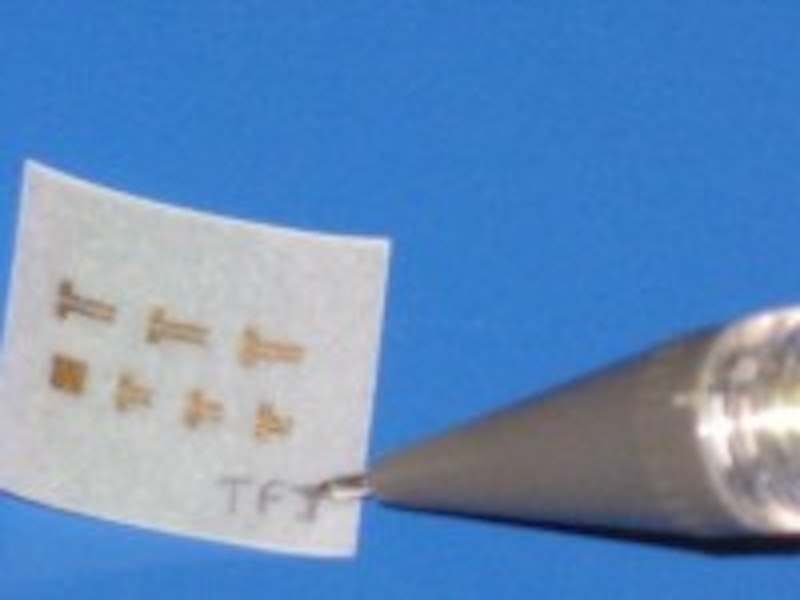 Electrochemical transistors have been printed onto paper by ACREO in Sweden and others and paper electronics, including transistors, is being researched by Abo Akademi, The University of Helsinki and others.
Biopolymers such as paper offer the possibility of creating electronics at very low costs that may even be biodegradable. This work traditionally involves organic inks and, because of the challenging topology, the resulting transistors usually have limited performance. Indeed, some take several seconds to switch. Now attention is turning to Field Effect Transistors FETs because, as with traditional silicon chips, they are the favoured structure to give best performance for most of the potential marketplace.
In Portugal, an elegant new field effect transistor with paper as the dielectric layer has now been developed by Elvira Fortunato and her colleagues of the Centro de Ingestigacao de Materiais at Faculdade de Ciencias e Tecnologia, Universidade Nova de Lisboa, Portugal.
Unusually, the new devices have the paper doubling as both dielectric layer and substrate. Paper, being mostly cellulose, is electric insulating and a fairly good dielectric. The team from Cenimat/I3N, led by Elvira Fortunato and Rodrigo Martins, used a single sheet of common paper as dielectric layer on which semiconducting oxides were printing on both sides. IDTechEx wonder what voltage is needed because this is presumably rather thick as dielectric layer and it will not have a very fhigh permittivity. However, the idea is a good one and perhaps the next versions could use the high strength thin paper that we recently featured in an article "Nonopaper is stronger than cast iron" July 22.
"It is a two in one," says Elvira Fortunato regarding the fact that the paper sheet works as substrate and interstrate at the same time. Better still, she says that the electrical characteristics of the new transistor are closely similar to those of inorganic oxide thin film transistors and therefore much better amorphous silicon transistors. Disposable electronic circuits, paper displays, smart labels, smart packaging, biosensing systems, RFID tags and other devices may result. The results will be published in the IEEE Electron Device Letters in September.
For more information visit the New University of Lisbon website at www.unl.pt