IDTechEx recently visited NanoGram in Milpitas, CA, who are a very successful start up company. Since its foundation twelve years ago, the company has spun out and sold a battery company for $48 million (NanoGram Devices) and has also spun out the $100+ million Neophotonics. More recently, NanoGram has developed gaseous-deposited silicon for photovoltaics and silicon inks for printed electronics based on its proprietary laser pyrolysis process.
The company aims to become a product company rather than a technology licensor. Silicon offers high performance, robustness and long working lifetimes, but the cost of conventional wafer based manufacturing restricts its applications. NanoGram has developed processes to make large area, thin layers of silicon cheaply through the additive process of printing nano-Si based inks.

Key to silicon ink manufacture is to achieve the appropriate particle sizes and size distributions, which enable low temperature processing when the ink is used to create devices. The particle sizes in a given measure need to be within a controlled distribution, and the particles need to be non-agglomerated. In addition, particle oxidation needs to be avoided in order to achieve high performance in printed electronic devices. Stable inks must also be formulated from these particles to be compatible with standard printing techniques such as ink jet printing and wide area coating.
NanoGram has developed the techniques to make such particles and inks. The company's patented technology involves injecting silicon compounds in a gaseous phase (such as silane gas) into an optically modified laser beam field, whereby the huge amount of energy absorbed by the precursor breaks the compounds into its constituent materials, such as silicon metal and hydrogen which reform in the reaction zone to form pure silicon nano particles and hydrogen gas. The silicon nano particles are immediately and rapidly cooled as they exit the reaction zone to freeze the particle size and crystallinity and are collected in a filter.
NanoGram has also developed techniques for doping the silicon particles during the reaction in highly controllable doping levels. Once collected, the particles are used to formulate silicon inks. To make directly deposited dense silicon films for photovoltaic cells, the silicon is recrystallized directly on the substrate, as shown in the diagram below, instead of being quenched and collected as particles. This process is highly scalable and NanoGram already has significant capacity to make the silicon material to support initial commercialization.
NanoGram's Laser Reactive Deposition (LRD) technology 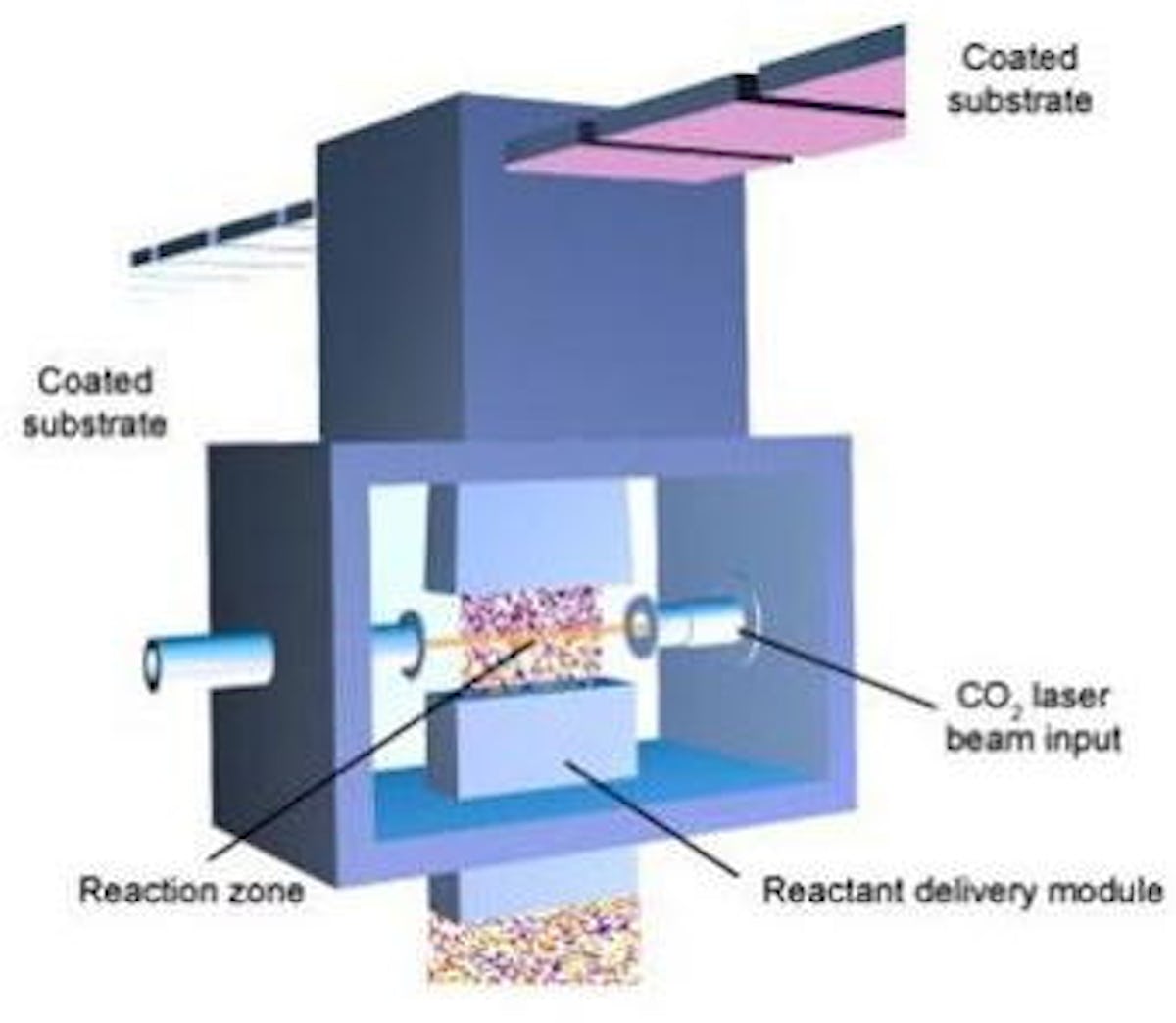 Source: NanoGram
NanoGram says that alternatively you can make silicon inks using chemical reactions, cross-linking and polymerization processes etc but this does not easily allow for doped particles, high purity, or tight size distribution. Using different precursors NanoGram can also formulate a range of materials including dielectrics. The particles can then be formulated into inks, which can be deposited by inkjet printing, for example.

Speaking to Raghu Das of IDTechEx, NanoGram CEO Dr Kieran Drain outlined the company's focus on its 35µm multi-crystalline silicon technology (mc-Si), called SilFoil™. The cost in volume of these photovoltaic cells can be significantly cheaper than conventional wafer based silicon cells, easily able to compete with the cost of CIGS or CdTe in similar volume, while offering a much higher efficiency compared to either of those technologies.
NanoGram is now structuring this activity as a focused product company, NanoGram Solar. Here, the silicon is deposited on a substrate after the high-rate cooling (rather than formulated into an ink and deposited), creating large grain multi crystalline silicon cells, which IDTechEx saw samples of. The company has developed IP on both cell and module manufacturing. A 5MW line is due to be completed in Q1 2010 for pre production devices, with a 50MW line to follow next year.

Another of NanoGram's focus is on transistors, and one application is display backplanes. Within a few months of development, the company has passed the mobility of amorphous silicon, and believes that mobility in the range of >100cm2/Vs is achievable, although for display backplanes that is not needed.
While the sintering temperature of the deposited transistors is confidential, IDTechEx note that Teijin, the plastic substrate supplier, is a partner of NanoGram involved in a joint development agreement (JDA) to develope silicon inks for flexible electronic applications. In addition, NanoGram investors include a wide range of companies with a number from Japan, given that one of the largest applications will be display backplanes.
For more information, see www.nanogram.com

. NanoGram will be presenting on their technology at the IDTechEx Printed Electronics USA conference and exhibition, in San Jose CA, December 2-3 2009.