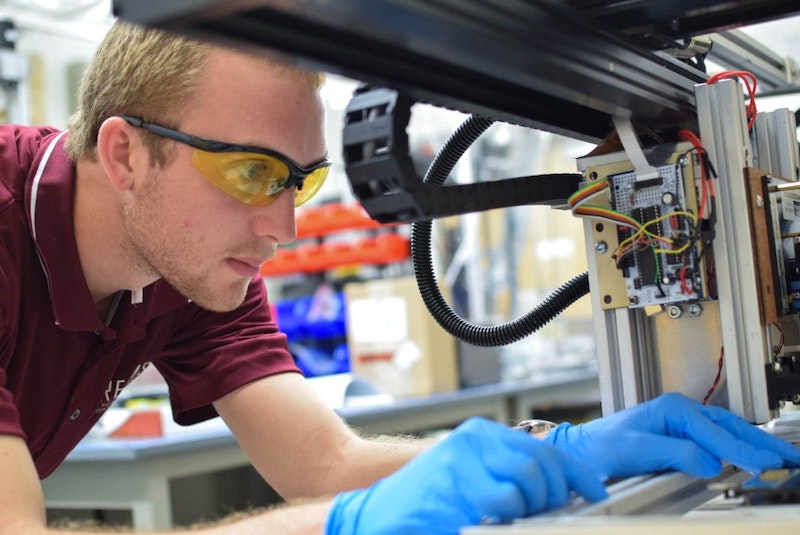 An interdisciplinary team of researchers at Virginia Tech's Macromolecules Innovation Institute (MII) have developed a new process to 3D print one of the most-desired materials in the electronics and aerospace industries. For more information see the IDTechEx report on 3D Printing Materials 2018-2028.
This material, commonly known by its trade name Kapton, is a polyimide with exceptional thermal and electrical properties. Kapton has a degradation temperature around 550 degrees Celsius, doesn't dissolve in solvents, acts as an electrical insulator, and is resistant to ultraviolet irradiation. Because the molecule is all-aromatic, containing rings that restrict rotation, Kapton is also very stable.
"(Kapton) can withstand all kinds of harsh environmental insults: radiation, high temperature, chemical reagents," said Timothy Long, a professor of chemistry, the director of MII, and one of the researchers in the study. "It's one of these molecules that is the ultimate in terms of performance."
Kapton was previously available only in thin 2D sheets and is known as the basis for the "gold foil" that wraps around satellites to insulate them.
But last year, Long and other collaborators in the College of Science and the College of Engineering discovered a path to 3D printing Kapton for the first time using a process called stereolithography.
The researchers, from the Long Group in the Department of Chemistry and the Design, Research, and Education for Additive Manufacturing Systems (DREAMS) Lab in the Department of Mechanical Engineering, have now found a second way to 3D print Kapton. This process, called direct ink write (DIW), was detailed in a recent article in ACS Applied Materials & Interfaces. The researchers now have greater flexibility in incorporating Kapton into manufacturing processes.
"If you think of caulking a bathtub or decorating a cake with icing, (DIW is) a very similar process," said Daniel Rau, one of the co-authors and a Ph.D. student in the DREAMS Lab. "Because it's so simple, (DIW) gives us incredible flexibility on the ink, synthesis, and the properties it has."
Even after 3D-printing the material via the DIW process, the subsequent parts had similar properties to the commercially available Kapton film. The DIW material has similar mechanical properties up to 400 °C, and its degradation temperature is 534 °C, only slightly lower than the commercial Kapton that degrades at 550 °C.
Applications for Kapton
Whereas the stereolithography process is better suited for 3D printing entire objects, direct ink write is better for printing multiple materials side-by-side, Rau said.
"All of the different additive manufacturing processes are like different tools in the workshop," Rau said. "You have hammers and that has its strengths. You have saws and that has its strengths."
Christopher Williams, director of the DREAMS Lab and associate director of MII, said that beyond multi-material printing, they can also now print Kapton directly onto an existing material, which stereolithography cannot do.
"As soon as we were able to print Kapton, people asked us about applications," Williams said. "The answer we often gave was printed electronics, but that's challenging to do in stereolithography. This new technique could really enable that as we look towards simultaneous printing of conductive materials and this excellent insulator."
Williams added that they can also now print Kapton on curved surfaces using direct ink write.
Interdisciplinary effort required
For the stereolithography study, Jana Herzberger, a postdoc in the Long Group and the other co-author of the study, created a precursor polymer to Kapton in liquid form. The liquid version wouldn't work for printing in direct ink write because it wouldn't hold its shape after being extruded from the printer. Instead, Herzberger synthesized an ink, also called a resin, with a viscosity similar to peanut butter.
"When Dr. Williams challenged us to modify the resin for the direct ink write process, we all thought it would be rather straightforward," Herzberger said. "It turned out that the 'easy' route didn't work, and we had to make some modifications to the original resin. Often times, I synthesized a resin and studied its rheological properties (rheology is the study of how a matter flows or moves in the presence of deformation), and Danny tested if it performed in the printer as we predicted. It was a new experience for me to work with engineers, and I think we learned a lot from each other and improved our communication skills quite a bit."
Herzberger and Rau went back and forth to find the right balance of an ink that she could synthesize and an ink that he could print.
"We both had to meet in the middle and make concessions and communicate," Rau said. "This was a great partnership — an iterative process — to make this ink printable. Neither of us had the knowledge to go from material creation to final part." Long emphasized the research was driven by the students' passion, not a top-down mandate from the lab directors. "My group makes macromolecules and Chris' group puts them into unique geometric shapes," Long said. "It's almost like one group working together to solve really complex questions like this."
Source and top image: Virginia Tech