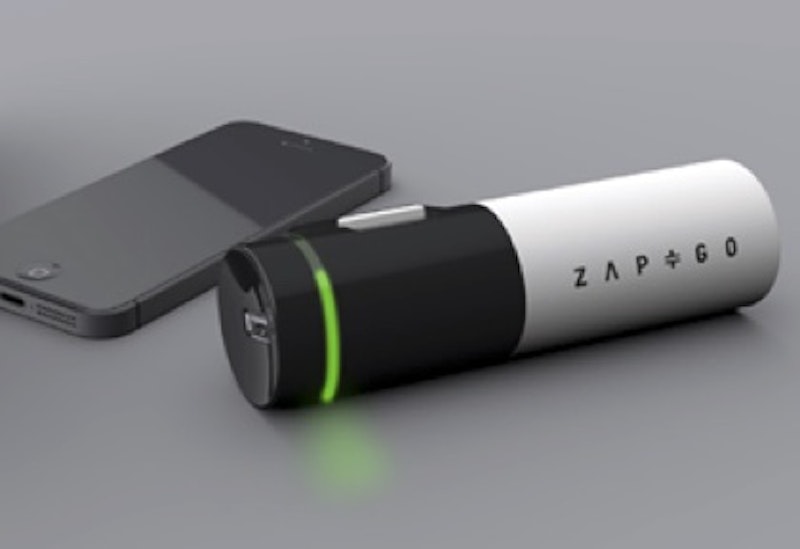 At IDTechEx we have invited a number of leading players in the graphene industry to write opinion pieces, reflecting on their produces, latest research, market insight, and commercialisation experience. We will be releasing these articles over the next few weeks.
This article is by Dr Stephen Voller, Chairman and Founder of Zapgocharger Ltd, a company commercialising flexible graphene supercapacitors.
To learn more about the industry, please refer to our report Graphene and 2D Materials: Markets, Technologies, and Opportunities 2015-2025 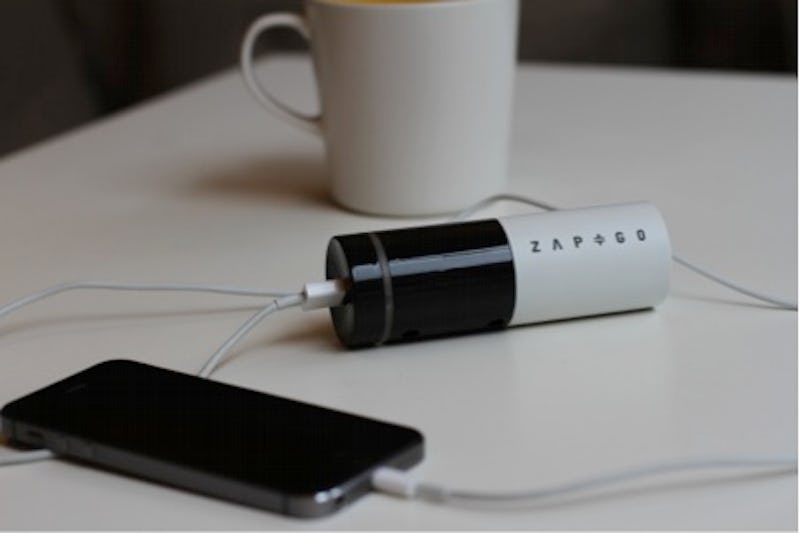 Our phones, tablets and notebooks have advanced rapidly in recent years and become an indispensable tool in our daily lives. Predictions from eMarketer estimate that 7 out of 10 people on the planet will use a mobile phone regularly by 2017.
Despite the incredible advances in high resolution displays and stunning apps, the phones and tablets still use lithium-ion (Li-ion) battery technology that was first developed some 30 years ago. Although continually improving, Li-ion suffers three major drawbacks. First it cannot be charged quickly: if overcharged there is a risk of fire or even an explosion. Second, many Li-ion batteries suffer a memory effect after about 1,000 charge/discharge cycles and the performance reduces significantly. Third, Li-ion batteries are difficult to recycle.
We all cope with these drawbacks because we depend on our phones so much, but wouldn't it be great if there was a better technology?
Well now there is in the form of our graphene supercapacitors.
Graphene was first discovered by two Nobel Prize winning scientists at the University of Manchester about 10 years ago. It is a single layer of carbon atoms, known as a 2-Dimensional (2-D) material because it is only 1 atom thick. Graphene is a very, very good conductor of electricity.
A supercapacitor is different from a battery because it builds charge almost instantly on conductive electrodes. Batteries like Li-ion rely on a chemical reaction to charge and discharge, while charging and discharging a supercapacitor is more like static electricity.

Higher voltage graphene supercapacitors
Phones and tablets use USB ports to charge, which output at 5V. Most common are USB 1.0 ports that output at 5V and 1A. These are used for phones. Tablets usually need a USB 2.0 port which output at 5V and 2.1A. http://en.wikipedia.org/wiki/USB. You can charge an iPhone from a USB 2.0 port, but it won't charge any quicker. The control chip inside limits the charge to 1A. But you can't charge a tablet such as an iPad from a USB 1.0 port. (At this stage we can't charge laptops or notebooks that use the USB-C port).
Existing supercapacitors generally output at 2.7V. Using this voltage would be very inefficient if we had to step it up to 5V. Our goal is to produce a supercapacitor working at 6V so we can produce a much more efficient output when we step down to 5V.
This is made possible by combining the highly conductive properties of graphene with a new type of electrolyte. Graphene, in the original definition as a single layer of carbon atoms, is not actually that effective in supercapacitors. We use a mixture of graphene composites that include graphene with multiple layers and other carbon nano-structures. We also use a different form of electrolyte that is non-flammable, so we can operate the supercapacitor at a higher voltage. 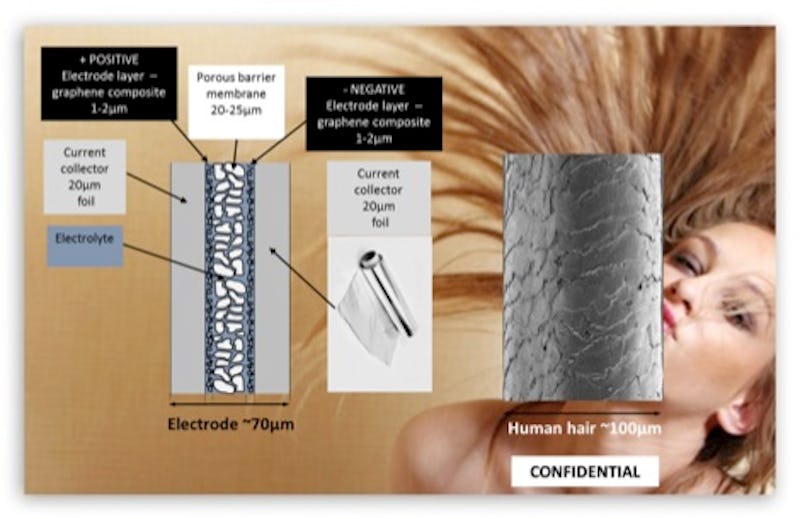 We put the layers of graphene composites and electrolyte together with some specially coated thin foils and porous barrier layers to form a complete supercapacitor electrode just 70 µm (micro-metres) thick. To put this in context a human hair is about 100 µm.
Power supply
The Zap&Go graphene supercapacitor charger is made simple on the outside, but the inside includes a great deal of innovation.
First we have to develop a power supply that can provide enough energy into the charger in 5 minutes. This is considerably different to the power supply you currently use to charge your phone or tablet. It is more like a laptop power supply and we have to deal with some quite high currents or amperes (A), up to 18A. We obviously have to do this safely, meet international standards and cater for the different power supply voltages around the world. These can vary from 110 volts (V) in North America, to 220V in South America and 230V in Europe.
We are highly sceptical about some claims on the internet of devices that can charge phones in 60 seconds or even 30 seconds. A 30 second charger would need a power supply 10x bigger or 180A. This is unlikely to be portable.
You may have a back-up charger or 'power bank' based on a lithium-ion battery that you use to charge your phone while you are travelling. These work great if you remember to keep them charged. Some can take 6-7 hours to recharge and are best charged overnight. The power supplies used to charge these are similar to your phone power supply, or they may charge from a regular Universal Serial Bus (USB) port. 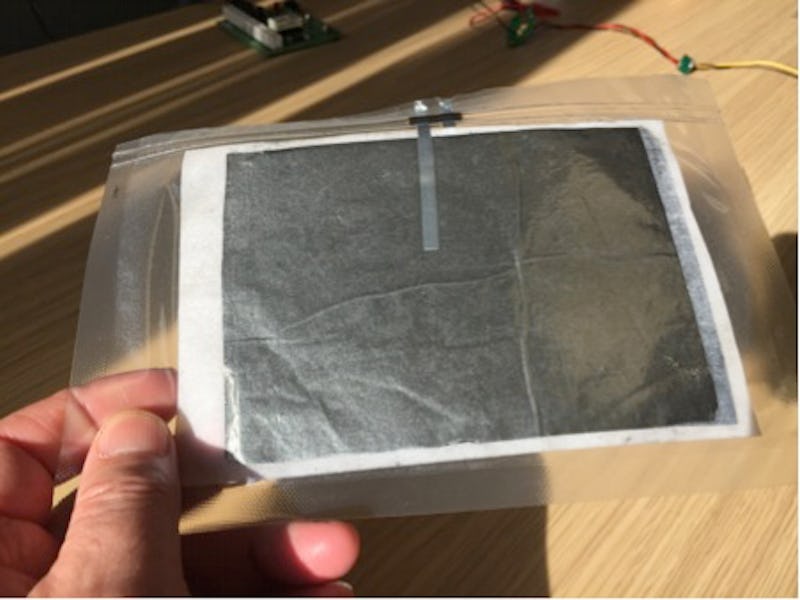 Zap&Go flexible thin film supercapacitor with electrodes thinner than a human hair
Safety
Safety is our No. 1 consideration. Much of the volatility over Li-ion batteries results from overcharging or overheating. This can affect not only the lithium inside, but also the electrolyte used inside the batteries.
Our products do not contain any lithium; we also use non-flammable electrolytes that can operate at these higher voltages.
Wireless charging
Wireless charging is great because you don't have to carry a charge cable. Very few phones support wireless charging at present, but you can buy a connector that clips onto the USB port on your phone so you can place it on a charging mat or connection. For wireless charging to work, you do need some form of physical connection with the charger. A phone such as Sony Xperia has wireless charging built in, and you touch it to a compatible charge surface.
Today two different wireless charging standards are emerging, and Zap&Go is investigating both of them. Qi Technology from the Wireless Power Consortium is working with Microsoft, Verizon, Samsung and Sony, generally for phones and lower-power devices. Alliance for Wireless Power (A4WP) uses similar technology but can transmit higher levels of power. A4WP members include Canon, Dell, HTC, Intel, and Qualcomm. A4WP can also be used for cordless power tools and cleaners. Both Qi and A4WP require a compatible device to be placed on a special surface or charging mat.
Recycling and sustainability
One key criterion for us is to provide environmentally friendly end-of-life recycling for the Zap&Go Charger. It is difficult to recycle lithium-ion batteries because they often contain compounds that contain cobalt or nickel. The Zap&Go contains none of these metals, and is therefore much better and easier to recycle.
For further information:
Zapgocharger Ltd
Oxford University Begbroke Science Park
Sandy Lane
Oxford
OX5 1PF, UK
info@zapgocharger.com
Telephone : +44 1865 309 660
www.zapgocharger.com

Learn more at the next leading event on the topic: Graphene & 2D Materials Europe 2020