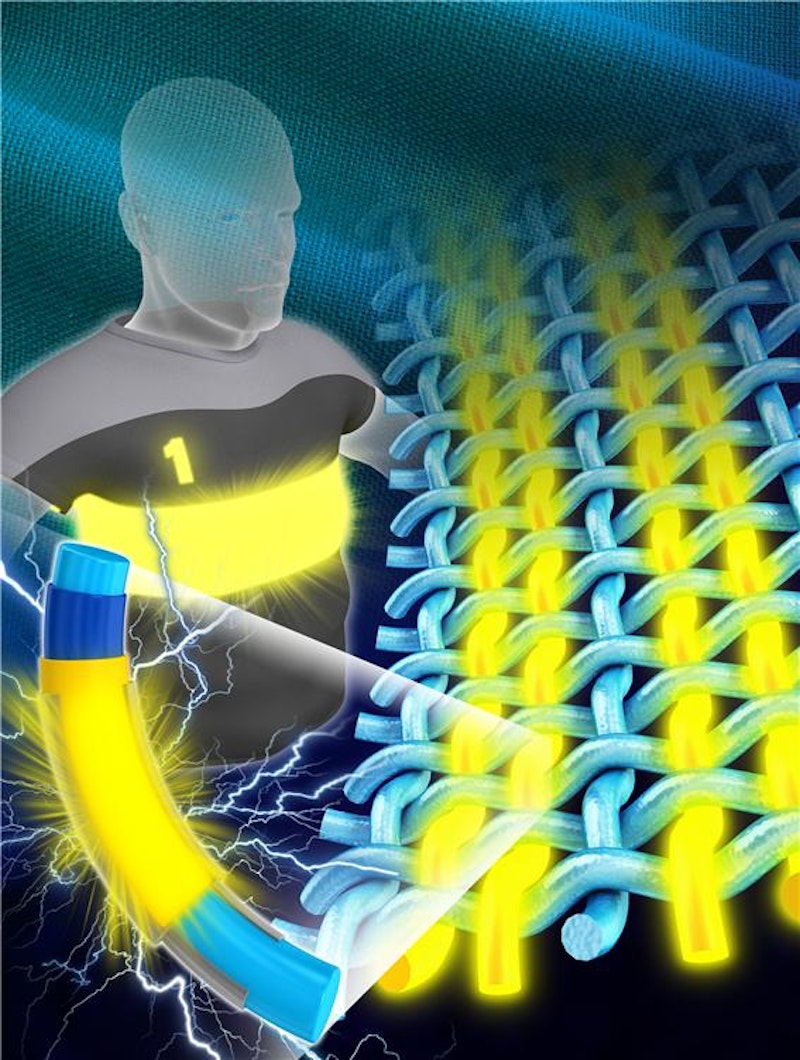 Professor Kyung-Cheol Choi and his research team from the School of Electrical Engineering at KAIST have developed fiber-like light-emitting diodes (LEDs), which can be applied in wearable displays. The research findings were published online in the July 14th issue of Advanced Electronic Materials.
Traditional wearable displays were manufactured on a hard substrate, which was later attached to the surface of clothes. This technique had limited applications for wearable displays because they were inflexible and ignored the characteristics of fabric.
To solve this problem, the research team discarded the notion of creating light-emitting diode displays on a plane. Instead, they focused on fibers, a component of fabrics, and developed a fiber-like LED that shared the characteristics of both fabrics and displays.
The essence of this technology, the dip-coating process, is to immerse and extract a three dimensional (3-D) rod (a polyethylene terephthalate fiber) from a solution, which functions like thread. Then, the regular levels of organic materials are formed as layers on the thread.
The dip-coating process allows the layers of organic materials to be easily created on the fibers with a 3-D cylindrical structure, which had been difficult in existing processes such as heat-coating process. By controlling of the withdrawal rate of the fiber, the coating's thickness can also be adjusted to the hundreds of thousandths of a nanometer.
The researchers said that this technology would accelerate the commercialization of fiber-based wearable displays because it offers low-cost mass production using roll-to-roll processing, a technology applied to create electronic devices on a roll of flexible plastics or metal foils.
Professor Choi said, "Our research will become a core technology in developing light emitting diodes on fibers, which are fundamental elements of fabrics. We hope we can lower the barrier of wearable displays entering the market."
The lead author of the published paper, Seon-Il Kwon, added, "This technology will eventually allow the production of wearable displays to be as easy as making clothes."
Source and top image: KAIST
Learn more at the next leading event on the topic: Healthcare Sensor Innovations USA 2020