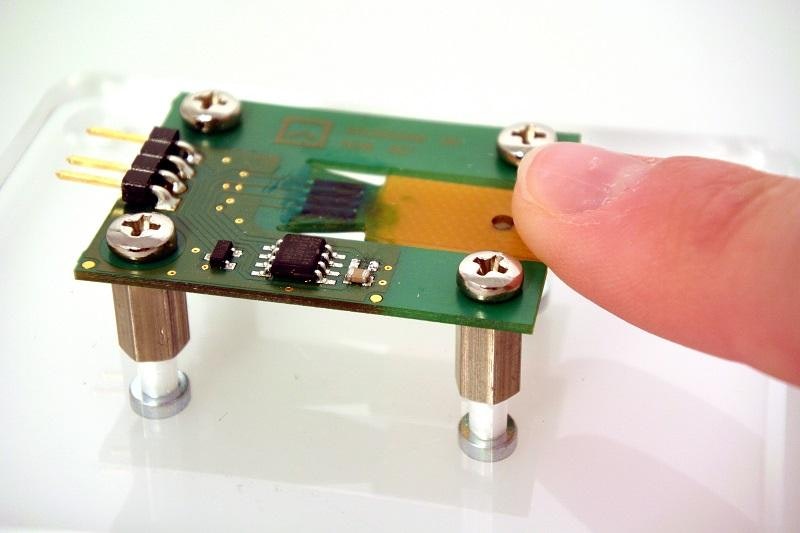 Pianists and other professional musicians that play piano have a problem. When they are traveling or are doing a concert on the road, using a full size piano is a major challenge and transportation costs can be high. Renting a locally sourced piano for a performance can also be expensive plus they may need to do a great deal of tuning to get the sound right. In addition, using a piano that they are not familiar with can put a crimp into their performance.
The typical option is an electric piano. Electric pianos are more compact and are much easier to ship and set up. However, many pianists don't like playing an electric piano because the keys, and the way they respond to touch, do not feel like a regular piano and they don't get the tone and volume control they expect.
The piano manufacturer Mario Aiwasian, Founder of Alpha Pianos GmbH, has solved that problem by using a patented sensor technology developed by Hoffmann + Krippner that essentially replaces the long strings inside a piano with electronic strain gage sensors. A pianist playing what that manufacturer calls an "e-piano" will note that the keys still look and feel the same as a regular acoustic piano. However, the felt hammers do not strike the usual two or three strings, but instead strike pressure sensors.
This technology was especially developed for the Alpha. These sensors essentially behave like piano strings but without the maintenance and tuning problems incurred by strings. With the aid of these sensors, the keystroke force and the resistance at the point of attack are detected. Also, as on a traditional grand piano, the force of the hammer head strike determines the volume.
The big advantage of a strain gage versus most other sensor technologies is that the strain gage is variable. The harder the key hits the gage surface, the bigger the electrical signal that is transmitted to the instrument's audio processor brain which converts the various current levels to the appropriate notes. Just like with a regular acoustic piano, the harder the piano key is hit, the larger the electrical signal, and the louder the note.
In addition to the advantage of being more compact and easier to ship, these new e-pianos from Alpha Pianos GmbH don't face the constant problems with tuning that string based pianos do. No matter the temperature, no matter the humidity - no matter how roughly the piano was bounced around during shipping, the sound of the individual keys stays the same.
What makes this new Hoffmann + Krippner strain gage technology even more compelling is that it can be used in a wide spectrum of audio and electronic equipment, not just keyboards. The strain gage's exceptional sensitivity, makes it perfect for applications like electronic drum pads, electric guitars, special effect boxes, DJ consoles, audio mixing suites, etc.
Hoffmann + Krippner is an industry leader for developing sensor paste technology that can be printed onto a PCB board. Their patented sensor paste technology printed onto a PCB board is a unique conductive material that is sensitive to slight pressures. By pushing on it, a small deformation to the paste can create a change of its electrical resistance that generates an analog signal that can be analyzed to provide input and control for a wide range of musical as well as non-musical applications.
As the strain gage can be directly printed on the application's PCB board - the P-DMS "tongue" - each individual gage does not need to be connected by wires. Instead of requiring wires and connectors, the processor and other electronic components can be directly mounted on the PCB board, making the entire device space-saving.
Source and top image: Jens Kautzor, CEO Hoffmann + Krippner