IDTechEx has invited a series of industrial players and leaders active in graphene commercialization to contribute their opinions about the state of the technology and markets. As part of the article series, we will today hear from Birla Carbon who writes about the progress of graphene in various industries. To contact Birla Carbon directly please contact the author Dr Yu Sun on sunelm@gmail.com
To learn more about the graphene markets please refer to our report on Graphene, 2D Materials, and Carbon Nanotubes 2016-2026: Markets, Technologies, and Opportunities. You can also meet with many industry leaders at our business-focused event Graphene Europe 2017 taking place on May 10th and 11th in Berlin, Germany.
This short article includes some of the recent development and future prospects of graphene application especially in 2016. The article is divided into three parts: 1. recent update on graphene fundamental research; 2. recent technology breakthrough and government policy update; 3. Future prospect on graphene application. 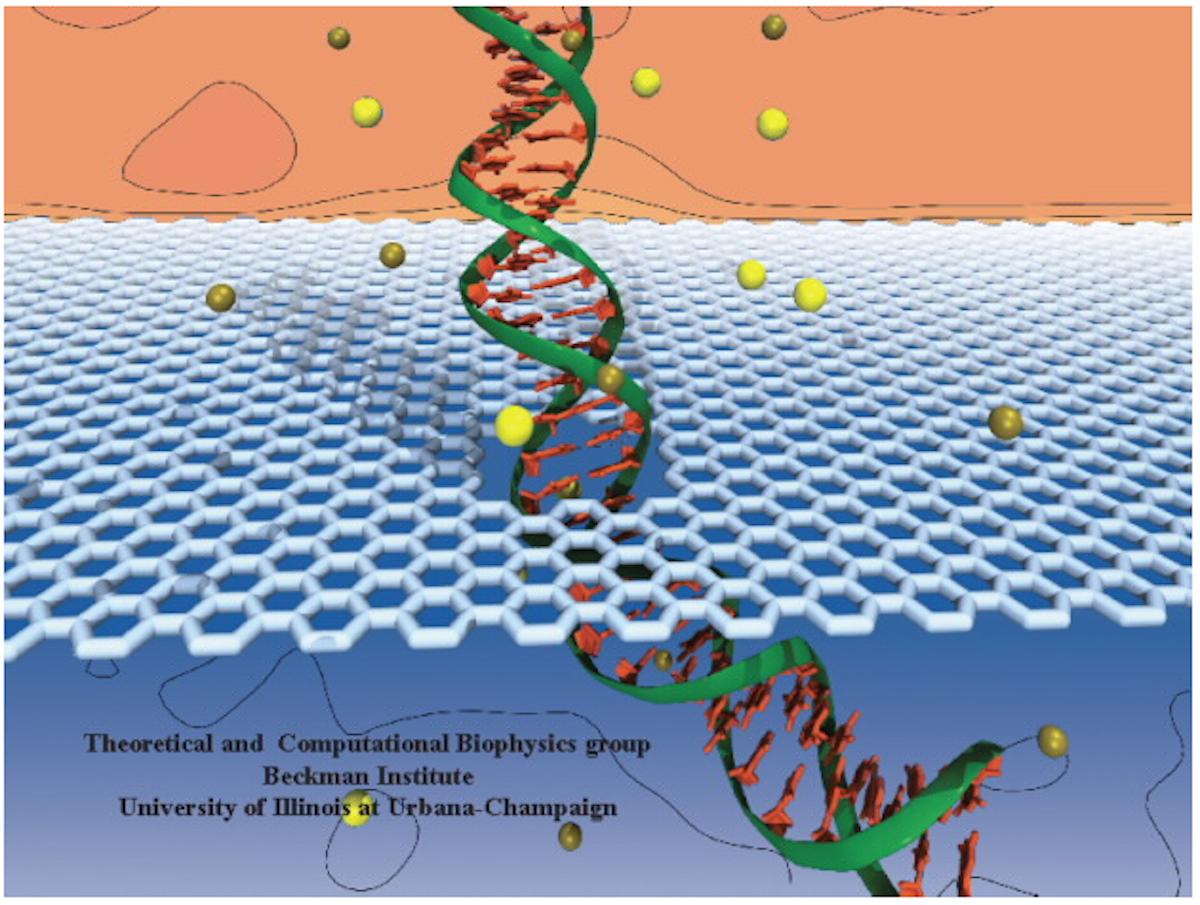 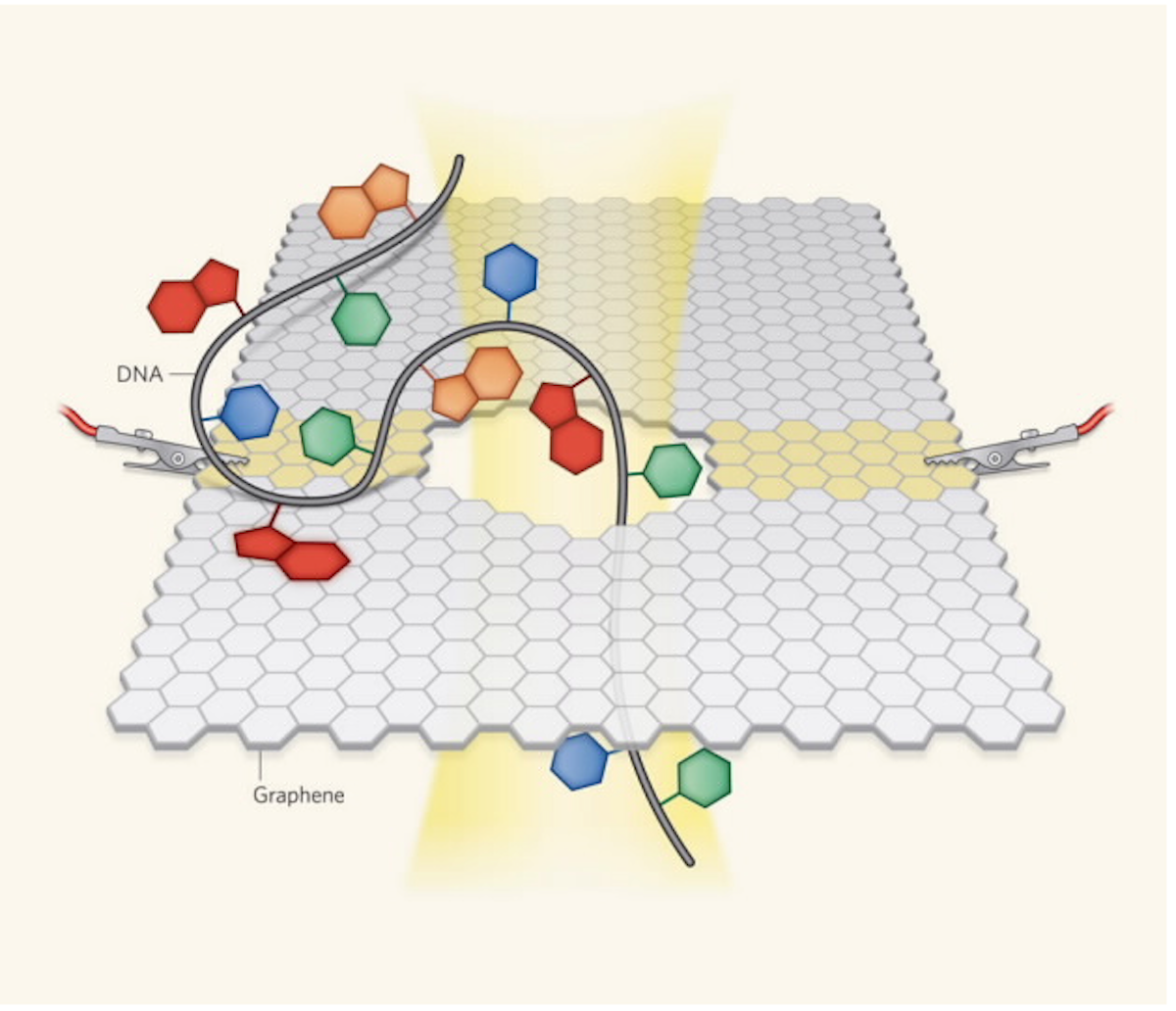 A recent very interesting graphene application is on biological and DNA sequencing (Shown above). After the graphene nano-sheet is connected on two electrodes and charged, closed circuit current flows between two electrodes. When the DNA sequence approaches the graphene nano-pore, the DNA is pulled to approach and go through the pore by electronic force. The C, G, A, T base pairs affect the electronic structure of the graphene and subsequently the electronic current by different degrees. That is why the base pairs can be differentiated.
Here it takes advantage of the flat and electronically conductive properties of the graphene nano-sheet. Distance between two base pairs is around 0.6 nm whereas thickness of graphene is 0.3 nm, which guarantees that the resolution of the base pairs can be determined.

Graphene has witnessed an extremely rapid growth pace in China, with China leading the role on the number of patent filing. United States ranked in the 2nd place but lag a lot behind in terms of patent filing numbers. Graphene has been regarded as one of the key strategic materials by the Chinese government, which can be found in the recent released documents on The Thirteen Five-year Plans of China (2016-2020) on Nov 29, 2016, one of the key guidelines and funding standards for innovation and scientific development. It is expected to see a booming development of Chinese graphene technology not only on fundamental research but on technology transfer and commercialization in the next 3 to 5 years. Some of the key applications to show prospect include but are not limited to military and aerospace painting, bullet proof vessel, electric wire and cable, battery materials, etc. Institutional analysis has considered 2016 the dawn of graphene age. 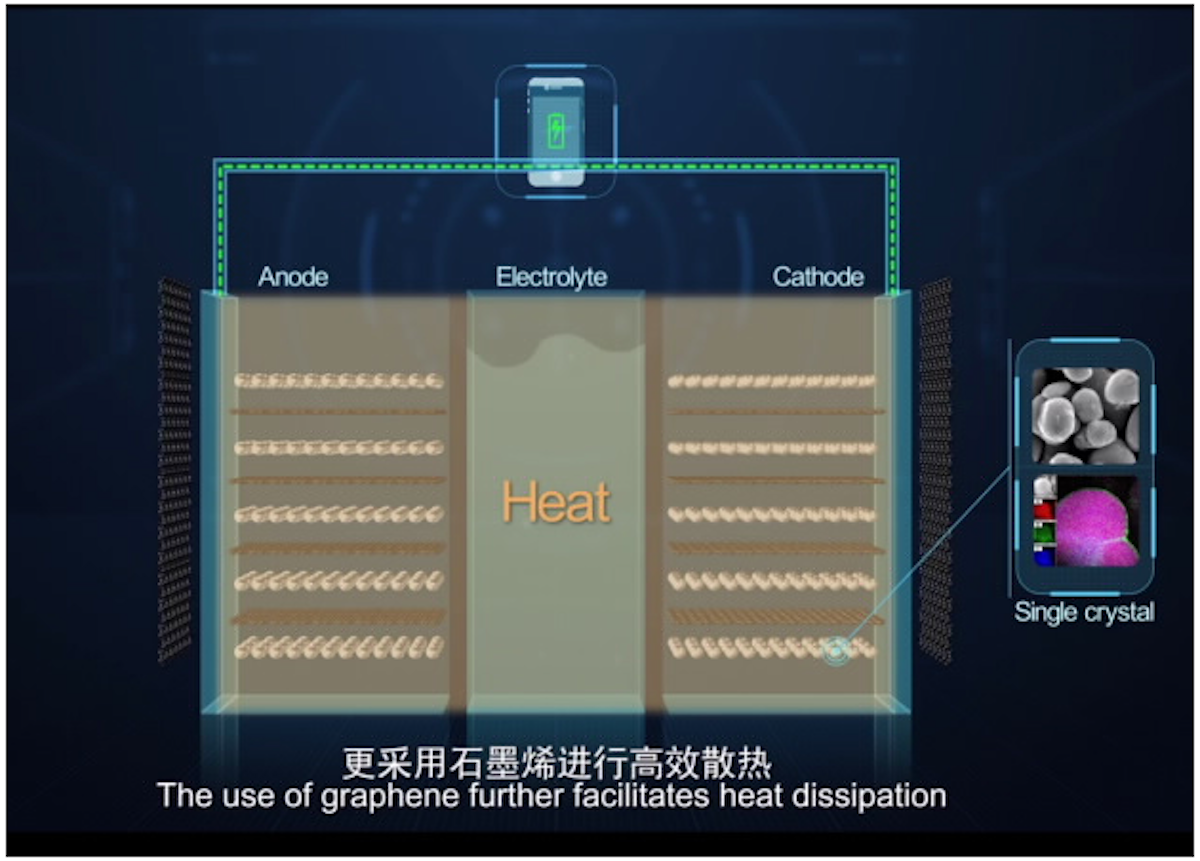 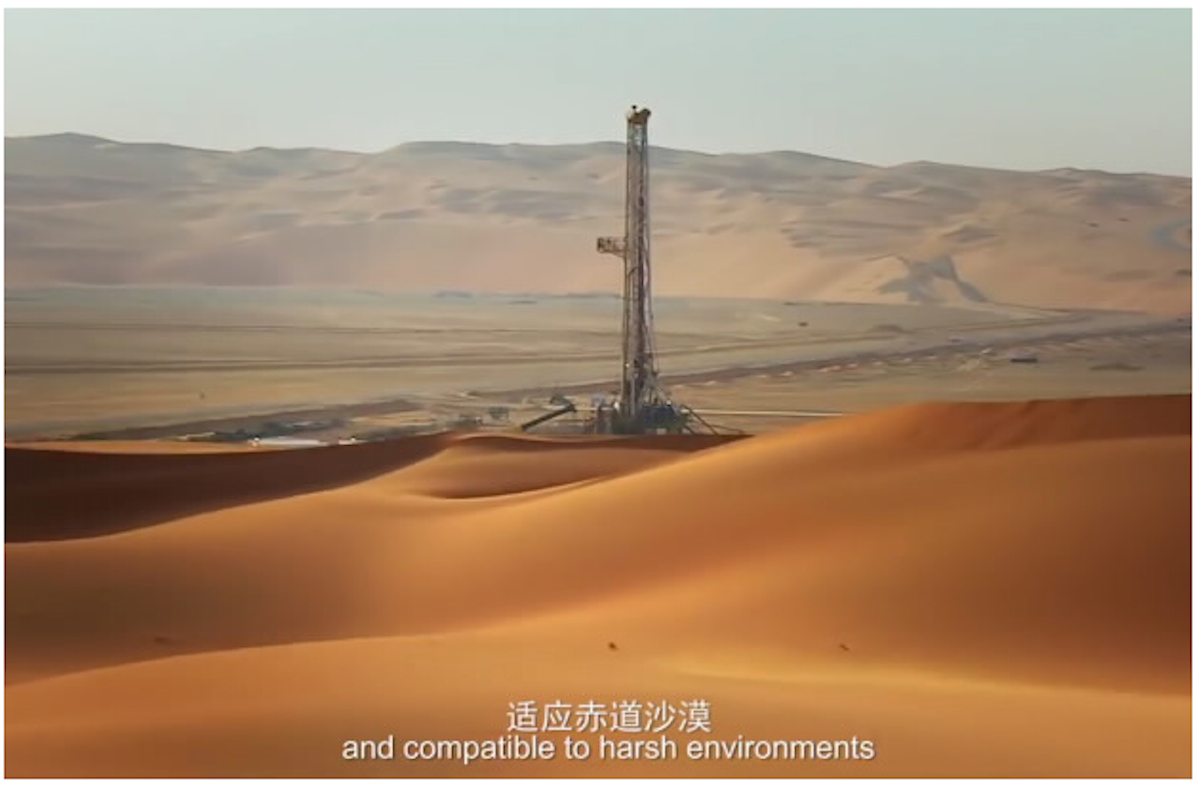 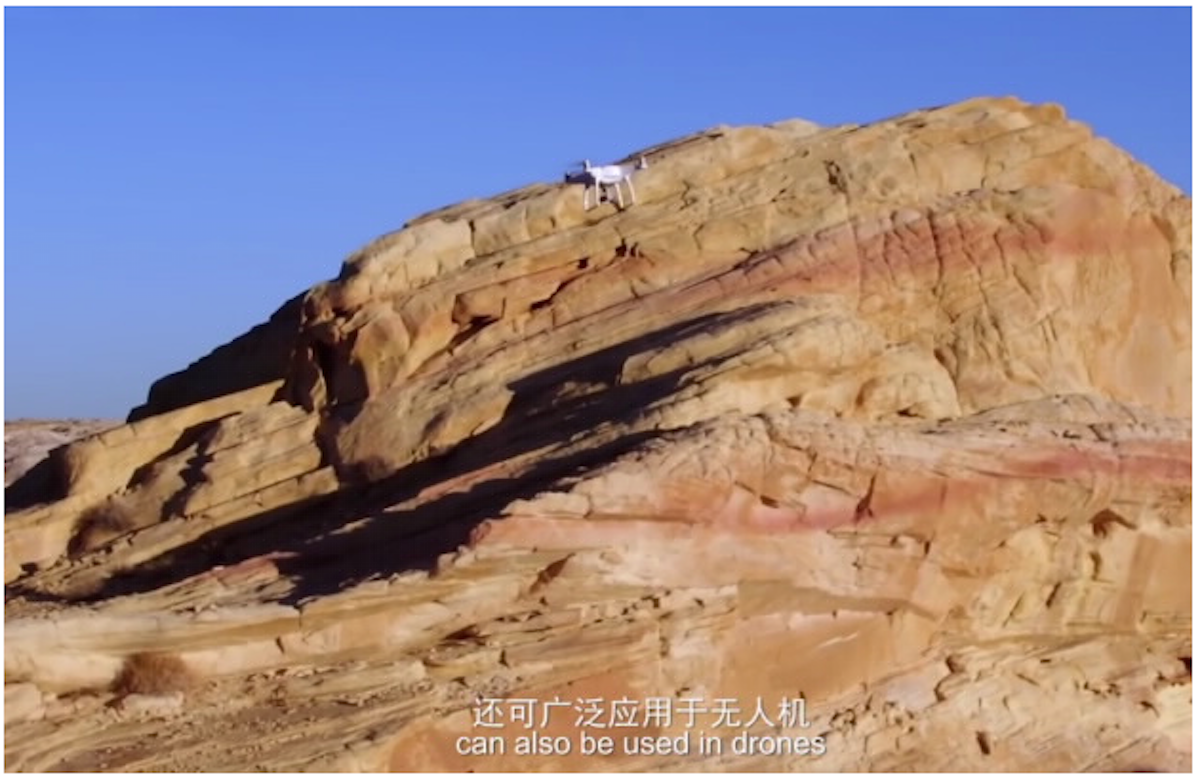 Above images show one of the representative applications on battery material from Huawei Watt Lab at Huawei North America Research Center. Huawei just announced its key development on graphene-assisted high temperature Li-ion Battery early December 2016. The battery can be used in Huawei's base station update all over the world. With the new battery technology, upper limit of the working temperature has increased by 10 ºC, and working life of the battery at 60 ºC has expanded the about two times compared to typical lithium-ion battery on market. This facilitates Huawei's base stations working in Africa especially in harsh environments like dessert. The battery can also be used in drones and electric cars especially when the drone needs to work in high temperature and dried condition such as Mid-East, Southeast Asia or North Africa, etc. 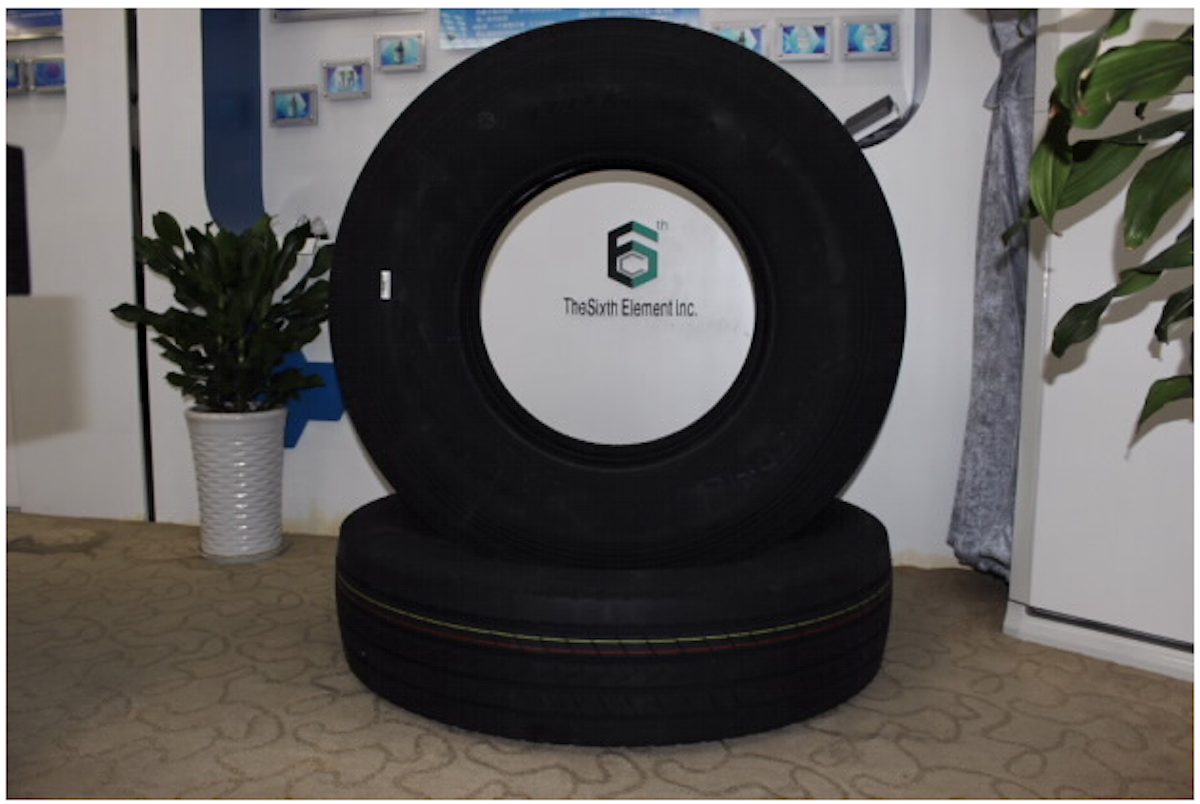 Another recent technology development is about graphene application on tires. Above image showed The Sixth Element, a Chinese graphene company, developed a prototype automotive tire with joint effort from a tire company. The use of graphene in the tire production can make it more wear resistant and puncture resistant and greatly improve the service life.
For instance, the State Key Laboratory of Polymer Materials Engineering in Sichuan University has developed the world's first graphene tire. Chinese Premier Li Keqiang made a special visit to the tire in the lab during his stay to Sichuan. Chinese tire manufacturers such as Double star Tire, has set up the first graphene tire lab. Ling long Tire has signed a contract with Beijing University of Chemical Technology for a joint research and development project to focus on graphene tire research as well. 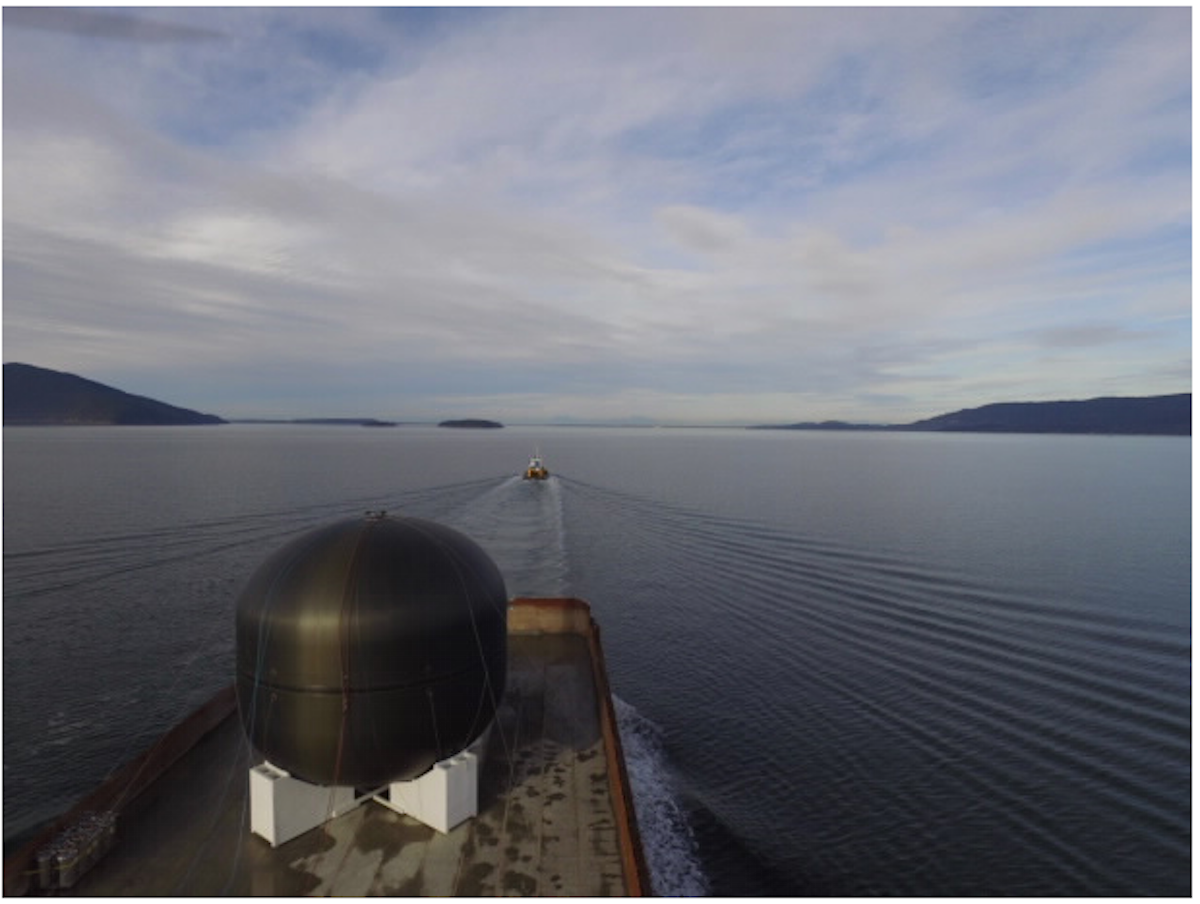 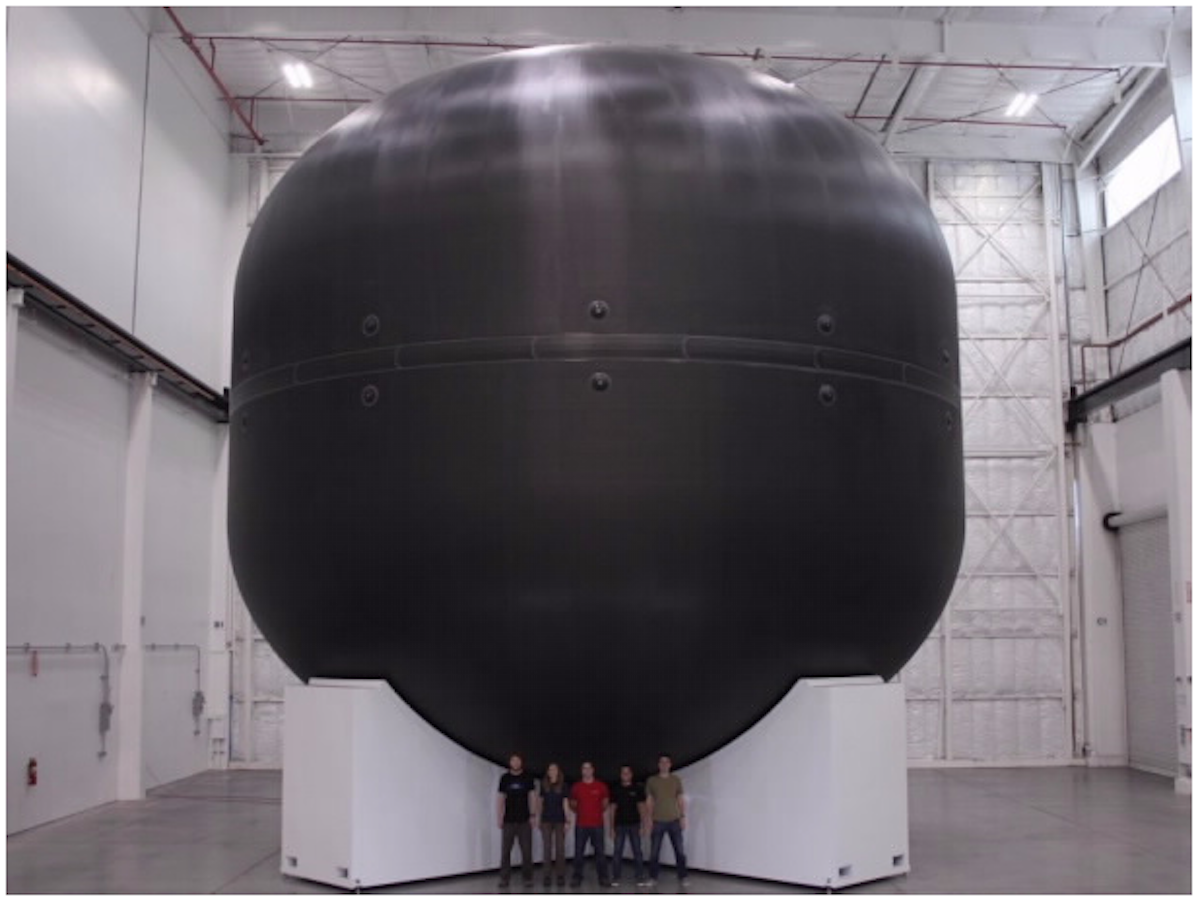 In September 2016, Elon Musk gave a phenomenal presentation on International Astronomical Congress (IAC) in Mexico. In the conference he discussed his Interplanetary Transport System (ITS) which plans to send human to Mars in 2025 with a very affordable price of only $200,000, a typical median house price in America. Among all of the key techniques he especially mentioned the gigantic carbon fiber orb for fuel storage in the spaceship. This is an extremely large tank which can be seen from comparison to the engineers standing by it (Above image). Liquid methane is used for the ITS, instead of the typical propellant liquid hydrogen that SpaceX has used in its previous rockets. "This is really the hardest part of the spaceship," Musk said in the conference, "...this was the trickiest one. So we wanted to tackle it first...."
It is very promising in future that graphene can play a role in such carbon fiber fuel tank for aerospace application. Graphene can decrease the total weight of the fuel tank while still keeps its hardness and strength. Lightweight is definitely a very crucial part in the spaceship especially for a long interplanetary odyssey. Graphene can increase the toughness of the tank, and it can also play a synergetic effect with carbon fiber to bridge the interface of the resin and carbon fibers since carbon fiber could be pre-impregnated with a resin to make it tougher. And it is also expected that graphene can help withstand the harsh cryo-environments of fuel tank. Not only for that, can graphene also be applied in aerospace ship backbone and cover materials as well.