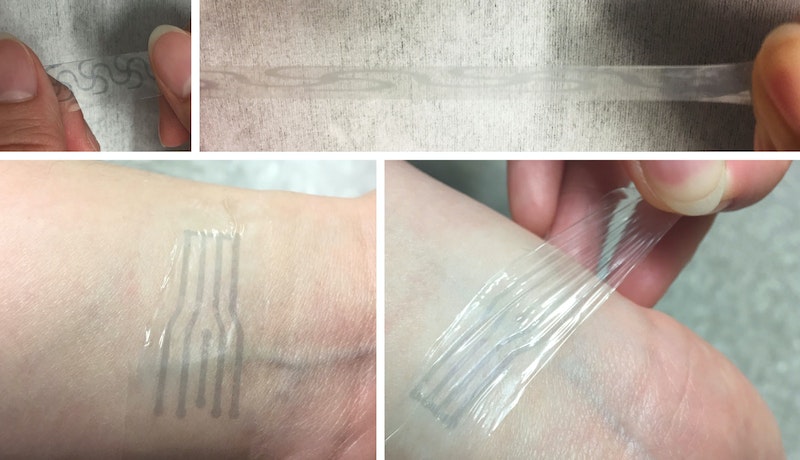 The brain is soft and electronics are stiff, which can make combining the two challenging, such as when neuroscientists implant electrodes to measure brain activity and perhaps deliver tiny jolts of electricity for pain relief or other purposes.
Chemical engineer Zhenan Bao is trying to change that. For more than a decade, her lab has been working to make electronics soft and flexible so that they feel and operate almost like a second skin. Along the way, the team has started to focus on making brittle plastics that can conduct electricity more elastic.
Now in Science Advances, Bao's team describes how they took one such brittle plastic and modified it chemically to make it as bendable as a rubber band, while slightly enhancing its electrical conductivity. The result is a soft, flexible electrode that is compatible with our supple and sensitive nerves.
"This flexible electrode opens up many new, exciting possibilities down the road for brain interfaces and other implantable electronics," said Bao, a professor of chemical engineering. "Here, we have a new material with uncompromised electrical performance and high stretchability."
The material is still a laboratory prototype, but the team hopes to develop it as part of their long-term focus on creating flexible materials that interface with the human body.
Flexible interface
Electrodes are fundamental to electronics. Conducting electricity, these wires carry back and forth signals that allow different components in a device to work together. In our brains, special thread-like fibers called axons play a similar role, transmitting electric impulses between neurons. Bao's stretchable plastic is designed to make a more seamless connection between the stiff world of electronics and the flexible organic electrodes in our bodies.
"One thing about the human brain that a lot of people don't know is that it changes volume throughout the day," says postdoctoral research fellow Yue Wang, the first author on the paper. "It swells and deswells." The current generation of electronic implants can't stretch and contract with the brain and make it complicated to maintain a good connection.
"If we have an electrode with a similar softness as the brain, it will form a better interface," said Wang.
To create this flexible electrode, the researchers began with a plastic that had two essential qualities: high conductivity and biocompatibility, meaning that it could be safely brought into contact with the human body. But this plastic had a shortcoming: It was very brittle. Stretching it even 5 percent would break it.
Tightly wound and brittle
As Bao and her team sought to preserve conductivity while adding flexibility, they worked with scientists at the SLAC National Accelerator Laboratory to use a special type of X-ray to study this material at the molecular level. All plastics are polymers; that is, chains of molecules strung together like beads. The plastic in this experiment was actually made up of two different polymers that were tightly wound together. One was the electrical conductor. The other polymer was essential to the process of making the plastic. When these two polymers combined they created a plastic that was like a string of brittle, sphere-like structures. It was conductive, but not flexible.
The researchers hypothesized that if they could find the right molecular additive to separate these two tightly wound polymers, they could prevent this crystallization and give the plastic more stretch. But they had to be careful - adding material to a conductor usually weakens its ability to transmit electrical signals.
After testing more than 20 different molecular additives, they finally found one that did the trick. It was a molecule similar to the sort of additives used to thicken soups in industrial kitchens. This additive transformed the plastic's chunky and brittle molecular structure into a fishnet pattern with holes in the strands to allow the material to stretch and deform. When they tested their new material's elasticity, they were delighted to find that it became slightly more conductive when stretched to twice its original length. The plastic remained very conductive even when stretched 800 percent its original length.
"We thought that if we add insulating material, we would get really poor conductivity, especially when we added so much," said Bao. But thanks to their precise understanding of how to tune the molecular assembly, the researchers got the best of both worlds: the highest possible conductivity for the plastic while at the same transforming it into a very robust and stretchy substance.
"By understanding the interaction at the molecular level, we can develop electronics that are soft and stretchy like skin, while remaining conductive," Wang says.
Source and top image: Stanford University
Learn more at the next leading event on the topic: Healthcare Sensor Innovations USA 2020