A carbon nanotube-coated "smart yarn" that conducts electricity could be woven into soft fabrics that detect blood and monitor health, engineers at the University of Michigan have demonstrated.
"Currently, smart textiles are made primarily of metallic or optical fibers. They're fragile. They're not comfortable. Metal fibers also corrode. There are problems with washing such electronic textiles. We have found a much simpler way - an elegant way - by combining two fibers, one natural and one created by nanotechnology," said Nicholas Kotov, a professor in the departments of Chemical Engineering, Materials Science and Engineering and Biomedical Engineering.
Kotov and Bongsup Shim, a doctoral student in the Department of Chemical Engineering, are among the co-authors of a paper on this material currently published online in Nano Letters.
To make these "e-textiles," the researchers dipped 1.5-millimeter thick cotton yarn into a solution of carbon nanotubes in water and then into a solution of a special sticky polymer in ethanol. After being dipped just a few times into both solutions and dried, the yarn was able to conduct enough power from a battery to illuminate a light-emitting diode device.
"This turns out to be very easy to do," Kotov said. "After just a few repetitions of the process, this normal cotton becomes a conductive material because carbon nanotubes are conductive."
The only perceptible change to the yarn is that it turned black, due to the carbon. It remained pliable and soft. 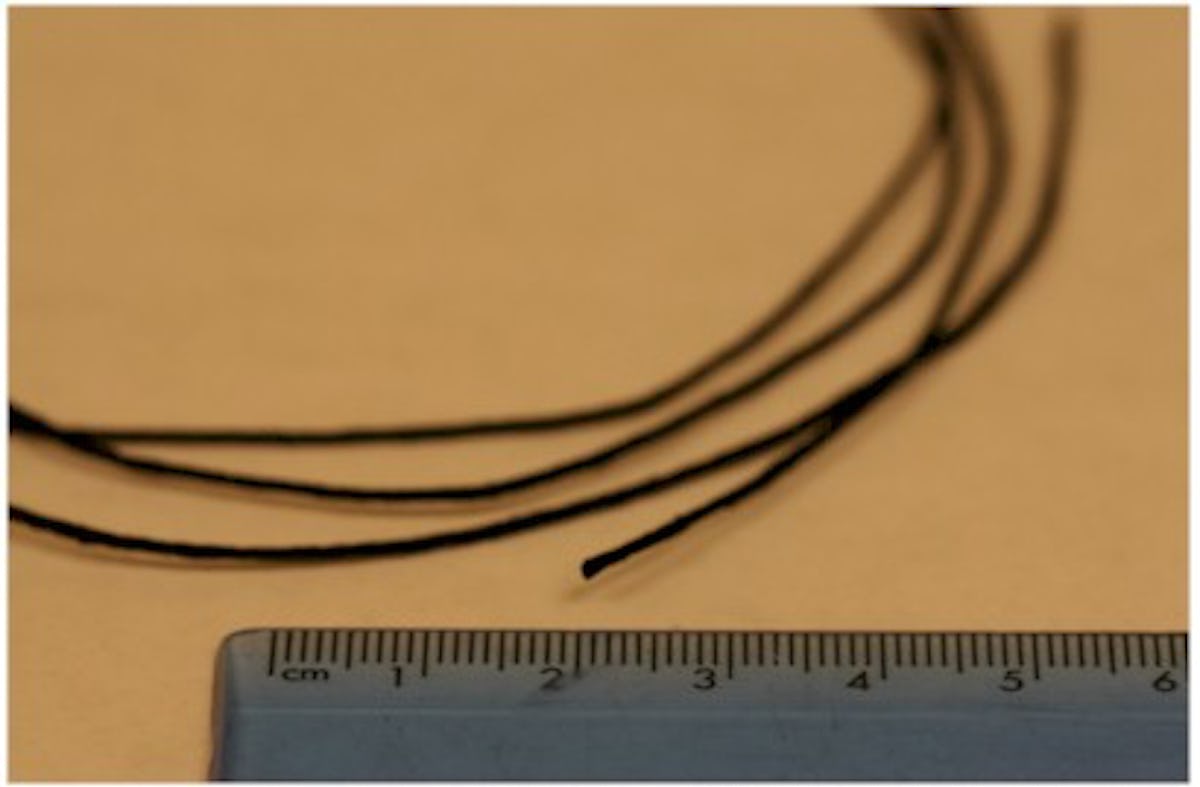 Regular yarn turned black when coated with electrically-conducting carbon nanotubes. Researchers say it can be woven into smart textiles that would be softer and more practical than current designs for electrically-conducting fabrics
In order to put this conductivity to use, the researchers added the antibody anti-albumin to the carbon nanotube solution. Anti-albumin reacts with albumin, a protein found in blood. When the researchers exposed their anti-albumin-infused smart yarn to albumin, they found that the conductivity significantly increased. Their new material is more sensitive and selective as well as more simple and durable than other electronic textiles, Kotov said.
Clothing that can detect blood could be useful in high-risk professions, the researchers say. An unconscious firefighter, ambushed soldier, or police officer in an accident, for example, couldn't send a distress signal to a central command post. But the smart clothing would have this capability.
Kotov says a communication device such as a mobile phone could conceivably transmit information from the clothing to a central command post.
"The concept of electrically sensitive clothing made of carbon-nanotube-coated cotton is flexible in implementations and can be adapted for a variety of health monitoring tasks as well as high performance garments," Kotov said.
It is conceivable that clothes made out of this material could be designed to harvest energy or store it, providing power for small electronic devices, but such developments are many years away and pose difficult challenges, the engineers say.
The paper published online in Nano Letters is titled, "Smart Electronic Yarns and Wearable Fabrics for Human Biomonitoring Made by Carbon Nanotube Coating with Polyelectrolytes." Other contributors are with Jiangnan University in China.
This research was funded by the National Science Foundation, the Office of Naval Research, the Air Force Office of Scientific Research and the National Natural Science Foundation of China.
Top image: This carbon-nanotube coated smart yarn can conduct enough electricity from a battery to power a light-emitting diode device. Researchers can use its conductivity to design garments that detect blood.
Source: Michigan University
For more attend Printed Electronics Europe 2009.