The world's first plastic diode operating in the Ultra-high frequency (UHF) band has been developed by IMEC (Belgium) and TNO (The Netherlands).
The rectifier is one of the most critical components for organic-electronic applications such as RFID-tags and is responsible for converting the electromagnetic energy of the incoming RF-signal captured by the antenna into a DC operating voltage that powers the transponder chip on the tag.
Plastic transponder chips that hold the promise of low cost tags have been demonstrated in the past however, the antenna itself forms a very significant part of the cost of an RFID tag. Antennas for the UHF frequency band (operating at 433MHz, 869MHz, 915 MHz) are smaller and lower cost than antennas for HF (13.56 MHz), therefore UHF is the preferred frequency band for ultra-low-cost tags.
For the first time, researchers have been able to make a UHF rectifier (operating at 433MHz and 869MHz) with a plastic diode making it a scientific breakthrough that paves the way for low-cost plastic electronic tags.

The rectifier was made using a 160nm thin film of purified pentacene sandwiched between Al and Au electrodes on glass. The diodes have a reverse breakdown voltage exceeding 25V and a charge carrier mobility of 0.15cm2/Vs.
The diodes where integrated with capacitors into rectifiers on a plastic foil as shown below. 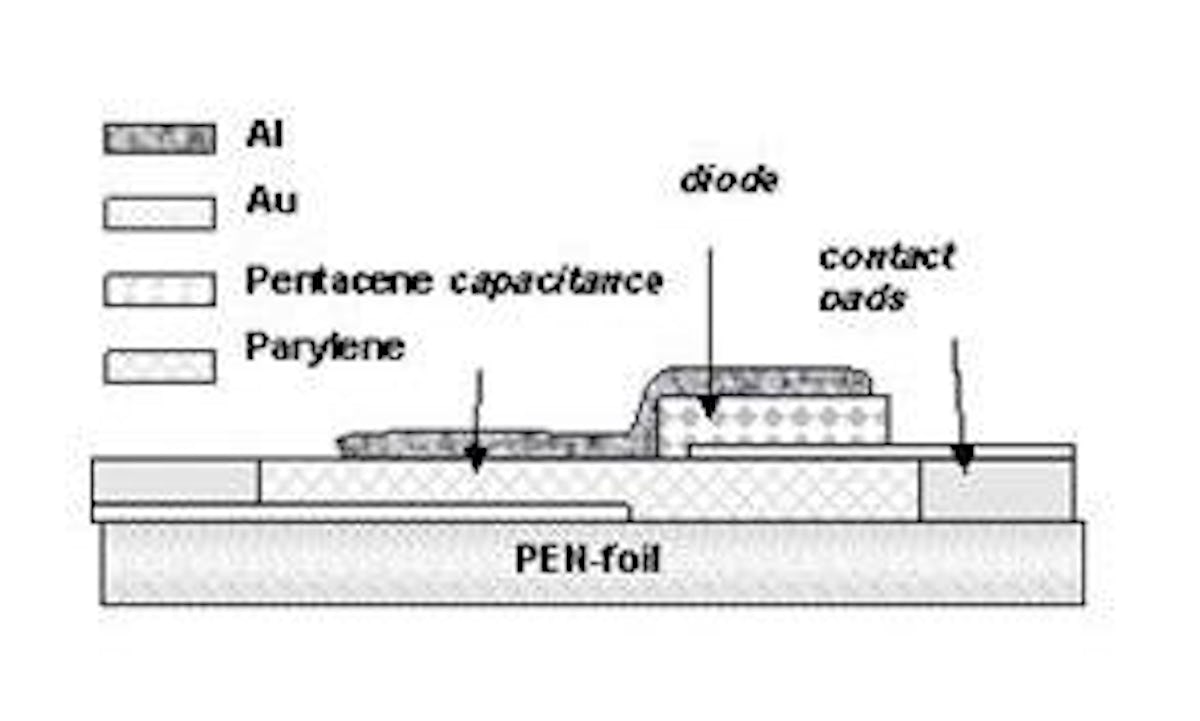 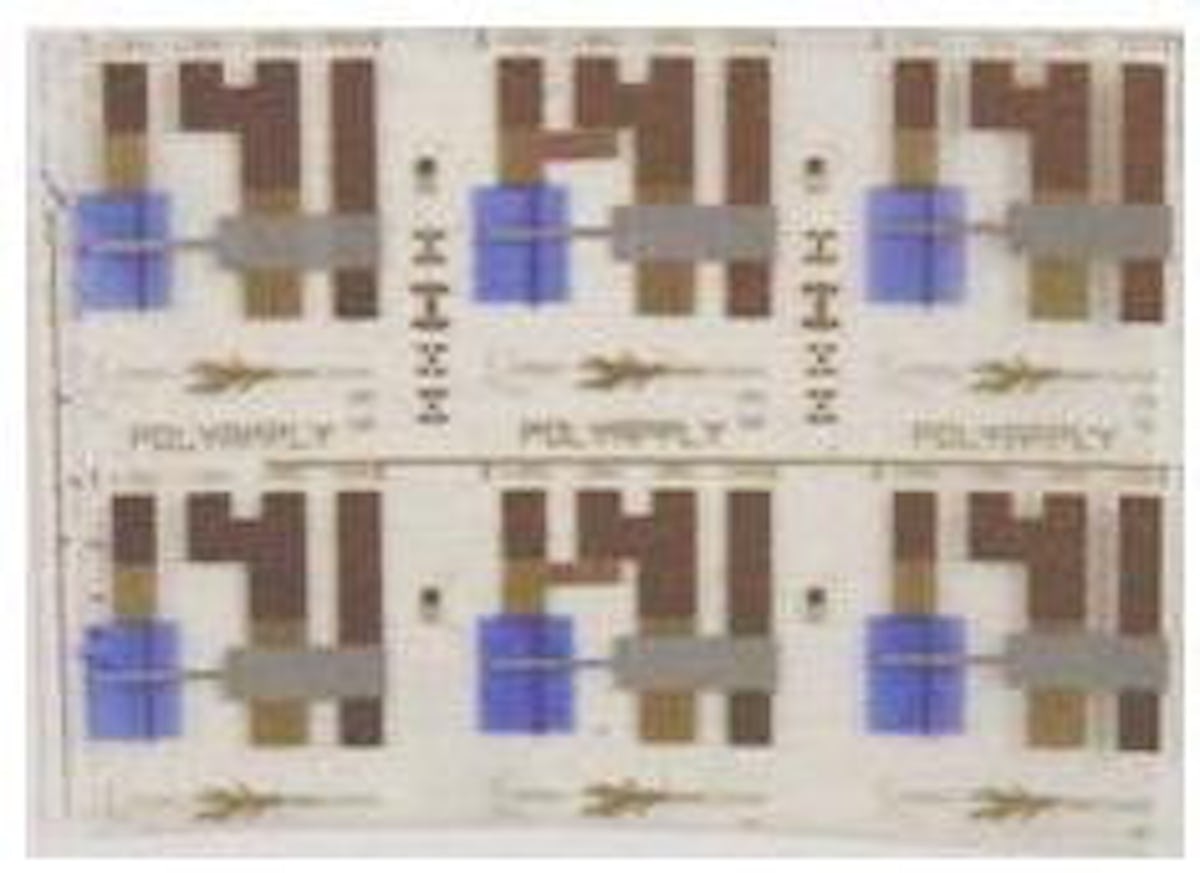 Integrated rectifier on foil (PEN - Polyethylennaphthalat) ; top panel: schematic
These integrated rectifiers operate up to a frequency of 869MHz (see below), the measurement results have been plotted over the full frequency range. The rectified DC voltage at 869 MHz is 4.5V. Further increases of the voltage level will be possible using a more complex rectifier. 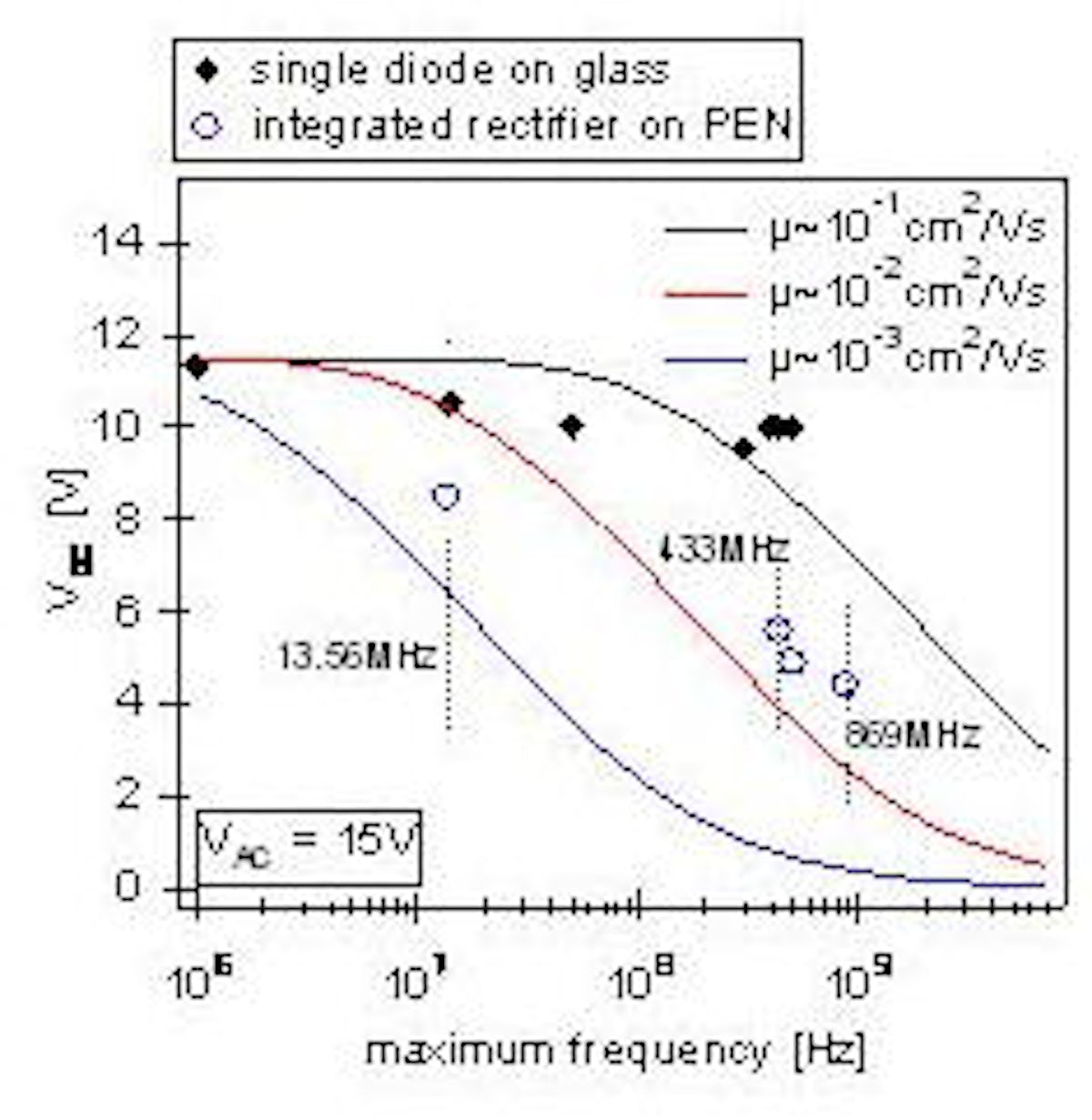 Frequency vs. rectified DC voltage. Lines: calculated achievable rectified voltage with plastic diodes in a rectifier configuration as a function of the frequency of the base carrier for various charge carrier mobilities assuming 160nm film thickness; Dots: measured performance of the rectifiers
The work was done within the framework of the Holst Centre research program on organic circuitry, in close collaboration between IMEC Leuven, Europe's largest independent research center in nano-electronics and nano-technology; TNO Eindhoven, the Dutch institute for applied scientific research and was co-funded by the European project POLYAPPLY.
Source: IEDM
Top image: Photograph of integrated plastic rectifiers on foil
For more attend Printed Electronics Europe 2009.