More power from bumps in the road 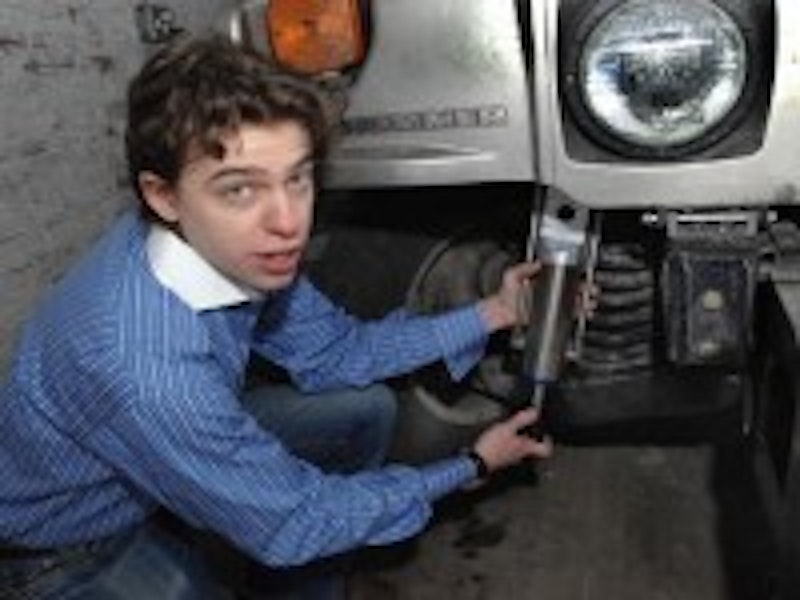 A shock absorber that harnesses energy from small bumps in the road could save a company such as Wal-Mart $13 million a year in fuel costs by converting its fleet of trucks.
A team of MIT undergraduate students has invented a shock absorber that harnesses energy from small bumps in the road, generating electricity while it smoothes the ride more effectively than conventional shocks. The students hope to initially find customers among companies that operate large fleets of heavy vehicles. They have already drawn interest from the U.S. military and several truck manufacturers and set up their own company to exploit the invention - Levant Power Corporation.
Senior Shakeel Avadhany and his team say they can produce up to a 10 percent improvement in overall vehicle fuel efficiency by using the regenerative shock absorbers. The company that produces Humvees for the army, and is currently working on development of the next-generation version of the all-purpose vehicle, is interested enough to have loaned them a vehicle for testing purposes.
The project came about because "we wanted to figure out where energy is being wasted in a vehicle," senior Zack Anderson explains. Some hybrid cars already do a good job of recovering the energy from braking, so the team looked elsewhere, and quickly homed in on the suspension.
They began by renting a variety of different car models, outfitting the suspension with sensors to determine the energy potential, and driving around with a laptop computer recording the sensor data. Their tests showed "a significant amount of energy was being wasted in conventional suspension systems," Anderson says, "especially for heavy vehicles."
Once they realized the possibilities, the students set about building a prototype system to harness the wasted power. Their prototype shock absorbers use a hydraulic system that forces fluid through a turbine attached to a generator. The system is controlled by an active electronic system that optimizes the damping, providing a smoother ride than conventional shocks while generating electricity to recharge the batteries or operate electrical equipment. 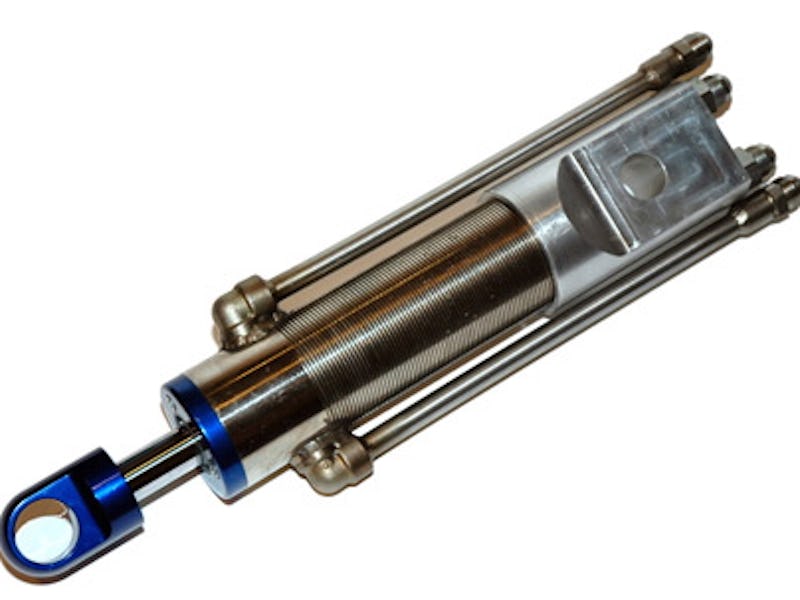 GenShock prototype. (Source MIT).
In their testing so far, the students found that in a 6-shock heavy truck, each shock absorber could generate up to an average of 1 kW on a standard road - enough power to completely displace the large alternator load in heavy trucks and military vehicles, and in some cases even run accessory devices such as hybrid trailer refrigeration units.
They filed for a patent last year and formed a company, called Levant Power Corp., to develop and commercialize the product. They are currently doing a series of tests with their converted Humvee to optimize the system's efficiency. They hope their technology will help give an edge to the military vehicle company in securing the expected $40 billion contract for the new army vehicle called the Joint Light Tactical Vehicle, or JLTV.
"They see it as something that's going to be a differentiator in the quest for that lucrative contract," says Avadhany. He adds, "It is a completely new paradigm of damping."
"Simply put - we want this technology on every heavy-truck, military vehicle and consumer hybrid on the road," Avadhany says.
The team has received help from MIT's Venture Mentoring Service, and has been advised by Yet-Ming Chiang, the Kyocera Professor of Ceramics in the Department of Materials Science and Engineering and founder of A123 Systems, a supplier of high-power lithium-ion batteries.
Not only would improved fuel efficiency be a big plus for the army by requiring less stockpiling and transportation of fuel into the war zone, but the better ride produced by the actively controlled shock absorbers make for safer handling, the students say. "If it's a smoother ride, you can go over the terrain faster," says Anderson.
The new shocks also have a fail-safe feature: If the electronics fail for any reason, the system simply acts like a regular shock absorber.
The group, which also includes senior Zachary Jackowski and alumni Paul Abel '08, Ryan Bavetta '07 and Vladimir Tarasov '08, plans to have a final, fine-tuned version of the device ready this summer. Then they will start talking to potential big customers. For example, they have calculated that a company such as Wal-Mart could save $13 million a year in fuel costs by converting its fleet of trucks.
Top image: Zack Anderson , senior in elecrical engineering and computer sciences, holds a GenShock prototype up to a Humvee coil spring where it is installed. (Source MIT).
Source: MIT
For more attend Printed Electronics Europe 2009. There are speakers from Nissan, Fiat (Research Center Fiat), the $37 billion BAE Systems (EVs for land, sea and air, military and non-military) NASA etc and energy harvesting for electric vehicles is covered by IDTechEx, Levant, Eindhoven University of Technology, Netherlands, ETH Zurich in Switzerland, IDTechEx UK and many others
Learn more at the next leading event on the topic: Printed Electronics Europe 2020