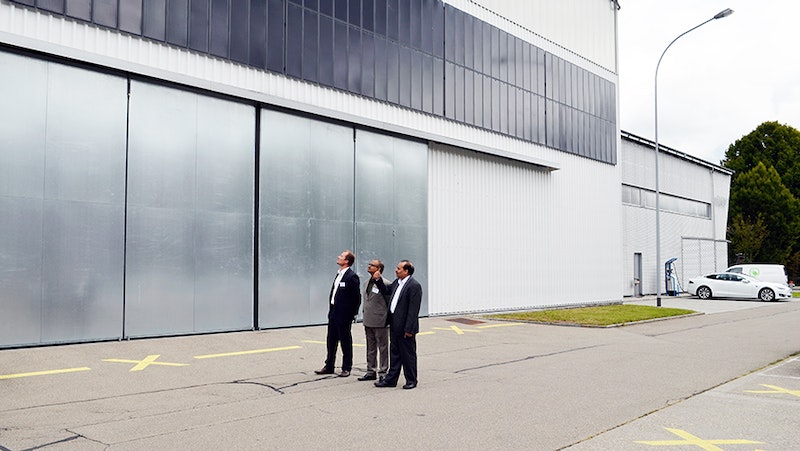 Swiss start-up Flisom is ready for the global market: the company, a spin-off from ETH Zürich and Empa, has developed a unique roll-to-roll process for the cost-effective production of flexible and highly efficient thin-film solar modules. The first pilot plant on the Empa campus in Dübendorf was officially inaugurated and shown to potential customers and partners of the company on 19 September 2017. The solar cells produce renewable energy for "move", Empa's mobility demonstrator.
Mobility without fossil fuels - that is the goal of Empa's mobility demonstrator "move". In addition to electro-mobility, interest focuses on the conversion of renewable electricity that cannot be used straightaway into alternative fuels like hydrogen and - at a later stage of maturation - synthetic methane. The starting point is the production of solar power - new among other things by means of a photovoltaic system from Flisom AG with peak output of around 30 kilowatts.
Flisom was founded in 2005 as a spin-off from ETH Zürich and has continued grow to its current size on the Empa Campus in Dübendorf. In recent years, the company has received significant financial support from Tata Industries and a group of Swiss investors. Flisom developed a roll-to-roll production technology for cost-effective high-performance CIGS (copper-indium-gallium-(di-)selenide) thin-film solar modules on flexible plastic foils. This is based on research by Ayodhya N. Tiwari, director of the Empa Laboratory for Thin Films and Photovoltaics and founder of Flisom. Together with his team at Empa, Tiwari has set a series of world records in terms of efficiency during energy conversion - reaching 20.4% in a flexible CIGS solar cell in 2013.
For Empa director Gian-Luca Bona, the opening of the first Flisom plant at the mobility demonstrator "move" was a special day: "Empa research is the centerpiece of Flisom's innovative solar cells. I am therefore delighted that as partners we are able to inaugurate the first pilot plant here."
Flisom intends to focus on markets in Europe and in the USA in the years ahead. "Our modules combine high efficiency with style. Their flexibility and the thin-film technology mean that they can be deployed in situations where photovoltaic systems have so far not been viable - such as cars, lightweight roofs or drones," said Flisom CEO Rahul Budhwar.
Source and top image: Empa