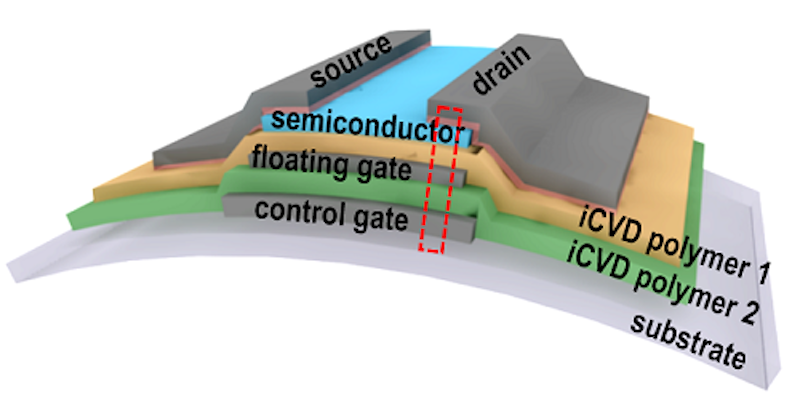 A KAIST team reported ultra-flexible organic flash memory that is bendable down to a radius of 300 μm. The memory exhibits a significantly-long projected retention rate with a programming voltage on par with the present industrial standards.
A joint research team led by Professor Seunghyup Yoo of the School of Electrical Engineering and Professor Sung Gap Im of the Department of Chemical and Biomolecular Engineering said that their memory technology can be applied to non-conventional substrates, such as plastics and papers, to demonstrate its feasibility over a wide range of applications. With Dr. Seungwon Lee and Dr. Hanul Moon playing the role of leading authors, the research was published in Nature Communications.
Flash memory is a non-volatile, transistor-based data-storage device that has become essential in most electronic systems in daily life. With straightforward operation mechanisms and easy integration into NAND or NOR array architecture, flash memory has been established as the most successful and dominant non-volatile memory technology by far.
Despite promising demonstrations in the early stages of organic electronics, the overall progress in this field has been far slower than that of thin-film transistors (TFTs) or other devices based on flexible materials. It has been challenging, in particular, to develop flash memory that simultaneously exhibits a significant level of flexibility and performance. This is mainly due to the scarcity of flexible dielectric layers, which are responsible for the tunneling and blocking of charges.
The solution processing used for the preparation of most of the polymeric dielectric layers also makes it difficult to use them in flash memory due to the complexity involved in the formation of the bilayer dielectric structure, which is the key to flash memory operations.
The research team tried to overcome these hurdles and realize highly flexible flash memory by employing thin polymeric insulators grown with initiated chemical vapor deposition (iCVD), a vapor-phase growth technique for polymers that was previously shown to be promising for the fabrication of flexible TFTs. It was further shown that these iCVD-based polymeric insulators, when coupled with rational device design and material choice, can make a significant contribution to flash memory as well.
Memory using conventional polymer insulating films has often required a voltage as high as 100 V (volt) in order to attain long memory retention. If the device is made to operate at a low voltage, the short retention period of less than a month was problematic.
The KAIST team produced flash memory with programming voltages around 10 V and a projected data retention time of over 10 years, while maintaining its memory performance even at a mechanical strain of 2.8%. This is a significant improvement over the existing inorganic insulation layer-based flash memory that allowed only a 1% strain.
The team demonstrated the virtually foldable memory devices by fabricating the proposed flash memory on a 6-micrometer-thick ultrathin plastic film. In addition, it succeeded in producing them on printing paper, opening a way for disposable smart electronic products such as electronic paper and electronic business card.
Professor Yoo said, "This study well illustrates that even highly flexible flash memory can be made to have a practically viable level of performance, so that it contributes to full-fledged wearable electronic devices and smart electronic paper."
Source and top image: KAIST
Learn more at the next leading event on the topic: Printed Electronics Europe 2020