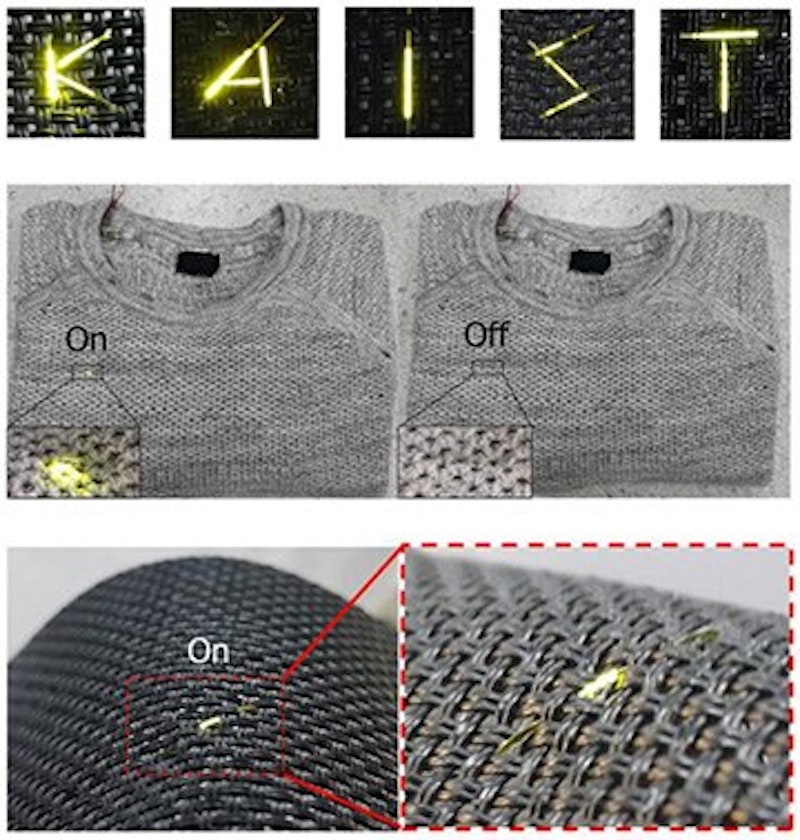 One of the challenges in the push for wearable displays lies in finding reliable, high-performance light emitters compatible with the rough-and-ready world of woven clothing. A team from the Korea Advanced Institute of Science and Technology (KAIST) has come up with one candidate: a high-luminance organic LED (OLED) fiber—manufacturable using a simple, solution-based process—that can be woven into textiles and knitted garments. The KAIST researchers believe that the scheme "can realize low-cost commercially feasible fiber-based wearable displays in the future."
Finding the right fiber
Engineers are pursuing multiple strategies to construct wearable electronics and displays—creating ultrathin or stretchable films with embedded electronic and photonic components, for example, or directly fabricating displays on top of textiles using inorganic and organic LEDs and polymer light-emitting electrochemical cells (PLECs). Perhaps most desirable would be finding LED fibers that could actually be woven into knitted fabrics, allowing display functions to be integrated directly into wearables that retain woven clothing's advantages, such as flexibility, breathability and comfort.
The problem has been that thus far, fiber OLEDs that might be made into light-emitting thread have sported optical performance well below those of OLEDs built on planar substrates, with slower response times, lower luminances and shorter lifetimes. Also, some fiber-shaped emitters have been built on steel wires using high-temperature processes, a manufacturing workflow that may not be a good fit with the variety of sometimes thermally delicate materials that characterize modern clothing.
Dip-coating approach
The KAIST team, seeking to build an OLED fiber with strong enough performance for wearable displays, and with a sustainable, low-temperature manufacturing process, began with a fiber substrate made of polyethylene terephthalate (PET), a common, widely used material for plastic fibers.
The researchers then used a simple dip-coating method to deposit sequential, even layers of OLED components around the PET substrate. These included a cathode layer consisting of the conductive polymer PEDOT:PSS; a layer of polyethylenimine and zinc-oxide nanoparticles for the electron-injection layer; the light-emitting polymer Super Yellow, from Merck, as the emitting layer; a hole-injecting layer of molybdenum oxide; and an anode layer of aluminum. The team also built up the same materials on glass to fashion a planar OLED for experimental comparisons.
When they applied a 7-volt bias to the fiber, the KAIST scientists found that the material exhibited luminance values of more than 10,000 cd/m2 and efficiencies on the order of 11 cd/A—"unprecedented values for fiber-based light-emitting devices," according to the team, "and comparable to conventional glass-based OLEDs." The researchers also showed that the fibers continued to pump out light even when bent, and that the threads could stand up to tensile strains up to 4.3 percent. They were able to create working OLED fibers with diameters ranging from 90 to 300 microns. And they demonstrated that the fibers could be hand-woven into actual knitted garments.
According to Kyung Cheol Choi, the leader of the KAIST lab that performed the work, the fiber OLEDs offer a potential avenue toward overcoming the performance issues that have previously held back some efforts to build wearables based on light-emitting fibers. "This simple, low-cost process," he said in a press release, "opens a way to commercialize fiber-based wearable displays."
Source and top image: The Optical Society
Learn more at the next leading event on the topic: Healthcare Sensor Innovations USA 2020