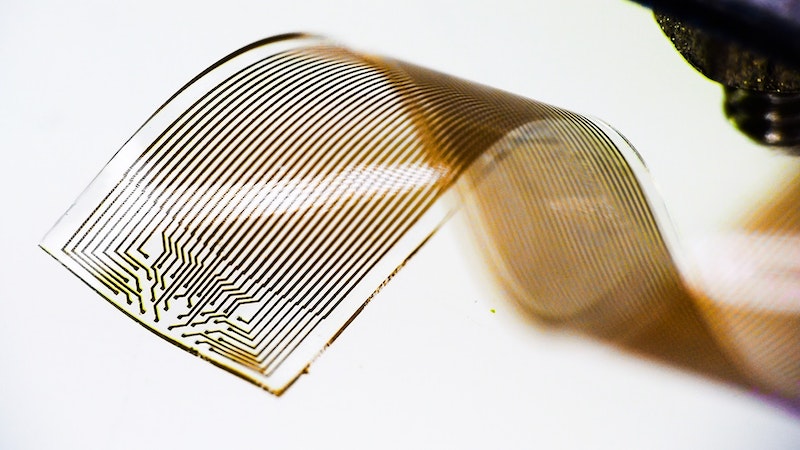 Klas Tybrandt, principal investigator at the Laboratory of Organic Electronics at Linkoping University, has developed new technology for long-term stable neural recording. It is based on a novel elastic material composite, which is biocompatible and retains high electrical conductivity even when stretched to double its original length. For more information see the IDTechEx reports on biosensors and stretchable and conformal electronics.
The result has been achieved in collaboration with colleagues in Zürich and New York. The breakthrough, which is crucial for many applications in biomedical engineering, is described in an article published in the prestigious scientific journal Advanced Materials.
The coupling between electronic components and nerve cells is crucial not only to collect information about cell signalling, but also to diagnose and treat neurological disorders and diseases, such as epilepsy.
It is very challenging to achieve long-term stable connections that do not damage neurons or tissue, since the two systems, the soft and elastic tissue of the body and the hard and rigid electronic components, have completely different mechanical properties.
"As human tissue is elastic and mobile, damage and inflammation arise at the interface with rigid electronic components. It not only causes damage to tissue; it also attenuates neural signals," says Klas Tybrandt, leader of the Soft Electronics group at the Laboratory of Organic Electronics, Linköping University, Campus Norrköping.
New conductive material
Klas Tybrandt has developed a new conductive material that is as soft as human tissue and can be stretched to twice its length. The material consists of gold coated titanium dioxide nanowires, embedded into silicone rubber. The material is biocompatible - which means it can be in contact with the body without adverse effects - and its conductivity remains stable over time.
"The microfabrication of soft electrically conductive composites involves several challenges. We have developed a process to manufacture small electrodes that also preserves the biocompatibility of the materials. The process uses very little material, and this means that we can work with a relatively expensive material such as gold, without the cost becoming prohibitive," says Klas Tybrandt.
The electrodes are 50 µm in size and are located at a distance of 200 µm from each other. The fabrication procedure allows 32 electrodes to be placed onto a very small surface. The final probe, shown in the photograph, has a width of 3.2 mm and a thickness of 80 µm.
The soft microelectrodes have been developed at Linköping University and ETH Zürich, and researchers at New York University and Columbia University have subsequently implanted them in the brain of rats. The researchers were able to collect high-quality neural signals from the freely moving rats for 3 months. The experiments have been subject to ethical review, and have followed the strict regulations that govern animal experiments.
Important future applications
"When the neurons in the brain transmit signals, a voltage is formed that the electrodes detect and transmit onwards through a tiny amplifier. We can also see which electrodes the signals came from, which means that we can estimate the location in the brain where the signals originated. This type of spatiotemporal information is important for future applications. We hope to be able to see, for example, where the signal that causes an epileptic seizure starts, a prerequisite for treating it. Another area of application is brain-machine interfaces, by which future technology and prostheses can be controlled with the aid of neural signals. There are also many interesting applications involving the peripheral nervous system in the body and the way it regulates various organs," says Klas Tybrandt.
Source and top image: Linkoping University
Learn more at the next leading event on the topic: Healthcare Sensor Innovations USA 2020