Who does not remember the futuristic cockpits in the "Thunderbirds Are Go" movie, featuring purportedly 21st-century Human-Machine Interface (HMI) technologies with electromechanical buttons and switches? As the International Rescue pilots themselves, they were extremely trustworthy, but on the flipside these solutions were bulky and expensive, also because of the wiring that was needed for the panel-mounted buttons. With the advent of microprocessor-based systems in the '80's of last century, Membrane Keyboards (or MKB) rapidly started to replace clusters of individual buttons, as all needed controls could be integrated into one thin polymer film panel with integrated wiring made with printed polymer thick-film (PTF) silver inks. In addition, these keyboards offered more decorative possibilities, included backlighting and were dust- and waterproof. Thanks to these advantages, and the massive growth in industrial controls and household appliances, MKBs became one of the biggest early success stories for Printed Electronics.
In more recent years, capacitive touch (or cap-touch) technology started to displace the also once futuristic but now outdated look-and-feel of MKB technology. Polymer films and printed silver circuitry have remained, but keyboard makers needed solutions to create transparent conductive areas for the backlit touch areas. Initially, they turned to ITO films that were processed to remove ITO where it was not needed. But ITO film is expensive and processing is cumbersome for typical MKB printers.
So the advent of "printable ITO" paste under the form of PEDOT:PSS inks like Agfa's Orgacon EL-P series was warmly welcomed by successful MKB makers who now could switch from traditional MKB to more advanced cap-touch panels. In this way, PEDOT:PSS inks have become the industry standard solution for making transparent cap-touch sensor film, in markets as diverse as automotive, white goods and kitchen appliances, and medical instruments.
However, another challenge remained: the very thin PEDOT:PSS layers -with a Dry Film Thickness (DFT) of less than 1µm - have to be combined with the now quite old Polymer Thick Film silver inks from the Thunderbirds era. These inks consist of polymeric binders with metal silver flakes dispersed into them, and after printing and drying, have notoriously low silver efficiencies in the range of only 15% of equivalent bulk silver conductivity (meaning, up to 85% of the silver used is not contributing to the conductivity). Due to their low performance, the inks necessitate the use of screen printing with rather coarse polyester screens in order to reach a minimum DFT of 8-15 µm, and in turn this is limiting the printing resolution and hindering further miniaturization of printed circuitry.
But, with the recent introduction of nanosilver ink, such as Agfa's Orgacon SI-P ink series, also this is now changing: due to the much higher silver efficiency (bulk conductivities of 40% and higher) and the use of nano-sized silver particles, thinner deposits (also in the order of 1 µm DFT) and associated finer lines are becoming mainstream for printed silver circuitry. The thinner deposits also more than compensate for the higher cost of the nanosilver ink, when looking at the cost per printed part.
And beyond this point, a new and possibly game-changing application of nanosilver inks lays in exploiting their fine-line printing capability. Indeed, it is possible to print the transparent conductive areas for backlit cap-touch areas with nanosilver ink.
In the past, Agfa already experimented with screen-printed honey-comb grids as alternative for ITO film, with grid lines only 30µm wide, using advanced metal screen meshes. However, in later application research it was found that patterns of 50µm lines with 200µm gaps in between them, result in transparent conductive areas that look homogeneous to the human eye. This principle is known from applied optical science and for this technology, it has been extensively verified by the optical experts of Agfa Labs. Such printed structures, when covered with any suitable graphics overlay, will result in completely invisible, fully functional backlit cap-touch areas. 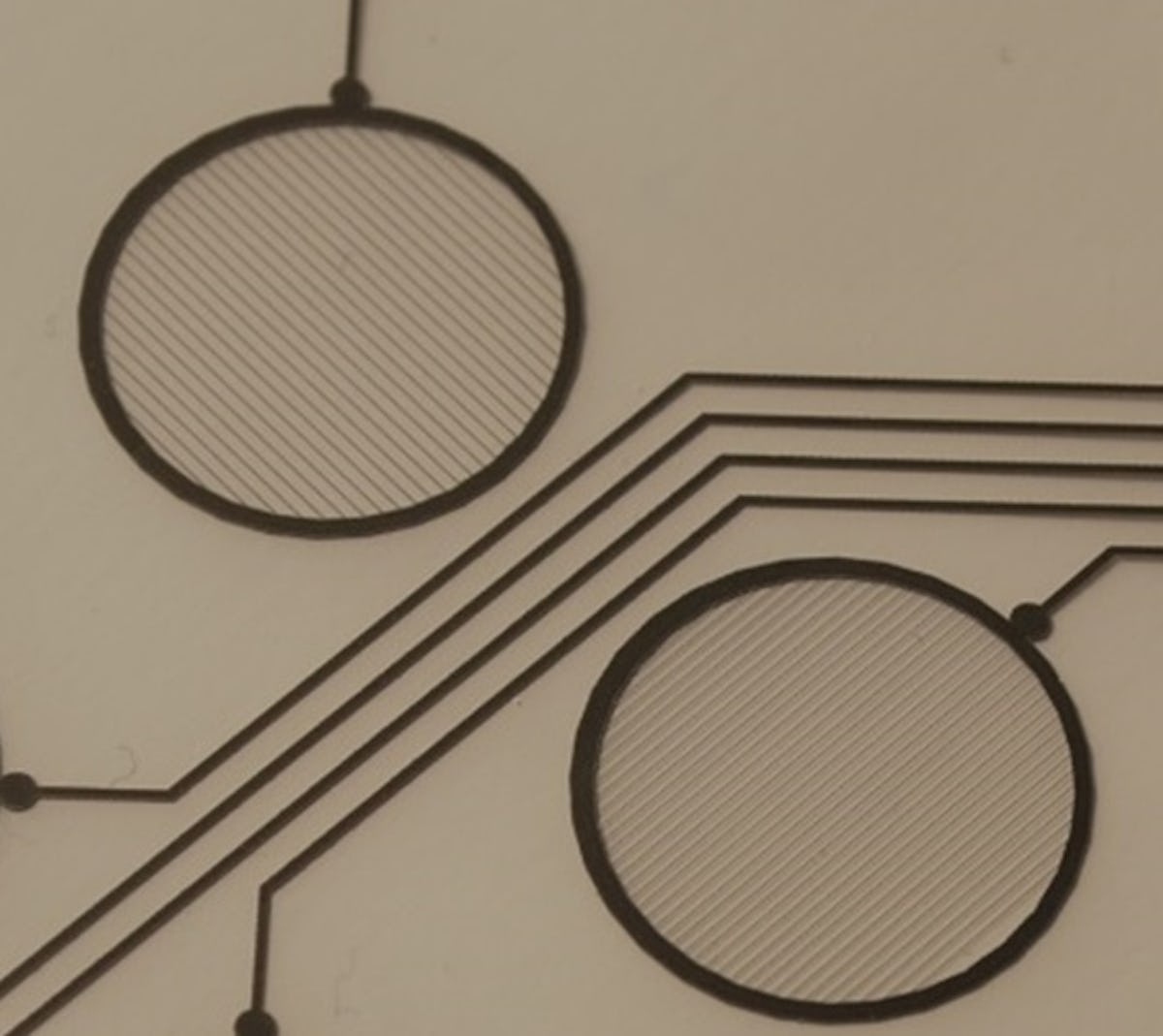 Printed transparent pattern © Agfa-Gevaert N.V.
Bavo Muys, Application Manager PE for Agfa comments: "We were really surprised to find that with VECRY filament screen mesh technology, such as V-Screen 380-023 from NBC Meshtec and well-exposed, high quality screen emulsions, it is possible to print such patterns not only in the lab, but also under industrial conditions. Furthermore, it is a fact that the human eye is even less sensitive to such patterns when they are presented under an angle of 45°, and it is well known to printers that fine line patterns are easier to print when they are under a 45° angle to the squeegee. Another nice-to-know for printers that wish to explore this new approach."
Peter Willaert, Product Manager PE for Agfa adds: "It is clear that being able to print the whole circuit, functional traces, transparent conductive areas and typical EMI shielding areas in one process, with only one type of nanosilver ink, offers a tremendous advantage to makers. Bringing down the number of printing steps from typically 4 to 3 for the whole circuit reduces the cost and increases the yield and the reliability due to less material interfaces. This is especially true for high-volume printers, for whom cost and field returns are the most important drivers and are easily offset against the slightly higher tooling cost upfront"
Meet Agfa-Gevaert N.V. on Booth G18 at Printed Electronics Europe, part of the IDTechEx Show!, in Berlin on 11-12 April.
Source and top image: Agfa-Gevaert N.V.
All trademarks property of their respective owners