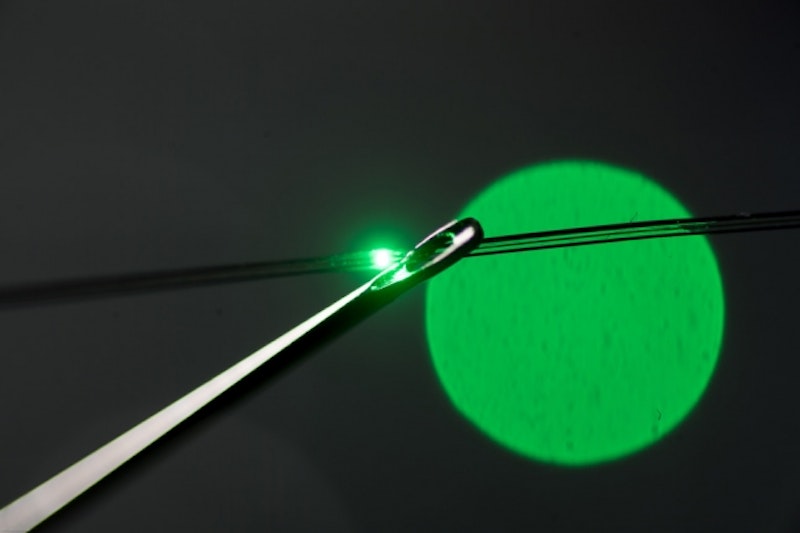 The latest development in textiles and fibers is a kind of soft hardware that you can wear: cloth that has electronic devices built right into it. For more information see the IDTechEx report on E-Textiles 2018-2028.
Researchers at MIT have now embedded high speed optoelectronic semiconductor devices, including light-emitting diodes (LEDs) and diode photodetectors, within fibers that were then woven at Inman Mills, in South Carolina, into soft, washable fabrics and made into communication systems. This marks the achievement of a long-sought goal of creating "smart" fabrics by incorporating semiconductor devices — the key ingredient of modern electronics — which until now was the missing piece for making fabrics with sophisticated functionality.
This discovery, the researchers say, could unleash a new "Moore's Law" for fibers — in other words, a rapid progression in which the capabilities of fibers would grow rapidly and exponentially over time, just as the capabilities of microchips have grown over decades.
The findings are described this week in the journal Nature in a paper by former MIT graduate student Michael Rein; his research advisor Yoel Fink, MIT professor of materials science and electrical engineering and CEO of AFFOA (Advanced Functional Fabrics of America); along with a team from MIT, AFFOA, Inman Mills, EPFL in Lausanne, Switzerland, and Lincoln Laboratory.
Optical fibers have been traditionally produced by making a cylindrical object called a "preform," which is essentially a scaled-up model of the fiber, then heating it. Softened material is then drawn or pulled downward under tension and the resulting fiber is collected on a spool.
The key breakthrough for producing these new fibers was to add to the preform light-emitting semiconductor diodes the size of a grain of sand, and a pair of copper wires a fraction of a hair's width. When heated in a furnace during the fiber-drawing process, the polymer preform partially liquified, forming a long fiber with the diodes lined up along its center and connected by the copper wires.
In this case, the solid components were two types of electrical diodes made using standard microchip technology: light-emitting diodes (LEDs) and photosensing diodes. "Both the devices and the wires maintain their dimensions while everything shrinks around them" in the drawing process, Rein says. The resulting fibers were then woven into fabrics, which were laundered 10 times to demonstrate their practicality as possible material for clothing.
"This approach adds a new insight into the process of making fibers," says Rein, who was the paper's lead author and developed the concept that led to the new process. "Instead of drawing the material all together in a liquid state, we mixed in devices in particulate form, together with thin metal wires."
One of the advantages of incorporating function into the fiber material itself is that the resulting fiber is inherently waterproof. To demonstrate this, the team placed some of the photodetecting fibers inside a fish tank. A lamp outside the aquarium transmitted music (appropriately, Handel's "Water Music") through the water to the fibers in the form of rapid optical signals. The fibers in the tank converted the light pulses — so rapid that the light appears steady to the naked eye — to electrical signals, which were then converted into music. The fibers survived in the water for weeks.
Though the principle sounds simple, making it work consistently, and making sure that the fibers could be manufactured reliably and in quantity, has been a long and difficult process. Staff at the Advanced Functional Fabric of America Institute, led by Jason Cox and Chia-Chun Chung, developed the pathways to increasing yield, throughput, and overall reliability, making these fibers ready for transitioning to industry. At the same time, Marty Ellis from Inman Mills developed techniques for weaving these fibers into fabrics using a conventional industrial manufacturing-scale loom.
"This paper describes a scalable path for incorporating semiconductor devices into fibers. We are anticipating the emergence of a 'Moore's law' analog in fibers in the years ahead," Fink says. "It is already allowing us to expand the fundamental capabilities of fabrics to encompass communications, lighting, physiological monitoring, and more. In the years ahead fabrics will deliver value-added services and will no longer just be selected for aesthetics and comfort."
He says that the first commercial products incorporating this technology will be reaching the marketplace as early as next year — an extraordinarily short progression from laboratory research to commercialization. Such rapid lab-to-market development was a key part of the reason for creating an academic-industry-government collaborative such as AFFOA in the first place, he says. These initial applications will be specialized products involving communications and safety. "It's going to be the first fabric communication system. We are right now in the process of transitioning the technology to domestic manufacturers and industry at an unprecendented speed and scale," he says.
In addition to commercial applications, Fink says the U.S. Department of Defense — one of AFFOA's major supporters — "is exploring applications of these ideas to our women and men in uniform."
Beyond communications, the fibers could potentially have significant applications in the biomedical field, the researchers say. For example, devices using such fibers might be used to make a wristband that could measure pulse or blood oxygen levels, or be woven into a bandage to continuously monitor the healing process.
The research was supported in part by the MIT Materials Research Science and Engineering Center (MRSEC) through the MRSEC Program of the National Science Foundation, by the U.S. Army Research Laboratory and the U.S. Army Research Office through the Institute for Soldier Nanotechnologies. This work was also supported by the Assistant Secretary of Defense for Research and Engineering.
Source and top image: MIT
Learn more at the next leading event on the topic: Printed Electronics Europe 2020