A new generation of lighting products could soon be illuminating our homes and businesses after a high-profile group of researchers demonstrated that the cost of producing flexible OLED panels can be reduced by over 90%. For more information see the IDTechEx report on OLED Lighting Opportunities 2017-2027.
The three-year European Flexolighting project - led by Brunel University London and a consortium of partners including Marks & Spencer, Tata Steel and AIXTRON SE - revealed that by introducing novel manufacturing techniques and rethinking the complete supply chain, it's possible to reduce the cost of producing thin, high-efficiency OLED lighting panels to a similar level to that of traditional LEDs.
OLEDs - organic light-emitting diodes - have long been touted as the future of lighting and display panels but until now the cost of production has scuppered mass adoption.
It's hoped that the new research, which will be made available to European manufacturers, will help herald a new era of low-cost, high-efficiency lighting products. 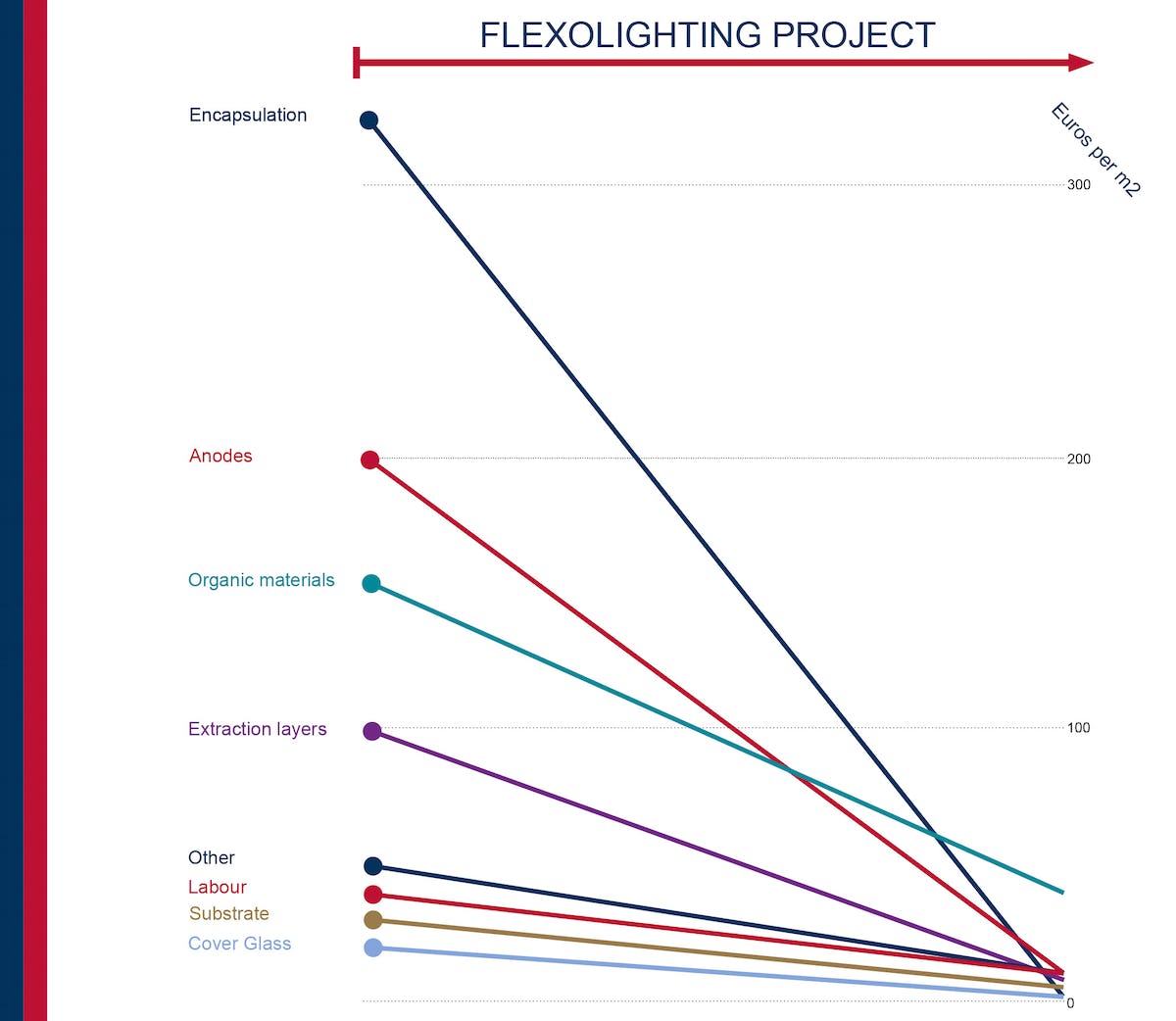 If all of the processes, materials and components developed during the Flexolighting project are adopted, a cost saving of over 90% is possible.
"Flexolighting essentially deconstructed the OLED panel and re-imagined it as a series of individual elements that together can be repackaged to realise cost-effective, environmentally-less harmful, and beautifully designed lighting solutions," said Professor Poopathy Kathirgamanathan, Chair Professor in Electronic Materials Engineering at Brunel.
Backed by €4.4m from the European Union's Horizon 2020 research and innovation programme, the group were set the ambitious challenge of reducing the cost of producing OLEDs down to around €1 per 100 lumens - from their current position of around €15 per 100 lumens.
By introducing a number of innovative new techniques, such as 'printing' some of the OLED's layers onto flexible steel rather than the more traditional glass, and using a newly developed 'light extraction film' to double the OLED's illumination, the group achieved a potential cost of €1.20 per 100 lumens - or a 92% reduction in cost.

The Flexolighting project developed a new 'light extraction film' which doubles the illumintaiton output of the OLED's
"We've pushed the state-of-the-art to achieve world firsts in processing technologies, used novel materials such as planarised flexible steel and developed transparent top contacts with metallic films," said Prof Kathirgamanathan. "We also proved thin film encapsulation, and showed how effective light extraction can be. The result is a highly innovative concept. By breaking away from existing limitations, we now no longer need to rely on glass substrates and glass encapsulation - we can turn the OLED upside down, maintain conductivity with alternative anodes and cathodes, process the device in a new way and protect it with a thin film. The end product is one that can be formed into an infinite number of design choices, and it was all made possible with European expertise and know-how."
Whilst no products have yet been released using the group's new techniques, it's expected that they will find application in a number of industries, from domestic and commercial lighting, to cars and wearable technology.
"Flexolighting is a very compelling proposition," said Prof Kathirgamanathan, "and one that, thanks to the commercial success of OLED displays in the consumer electronics sector, is very easy to envisage becoming commercially fruitful in its own right."
Source and images: Brunel University