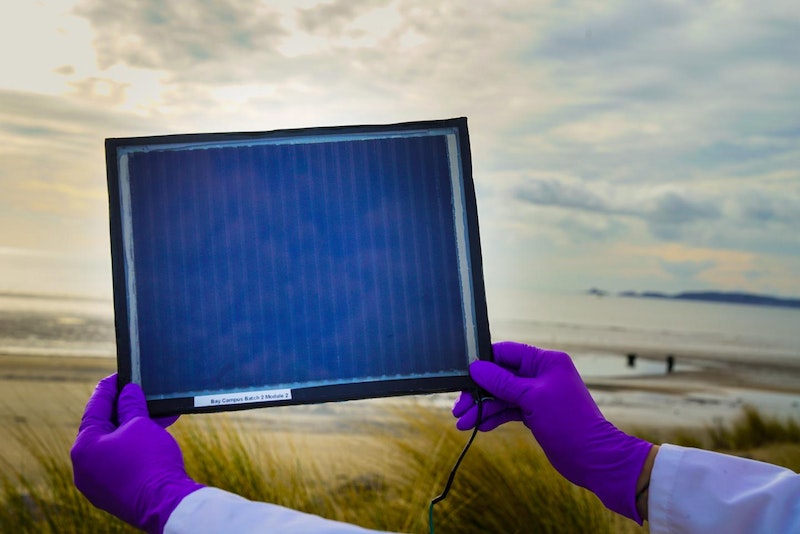 A perovskite solar module the size of an A4 sheet of paper, which is nearly six times bigger than 10x10 cm2 modules of that type reported before, has been developed by Swansea University researchers, by using simple and low-cost printing techniques. The breakthrough shows that the technology works at a larger scale, not just in the lab, which is crucial for encouraging industry to take it up. For more information see the IDTechEx report on Perovskite Photovoltaics 2018-2028.
Each of the many individual cells forming the module is made of perovskite, a material of increasing interest to solar researchers as it can be made more easily and cheaply than silicon, the most commonly-used material for solar cells. Perovskite solar cells have also proved to be highly efficient, with scores for power conversion efficiency (PCE) - the amount of light striking a cell that it converts into electricity - as high as 22% on small lab samples.
The team work for the SPECIFIC Innovation and Knowledge Centre led by Swansea University. They used an existing type of cell, a Carbon Perovskite Solar Cell (C-PSC), made of different layers - titania, zirconia and carbon on top - which are all printable.
Though their efficiency is lower than other perovskite cell types, C-PSCs do not degrade as quickly, having already proved over 1 year's stable operation under illumination. The Swansea team's breakthrough comes from the optimisation of the printing process on glass substrates as large as an A4 sheet of paper. They ensured the patterned layers were perfectly aligned through a method called registration, well-known in the printing industry. The entire fabrication process was carried out in air, at ambient conditions, without requiring the costly high-vacuum processes which are needed for silicon manufacture.
The Swansea team achieved good performance for their modules:
The high efficiency ratings under indoor lighting conditions demonstrate that this technology has potential not only for energy generation outdoors but also for powering small electronic devices - such as smartphones and sensors - indoors.
Dr Francesca De Rossi, technology transfer fellow at Swansea University's SPECIFIC Innovation and Knowledge Centre, said: "Our work shows that perovskite solar cells can deliver good performance even when produced on a larger scale than reported so far within the scientific community. This is vital in making it economical and appealing for industry to manufacture them. The key to our success was the screen printing process. We optimised this to avoid defects caused by printing such large areas. Accurate registration of layers and patterning the blocking layer helped improve connections between cells, boosting overall performance. There is more work still to do, for example on increasing the active area - the percentage of the substrate surface that is actually used for producing power. We are already working on it. But this is an important breakthrough by our team, which can help pave the way for the next generation of solar cells."
Source and top image: Swansea University
Learn more at the next leading event on the topic: Printed Electronics Europe 2020