Plastic that conducts electricity holds promise for cheaper, thinner, and more flexible electronics. This technology is already available in some gadgets - the new Sony walkman that was introduced earlier this summer and the Microsoft Zune HD music player released last week both incorporate organic light-emitting electronic displays.
Until now, however, circuits built with organic materials have allowed only one type of charge to move through them. New research from the University of Washington makes charges flow both ways. The cover article in an upcoming issue of the journal Advanced Materials describes an approach to organic electronics that allows transport of both positive and negative charges.
"The organic semiconductors developed over the past 20 years have one important drawback. It's very difficult to get electrons to move through," said lead author Samson Jenekhe, a UW professor of chemical engineering. "By now having polymer semiconductors that can transmit both positive and negative charges, it broadens the available approaches. This would certainly change the way we do things." 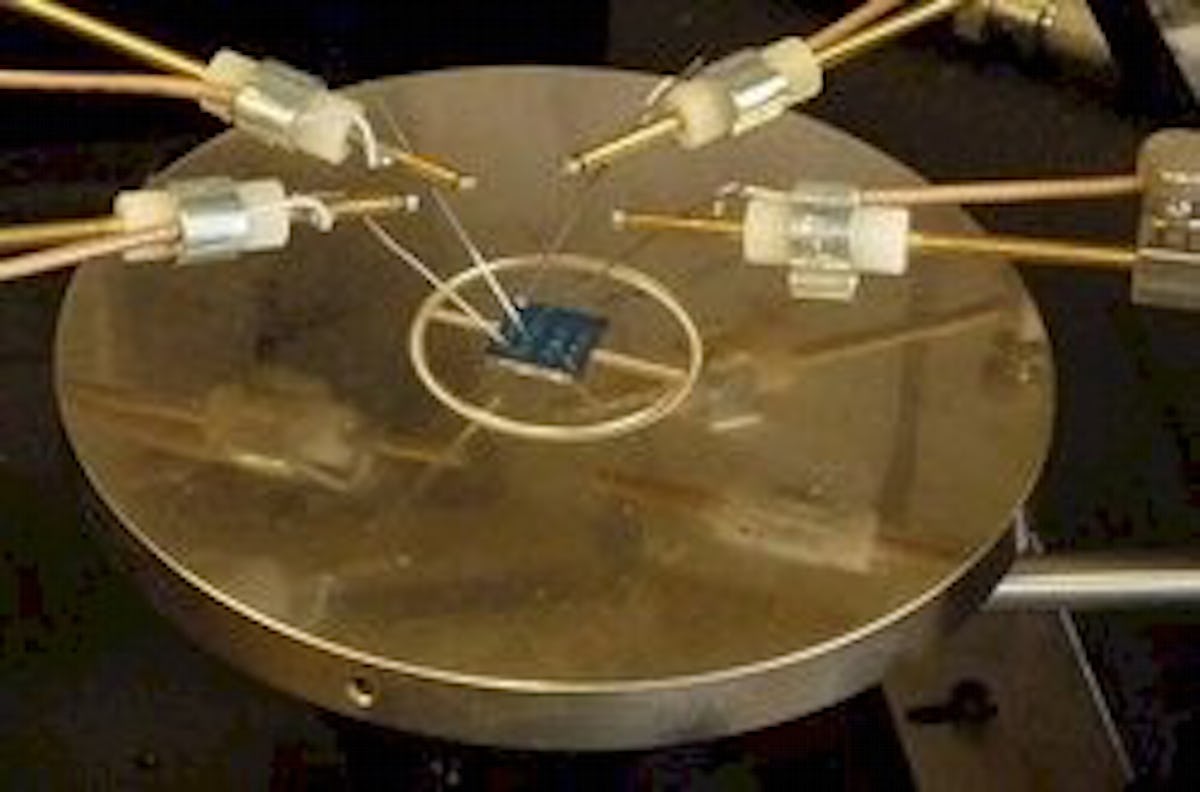 The organic circuit developed at the University of Washington that transmits positive and negative charges. Here it is undergoing a test. Source University of Washington.
Co-authors are Felix Kim, a doctoral student working with Jenekhe, and graduate student Xugang Guo and assistant professor Mark Watson at the University of Kentucky. The research was funded by the National Science Foundation, the Department of Energy, and the Ford Foundation.
Silicon Valley got its name for a reason: Silicon is the "workhorse" of today's electronics industry, Jenekhe said. Silicon is fairly expensive and requires costly manufacturing, however, and because its rigid crystal form does not allow flexible devices.
About 30 years ago, it was discovered that some plastics, or polymers, could conduct electricity. Since then researchers have been working to make them more efficient. Organic, or carbon-based, electronics are now used in such things as laptop computers, car audio systems, and mp3 players.
A major drawback with existing organic semiconductors is most transmit only positive charges (called "holes" because the moving areas of positive charge are actually places where an electron is missing). In the last decade a few organic materials have been developed that can transport only electrons. However, making a working organic circuit has meant carefully layering two complicated patterns on top of one another, one that transports electrons and another one that transports holes.
"Because current organic semiconductors have this limitation, the way they're currently used has to compensate for that, which has led to all kinds of complex processes and complications," Jenekhe said.
For more than a decade, Jenekhe's lab has been a leader in developing organic semiconductors that can transmit electrons. Over the past few years, the group has created polymers with a donor and an acceptor part, and carefully adjusted the strength of each one. In collaboration with Watson's lab, they have now developed an organic molecule that works to transport both positive and negative charges.
"What we have shown in this paper is that you don't have to use two separate organic semiconductors," Jenekhe said. "You can use one material to create electronic circuits."
The material would allow organic transistors and other information-processing devices to be built more simply, in a way that is more similar to how inorganic circuits are now made.
The group used the new material to build a transistor designed in the same way as a silicon model and the results show that both electrons and holes move through the device quickly.
The results represent the best performance ever seen in a single-component organic polymer semiconductor, Jenekhe said. Electrons moved five to eight times faster through the UW device than in any other such polymer transistor. A circuit, which consists of two or more integrated devices, generated a voltage gain two to five times greater than previously seen in a polymer circuit.
"We expect people to use this approach," Jenekhe said. "We've opened the way for people to know how to do it."
Top image: An organic polymer circuit that transports both positive and negative charges. The circuit was created by solution casting of a newly developed material. Courtesty University of Washington.
To learn more attend Printed Electronics Asia 2009 or Printed Electronics USA 2009.
Reference: University of Washington