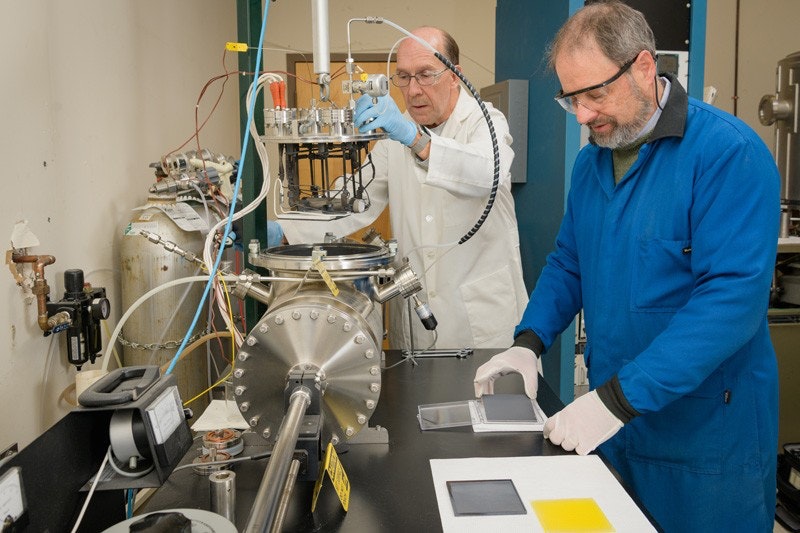 Stop for a moment and imagine an efficient highway system. No need to jockey for position, no choke-point merging from three lanes into one, no long idles at ill-timed traffic lights, no rolling roadblocks as the motorist ahead of you prepares for a turn that is still five miles away. Regardless of the number of cars, you would know what smooth sailing looks and feels like. For more information see the IDTechEx report on Energy Harvesting Microwatt to Megawatt 2019-2029.
That's the life solid-state researchers want for electrons as they work to capture the sun's extraordinary energy and convert it into electricity.
Scientist Brian McCandless and many other researchers have been chipping away at the challenge of improving the electron traffic in solar cells for decades. McCandless, of the University of Delaware's Institute of Energy Conversion, has focused especially on the conversion efficiency and cost of thin-film photovoltaics, which offer competitive pricing for solar power generation.
Now, McCandless and his collaborators at the National Renewable Energy Lab in Golden, Colorado, have made significant inroads, with McCandless' UD-patented invention that has a Star Trek-like name - a Vapor Transport Deposition System - and NREL's larger-scale verification of its abilities.
With it, they have demonstrated a new way to adjust the properties of thin films that offers increased efficiency and reduced cost - opening the door to even greater advances. Their findings, made with support from the U.S. Department of Energy, were published in Nature's "Scientific Reports."
Thin-film technology represents a small but growing share of the solar market compared to the much more common silicon wafers, but thin films have many advantages over those wafers. Thin films allow for rapid production of more flexible, lightweight solar panels, expanding the options for design and application.
The high-water mark for thin-film efficiency was set in 2016 at 22.1 percent, which means about that much of the captured solar light is converted directly into electricity.
The most common sun-catching method is those solar panels you see on residential rooftops or angled toward the sky in other settings. Specially engineered cells on those panels - made typically of silicon - capture the energy-packed photons showered lavishly upon us in every stream of sunlight. On a sunny day, there are about 1,000 watts of sunlight hitting every square yard of the Earth's surface.
When these solar photons strike photovoltaic materials, they are converted into electrons and holes. When steered the right way inside the material, they can produce electric voltage and a flow of electricity, resulting in power.
Thin film materials are composed of millions of crystals per square inch, layered atop foundational materials called substrates using both heat and pressure and "grown" - or built up - in device stacks called "solar cells." The trick is to adjust the property of each crystalline grain as this growth occurs.
McCandless' patented new tool, the vapor transport deposition system, is used to make those fine adjustments during film growth, incorporating small quantities of additional elements into the thin-film's crystals at temperatures which allow control of the properties in ways that improve the solar cell's performance.
When the incorporated atoms are active, they produce what is known as "doping," which raises the conductivity and increases the voltage that can be produced by the cell. Combined with other processes after growth, efficient flow of electrons to the electrode is expedited - the way you might improve highway traffic flow by opening up a new lane or adding new access points. Finding the right blend of doping and those other processes - one that doesn't create other problems or affect the endurance of those electrons - is critical.
McCandless' research used one of the most prominent thin-film materials, cadmium telluride (CdTe), and tested three doping scenarios and treatments, using antimony (Sb), arsenic (As) and phosphorus (P). Each led to unique sets of properties and all resulted in significantly higher doping levels, with arsenic and antimony yielding the highest.
"Cadmium telluride absorbs sunlight really, really well," McCandless said. "A lot of properties make it great. But we were only getting about 0.8 volts out of any cell. With its high absorption properties and optimal band gap, we should be able to generate 1.1 volts."
There are thermodynamic limitations when growing these films, but that problem was addressed in the new process, too.
"If you take a cadmium telluride lattice, take one of the telluriums out and shove one of these elements in, it now is missing an electron," McCandless said. "Because of thermodynamics, it doesn't want to stay in that condition. But if you freeze the lattice by growing it fast enough and cooling it fast enough, you obtain that extra missing electron - the hole we're after - and you have higher conductivity."
The electron's highway system has been upgraded, in other words.
Until now, high doping of cadmium telluride thin films had eluded scientists and engineers. Now voltages over 1 volt and efficiencies of 25 percent become possible. The next part of the puzzle is increasing the electron flow by tailoring other processes.
"We demonstrated that we can do the doping controllably," he said. "Now we want to decrease the incorporated amount needed by using less of these elements and still get the same benefit."
McCandless and IEC have worked out the chemistry and NREL has worked out how to integrate the films into a complete solar cell with higher performance.
"They validated the measurements we made on films and replicated the technique in their laboratory," he said.
The unique tool - the vapor transport deposition system - was developed with help from IEC's Wayne Buchanan, Shannon Fields, Greg Hanket, Erten Eser and Bob Birkmire.
Increased efficiency and voltage will have wonderful cascading effects, including reduced reliance on fossil fuels and expanded access to renewable energy.
"It shows people skilled in the art that there's a path forward for the voltage," McCandless said.
Source and top image: University of Delaware