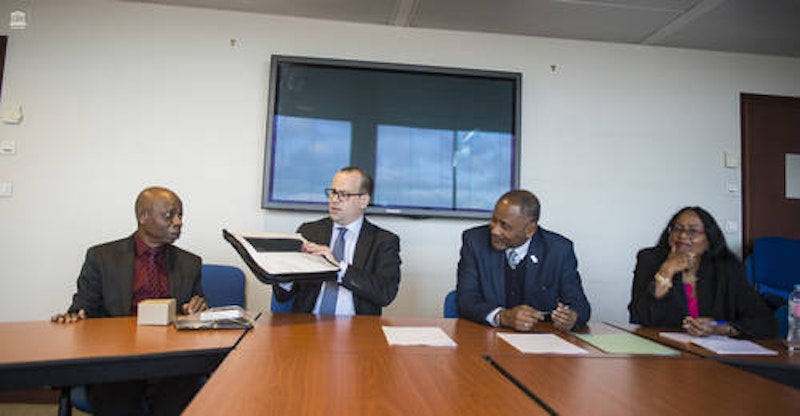 The Assistant Director-General for Priority Africa and External Relations, Firmin Edouard Matoko, signed on behalf of UNESCO Director-General, Audrey Azoulay, a Partnership agreement with ARMOR, whose President, Hubert de Boisredon, was represented by Olivier Portier, Business Development Manager.
This new cooperation between UNESCO and ARMOR in the field of new technologies, in particular solar kits, comprising ASCA organic photovoltaïc films and portable and rechargeable lamps, constitutes an innovation, which has been experimented on a pilot basis, at the beginning of this year in a public primary school in Akplolo, Togo. This pilot will be part of the broader project, which will be implemented in the framework of this partnership agreement.
The first results obtained in the pilot project, which included the provision of a few solar kits and portable and rechargeable lamps to a few primary school children of Akplolo, show already some perceptible improvements as concerns pupils' retention and their interest to work longer hours after school with the portable lamps. This augurs well for the success and sustainability of this new project, including its ownership by the population of Akplolo. This ownership has been driven, from the very beginning, through discussions with local authorities, initiated by Alphonse Tay, ex-staff member of UNESCO, who is passionate about education and this project. These discussions involved the GRAD (Group of reflection and action for the development of the village of Akplolo), which will be responsible for the close monitoring of this project with UNESCO.
Through this project, working closely with the Partner ARMOR, UNESCO hopes to generate a good practice, which can be scaled up in Togo, and replicated in other African countries.
Source: UNESCO