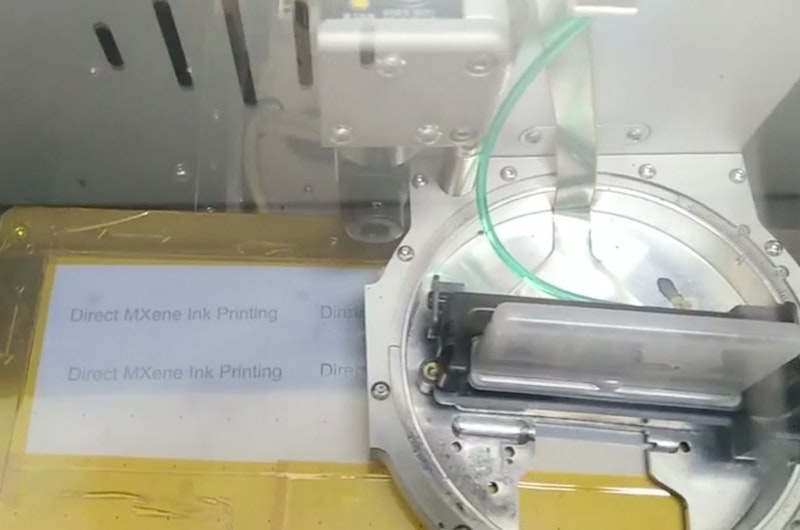 Researchers from Drexel University and Trinity College in Ireland, have created ink for an inkjet printer from a highly conductive type of two-dimensional material called MXene. Recent findings, published in Nature Communications, suggest that the ink can be used to print flexible energy storage components, such as supercapacitors, in any size or shape. For more information see the IDTechEx report on Flexible, Printed and Thin Film Batteries 2019-2029.
Conductive inks have been around for nearly a decade and they represent a multi-hundred million-dollar market that is expected to grow rapidly into the next decade. It's already being used to make the radiofrequency identification tags used in highway toll transponders, circuit boards in portable electronics and it lines car windows as embedded radio antennas and to aid defrosting. But for the technology to see broader use, conductive inks need to become more conductive and more easily applied to a range of surfaces.
Yury Gogotsi, PhD, Distinguished University and Bach professor in Drexel's College of Engineering, Department of Materials Science and Engineering, who studies the applications of new materials in technology, suggests that the ink created in Drexel's Nanomaterials Institute is a significant advancement on both of these fronts.
"So far only limited success has been achieved with conductive inks in both fine-resolution printing and high charge storage devices," Gogotsi said. "But our findings show that all-MXene printed micro-supercapacitors, made with an advanced inkjet printer, are an order of magnitude greater than existing energy storage devices made from other conductive inks."
While researchers are steadily figuring out ways to make inks from new, more conductive materials, like nanoparticle silver, graphene and gallium, the challenge remains incorporating them seamlessly into manufacturing processes. Most of these inks can't be used in a one-step process, according to Babak Anasori, PhD, a research assistant professor in Drexel's department of Materials Science and Engineering and co-author of the MXene ink research.
"For most other nano inks, an additive is required to hold the particles together and allow for high-quality printing. Because of this, after printing, an additional step is required — usually a thermal or chemical treatment — to remove that additive," Anasori said. "For MXene printing, we only use MXene in water or MXene in an organic solution to make the ink. This means it can dry without any additional steps."
MXenes are a type of carbon-based, two-dimensional layered materials, created at Drexel in 2011, that have the unique ability to mix with liquids, like water and other organic solvents, while retaining their conductive properties. Because of this, Drexel researchers have produced and tested it in a variety of forms, from conductive clay to a coating for electromagnetic interference shielding to a near-invisible wireless antenna.
Adjusting the concentration to create ink for use in a commercial printer was a matter of time and iteration. The solvent and MXene concentration in the ink can be adjusted to suit different kinds of printers.
"If we really want to take advantage of any technology at a large scale and have it ready for public use, it has to become very simple and done in one step," Anasori said. "An inkjet printer can be found in just about every house, so we knew if we could make the proper ink, it would be feasible that anyone could make future electronics and devices."
As part of the study, the Drexel team, working with researchers at Trinity College, who are experts in printing, put the MXene ink to the test in a series of printouts, including a simple circuit, a mirco-supercapacitor and some text, on substrates ranging from paper to plastic to glass. In doing so, they found that they could print lines of consistent thickness and that the ink's ability to pass an electric current varied with its thickness — both important factors in manufacturing electronics components. And the printouts maintained their superior electric conductivity, which is the highest among all carbon-based conductive inks, including carbon nanotubes and graphene.
This all amounts to a very versatile product for making the tiny components that perform important, but often overlooked functions in our electronics devices — jobs like keeping the power on when the battery dies, preventing damaging electrical surges, or speeding the charging process. Providing a higher-performing material and a new way to build things with it could lead not only to improvements to our current devices, but also the creation of entirely new technologies.
"Compared to conventional manufacturing protocols, direct ink printing techniques, such as inkjet printing and extrusion printing, allow digital and additive patterning, customization, reduction in material waste, scalability and rapid production," Anasori said. "Now that we have produced a MXene ink that can be applied via this technique, we're looking at a world of new opportunities to use it."
Source and top image: Drexel University