Autonomous Vehicles for the Australian Army 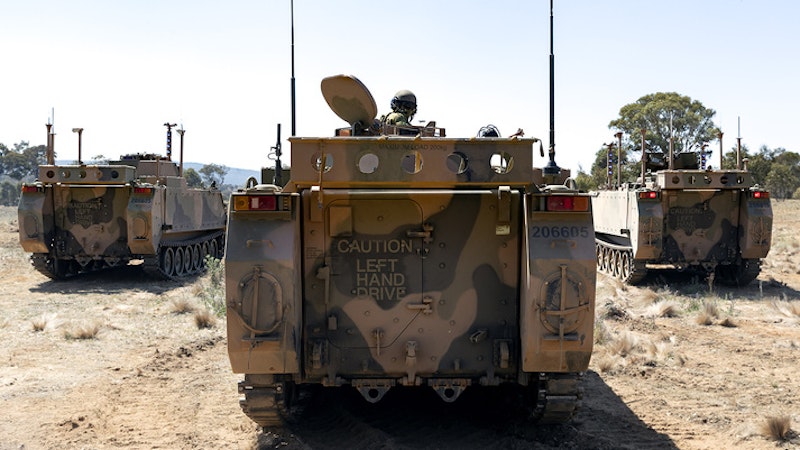 Two fully autonomous armoured vehicles were the centrepiece of a landmark demonstration for the Australian Army this week, providing crucial insights into the capabilities of integrated autonomous technologies on future battlefields. The 'battlefield simulation' demonstration was held at the Majura Training Site where the Chief of Army observed the two M113 vehicles in operation. For more information see the IDTechEx report on Electric Vehicles and Autonomous Vehicles in Mining 2018-2028.
In a six month project, engineers and technicians installed hardware and software in the vehicles enabling them to operate autonomously. The innovative autonomous technologies being explored could remove soldiers from future battlefields and enable a range of other applications including intelligence gathering and logistics support. The on-board systems have been designed to comply with the rules of engagement, which always require humans in the decision-making loop.
BAE Systems Australia CEO Gabby Costigan said "This project highlights our commitment to leading the development of new technologies and collaborating across industry and academia to advance autonomous capabilities. BAE Systems Australia's autonomous systems capability leverages more than three decades of collaboration between BAE Systems Australia and the Commonwealth Government through Programs such as Nulka and Evolved Sea Sparrow Missile (ESSM). Autonomous technologies will support soldier responsiveness in an accelerating warfare environment - increasing their ability to outpace, out-manoeuvre and out-think conventional and unconventional threats."
The BAE Systems autonomous technologies used for this project have already supported Australian and UK Autonomy programs such as Taranis, Mantis, Kingfisher UAS demonstrators as well as the multi-all terrain vehicle (MATV) and Digger unmanned ground vehicle (UGV) demonstrators.
With the technologies now integrated into the M113 prototype, the vehicles will now be used by the Army to experiment with to better understand the opportunities to employ autonomy on the battlefield as part of its recently released Robotics and Autonomous Systems Strategy.
The vehicles will also be used as test vehicles for technology developed by the Commonwealth's recently announced Trusted Autonomous Systems Defence Cooperative Research Centre (TAS-DCRC). The TAS-DCRC was announced by the Australian Government in 2017 under the Next Generation Technologies Fund to deliver game-changing autonomous systems that ensure trusted, reliable and effective cooperation between people and machines during military operations.
BAE Systems is a founding member of the CRC and the industry lead for Land Autonomy, working closely with Army and with Defence Science and Technology Group to ensure soldiers have what they need to be future ready.
Source and top image: BAE Systems

Training on Emerging Technologies at IDTechEx Masterclasses
Become the Next IDTechEx Launchpad Start-up Success Story!
Boost to the Electric Vehicle Motor Business
Materials Informatics: The Time For Adoption is Now