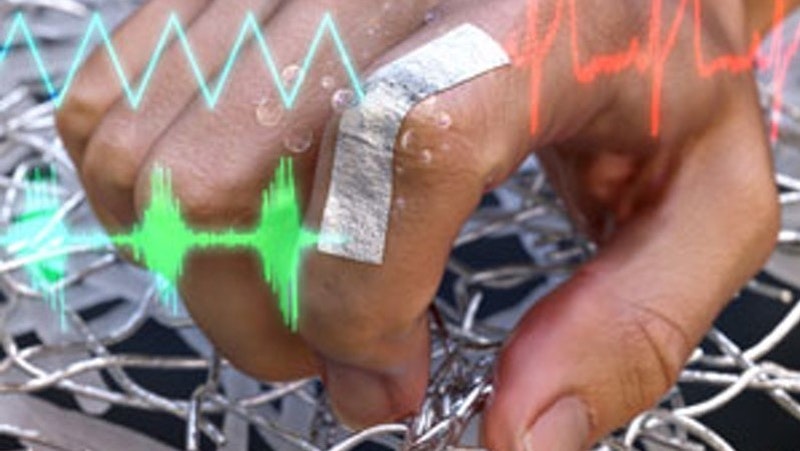 RIKEN engineers have made a breathable material that is both highly stretchable and has good electrical conductivity, making it promising for on-skin electronics for people and wiring for robots. For more information on this topic see the IDTechEx report on Printed, Organic and Flexible Electronics 2020-2030: Forecasts, Technologies, Markets.
To be suitable for use as wearable electronics, a material needs to be both stretchable and conductive. It should also be breathable and durable. Finding a material that satisfies all four criteria is not easy. One promising strategy is to combine elastic polymer nanofibers with a network of conductive metal nanowires, but it is challenging to get the two components to bond tightly to each other.
Now, Kenjiro Fukuda and Zhi Jiang of the RIKEN Thin-Film Device Laboratory and their co-workers have succeeded in producing a stretchable and conductive material by combining polyurethane nanofibers with silver nanowires.
Importantly, the two components bond strongly to each other. "There's very good adhesion between the silver nanowires and the polyurethane nanofibers," notes Fukuda. "This is why we simultaneously achieved a very good stretchability and conductivity." The team suspects that hydrogen bonds, the same bonds that hold pulp fibers together in a sheet of paper, are responsible for this good adhesion.
The film could find use as electrical wiring that can be used on the skin. Its flexibility allows it to stretch when a person bends their elbow or knee, and it can be stretched to three times its initial length. In the same way, it could also be used for wiring on robots. Another potential use is as a sensor. Because its conductivity changes when it is stretched, it can be used to detect movement. The team demonstrated this by using their film to monitor the angle of a bent wrist and detect a person's pulse. For more information see the IDTechEx report on Electronic Skin Patches 2019-2029.
The film has other advantages besides good stretchability and conductivity. When the researchers tested their film by stretching and releasing it 1,000 times, they observed that its conductivity dropped off only moderately, indicating that it has good durability. Furthermore, it is easy to fabricate. "This film can be obtained by solution processes," says Fukuda. "That's very important for the mass production of the industrial product."
The team intends to improve the stretchability of the material by using longer silver nanowires. They also plan to experiment with other combinations of materials and pursue applications of these breathable conductors in real-time health monitoring systems and soft robotics.
Source and top image: RIKEN