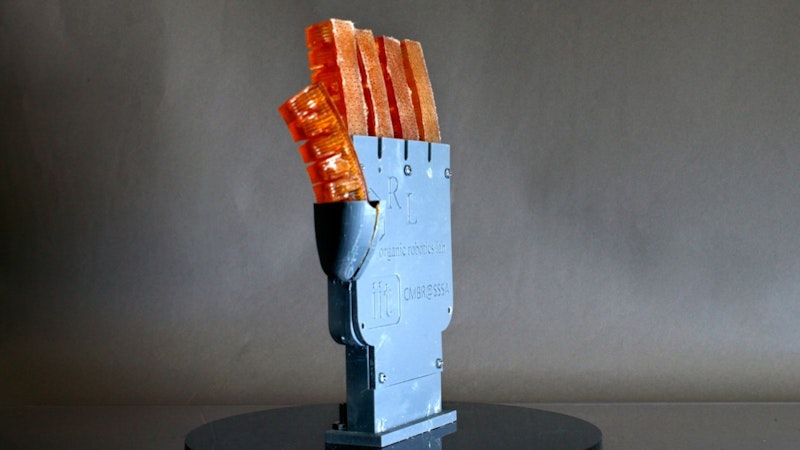 Just when it seemed like robots couldn't get any cooler, Cornell researchers have created a soft robot muscle that can regulate its temperature through sweating. This form of thermal management is a basic building block for enabling untethered, high-powered robots to operate for long periods of time without overheating, according to the Rob Shepherd, associate professor of mechanical and aerospace engineering, who led the project. The team's paper, "Autonomic Perspiration in 3D Printed Hydrogel Actuators," published Jan. 29 in Science Robotics.
One of the hurdles for making enduring, adaptable and agile robots is managing the robots' internal temperature, according to Shepherd, the paper's senior author. If the high-torque density motors and exothermic engines that power a robot overheat, the robot will cease to operate. This is a particular issue for soft robots, which are made of synthetic materials. While more flexible, they hold their heat, unlike metals, which dissipate heat quickly. An internal cooling technology, such as a fan, may not be much help because it would take up space inside the robot and add weight. So Shepherd's team took inspiration from the natural cooling system that exists in mammals: sweating. For more information see the IDTechEx report on Stretchable and Conformal Electronics 2019-2029.
"The ability to perspire is one of the most remarkable features of humans," said co-lead author T.J. Wallin, M.S. '16, Ph.D. '18, a research scientist at Facebook Reality Labs. "Sweating takes advantage of evaporated water loss to rapidly dissipate heat and can cool below the ambient environmental temperature. ... So as is often the case, biology provided an excellent guide for us as engineers."
Shepherd's team partnered with the lab of Emmanuel Giannelis, the Walter R. Read Professor of Engineering, to create the necessary nanopolymer materials for sweating via a 3D-printing technique called multi-material stereolithography, which uses light to cure resin into predesigned shapes.
"Our contribution is the making of mixtures of nanoparticles and polymeric materials that basically allow us to control the viscosity, or flow, of these fluids," said Giannelis, also Cornell's vice provost for research and vice president for technology transfer, intellectual property and research policy.
The researchers fabricated fingerlike actuators composed of two hydrogel materials that can retain water and respond to temperature - in effect, "smart" sponges. The base layer, made of poly-N-isopropylacrylamide, reacts to temperatures above 30 C (86 F) by shrinking, which squeezes water up into a top layer of polyacrylamide that is perforated with micron-sized pores. These pores are sensitive to the same temperature range and automatically dilate to release the "sweat," then close when the temperature drops below 30 C.
The evaporation of this water reduces the actuator's surface temperature by 21 C within 30 seconds, a cooling process that is approximately three times more efficient than in humans, the researchers found. The actuators are able to cool off roughly six times faster when exposed to wind from a fan.
"The best part of this synthetic strategy is that the thermal regulatory performance is based in the material itself," said Wallin. "We did not need to have sensors or other components to control the sweating rate. When the local temperature rose above the transition, the pores would simply open and close on their own."
The team incorporated the actuator fingers into a robot hand that could grab and lift objects, and they realized that autonomous sweating not only cooled the hand, but lowered the temperature of the object as well. While the lubrication could make a robot hand slippery, Shepherd says that modifications to the hydrogel texture could compensate by improving the hand's grip, much like wrinkles in skin.
One disadvantage of the technology is that it can hinder a robot's mobility. There is also a need for the robots to replenish their water supply, which has led Shepherd to envision soft robots that will someday not only perspire like mammals, but drink like them, too. The ability of a robot to secrete fluids could also lead to methods for absorbing nutrients, catalyzing reactions, removing contaminants and coating the robot's surface with a protective layer, the researchers wrote.
"I think that the future of making these more biologically analogous materials and robots is going to rely on the material composition," Shepherd said. "This brings up a point (about the importance of) multidisciplinary research in this area, where really no one group has all the answers."
Source and top image: Cornell University
Learn more at the next leading event on the topic: Printed Electronics Europe 2020