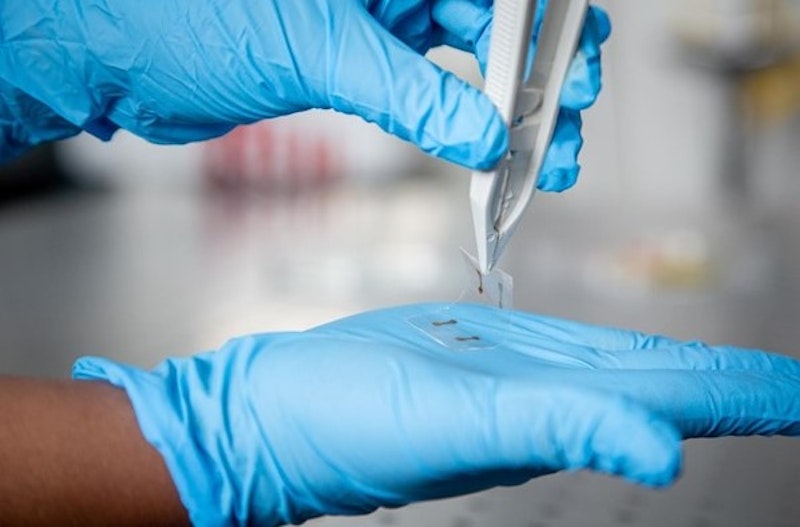 The first highly transparent, touch-responsive and conducting ultra-flexible thin sheets of indium tin oxide (ITO) have been made by researchers in Australia. Made using a new liquid metal printing technique, the ITO sheets are just 1.5 nm thick and can be deposited onto a variety of substrates - which can then be rolled up like a tube. They might be used to make the touchscreens of the future and could potentially be manufactured via roll-to-roll (R2R) processing - just like newspapers.
ITO is a transparent semiconductor and is used in applications such as touchscreens, smart windows and displays. The conventional way to make ITO involves evaporating the material in high vacuum and condensing it onto a surface such as a glass sheet using sputtering or pulsed laser deposition. These techniques are costly and time consuming. What is more, a relatively thick layer of ITO needs to be deposited to obtain a fully conductive film, which makes it brittle and thus unsuitable for flexible electronics applications. For more information see the IDTechEx report on Printed, Organic and Flexible Electronics 2020-2030: Forecasts, Technologies, Markets.
Liquid ITO alloy
The new method was developed by a team led by Torben Daeneke of RMIT University in Melbourne and Dorna Esrafilzadeh and Kourosh Kalantar-Zadeh from the University of New South Wales, Sydney. The technique uses a liquid ITO alloy that melts between 150°C and 200°C. The researchers allowed this melted alloy to oxidize and cool down in air and tuned its composition so that the natural surface oxide has the same composition as commercial ITO.
They discovered that the oxidation process is self-limiting, meaning that the oxide always has the same thickness - of about 1.5 nm. If the surface of this liquid metal is then brought into contact with a substrate such as glass or plastic, the nanometre-thick 2D ITO sheets adhere to the substrate.
The team also found that when they printed two layers of ITO, they observed a van der Waals gap between them, indicating that they had made a new type of ITO. The films can be laid on top of each other like thin paper and the greater the number of layers, the more conductive the material is. "You can bend hundreds of these 'papers' together and they don't break," explains Kalantar-Zadeh.
Much more transparent
The liquid metal printed ITO is much more transparent than conventional ITO while still being highly conductive (it has a sheet resistance of just 5.4 kΩ), adds Daeneke. Indeed, a single layer of 2D ITO only absorbs about 0.7% of visible light. This is roughly 8-10 times less than a single layer of graphene (another highly transparent 2D material made of a sheet of carbon atoms) and less than the 5-10% of standard conductive glass. And since 2D ITO is extremely thin, its mechanical properties change, making it highly flexible. This will allow the creation of a new generation of flexible, transparent and printed electronics, say Kalantar-Zadeh and Daeneke.
The fabrication process is extremely easy and accessible to all, they add. The fact that the 2D ITO can be printed at low temperatures and in air not only makes it cheaper than conventional methods but also resolves the size limitations dictated by techniques that require a vacuum.
Fully functional touchscreens
The researchers showed that their technique can produce centimetre-squared-sized samples that are of a high enough quality to make fully functional touchscreens. They have also applied for a patent for their technology.
"Our technique could change the way we make transparent electronics," they tell Physics World. "In the future we could simply print displays and touchscreens like we print newspaper. And since the 2D ITO is highly flexible, we could also create a new generation of displays that can be rolled up or folded."
The researchers report their work in Nature Electronics and say they are now working on up-scaling their process. "We expect that automation will allow us to produce much larger samples than the centimetre-sized 2D ITO sheets we have produced thus far," says Kalantar-Zadeh and Daeneke. "To this end, we are now looking for commercial partners that will help us move towards metre-scale production."
Source and top image: Institute of Physics