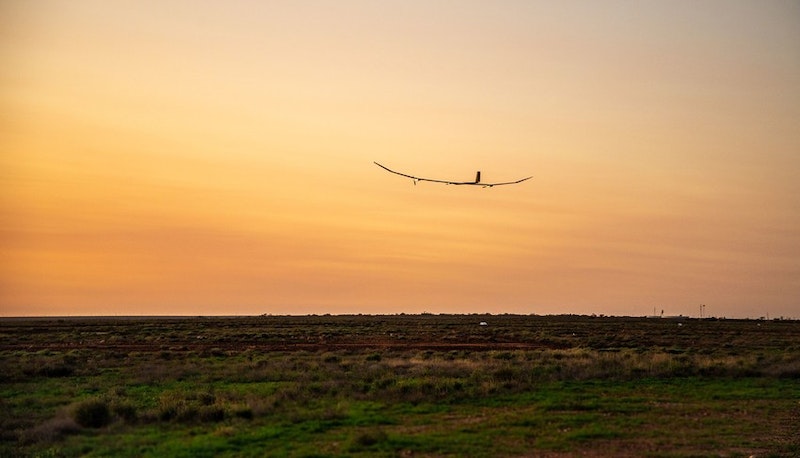 Persistent High Altitude Solar Aircraft (PHASA-35®) has the potential to stay airborne for a year. PHASA-35, a 35m wingspan solar-electric aircraft, has successfully completed its maiden flight. The landmark flight paves the way to this new aircraft becoming a game changer in the air and space market, plugging the gap between aircraft and satellite technology.
PHASA-35 has been designed, built and now flown in less than two years as part of a collaboration between BAE Systems and Prismatic Ltd. Designed to operate unmanned in the stratosphere, above the weather and conventional air traffic, PHASA-35 offers a persistent and affordable alternative to satellites combined with the flexibility of an aircraft, which could be used for a range of valuable applications including forest fire detection and maritime surveillance. For more information see the IDTechEx report on Energy Harvesting Microwatt to Megawatt 2019-2029.
Sponsored by the UK's Defence Science and Technology Laboratory (DSTL) and Australian Defence Science and Technology Group (DSTG), the successful flight trials took place at the Royal Australian Air Force (RAAF) Woomera Test Range in South Australia, with support from RAAF personnel on base with the trials team.
The trials marked the first fully integrated flight test of the PHASA-35 system, delivering rapid proof of capability from design to flight in just 20 months. They are the culmination of efforts from a collaborative team of British experts from Prismatic in Hampshire - where two full-sized concept aircraft were built last year - working alongside engineers in Lancashire, where the aircraft underwent further integration testing prior to flight trials.
Going the distance
As a High Altitude Long Endurance (HALE) vehicle, PHASA-35 is powered by the Sun during the day and by batteries overnight. The long-life battery and highly efficient solar technology could allow the aircraft to maintain flight for up to a year operating in the stratosphere, the upper regions of the Earth's atmosphere.
PHASA-35 is designed to provide a persistent, stable platform for monitoring, surveillance, communications and security applications. When connected to other technologies and assets, it will provide both military and commercial customers with capabilities that are not currently available from existing air and space platforms. The Unmanned Air Vehicle also has the potential to be used in the delivery of communications networks including 5G, as well as provide other services, such as disaster relief and border protection, at a fraction of the cost of satellites.
Ian Muldowney, Engineering Director here at BAE Systems, said: "This is an outstanding early result that demonstrates the pace that can be achieved when we bring the best of British capability together. To go from design to flight in less than two years shows that we can rise to the challenge the UK Government has set industry to deliver a Future Combat Air System within the next decade."
Source and top image: BAE Systems