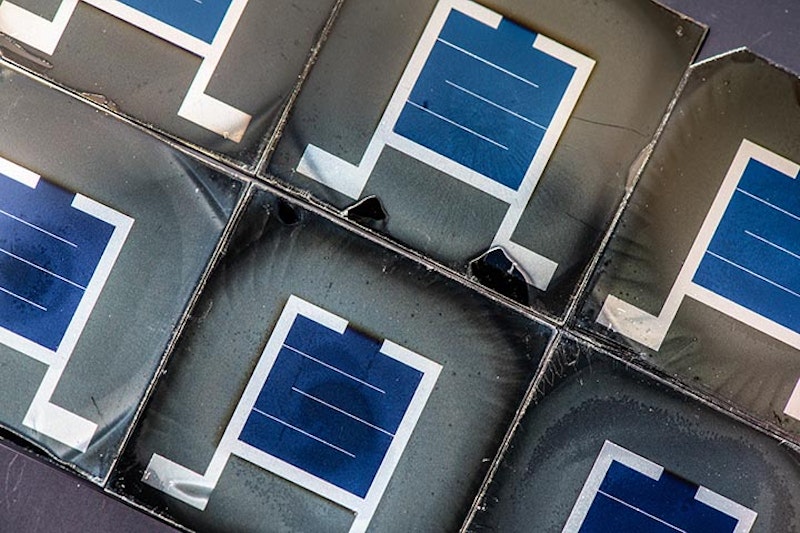 A change in chemical composition enabled scientists to boost the longevity and efficiency of a perovskite solar cell developed at the U.S. Department of Energy's (DOE's) National Renewable Energy Laboratory (NREL). The new formula enabled the solar cell to resist a stability problem that has so far thwarted the commercialization of perovskites. The problem is known as light-induced phase-segregation, which occurs when the alloys that make up the solar cells break down under exposure to continuous light.
"Now that we have shown that we are immune to this short-term, reversible phase-segregation, the next step is to continue to develop stable contact layers and architectures to achieve long-term reliability goals, allowing modules to last in the field for 25 years or more," said Caleb Boyd, lead author of a newly published paper in Science titled "Triple-halide wide-bandgap perovskites with suppressed phase-segregation for efficient tandems." Boyd and co-author Jixian Xu are associated with University of Colorado-Boulder Professor Michael McGehee's research group, which investigates perovskites at NREL. For more information see the IDTechEx report on Perovskite Photovoltaics 2018-2028.
Additional NREL scientists who contributed to the paper are Axel Palmstrom, Daniel Witter, Bryon Larson, Ryan France, Jérémie Werner, Steven Harvey, Eli Wolf, Maikel van Hest, Joseph Berry, and Joseph Luther.
Perovskite solar cells are typically made using a combination of iodine and bromine, or bromine and chlorine, but the researchers improved upon the formula by including all three types of halides. The research proved the feasibility of alloying the three materials.
Adding chlorine to iodine and bromine created a triple-halide perovskite phase and suppressed the light-induced phase-segregation even at an illumination of 100 suns. What degradation occurred was slight, at less than 4% after 1,000 hours of operation at 60 degrees Celsius. At 85 degrees and after operating for 500 hours, the solar cell lost only about 3% of its initial efficiency.
"The next step is to further demonstrate accelerated stability testing to really prove what might happen in 10 or 20 years in the field," Boyd said.
The new formula created a solar cell with an efficiency of 20.3%.
Silicon remains the dominant material used in solar cells, but the technology is approaching its theoretical maximum efficiency of 29.1%, with a record 26.7% established to date. But putting perovskites atop a silicon solar cell to create a multijunction solar cell could boost efficiency and bring down the cost of solar electricity. NREL scientists were able to create a tandem perovskite/silicon solar cell with an efficiency of 27%. By itself, the silicon solar cell had an efficiency of about 21%.
Source and top image: National Renewable Energy Laboratory