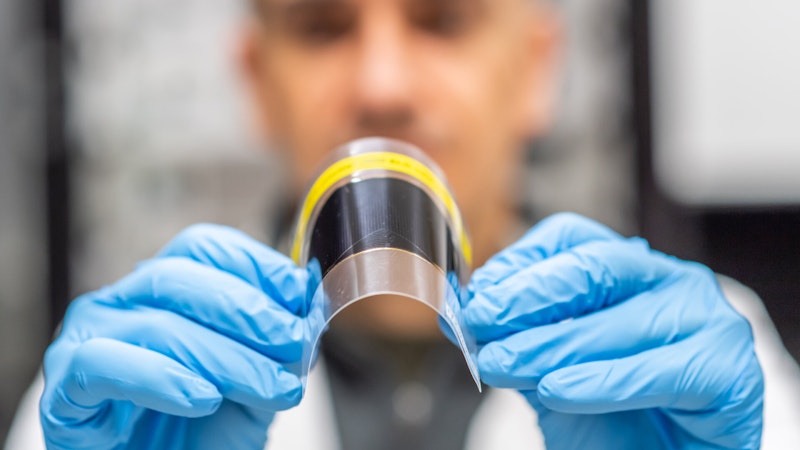 The European Space Agency (ESA) has backed the creation of this flexible, ultra-thin solar cell to deliver the best power to mass ratio for space missions.
Just about 0.02 mm thick - thinner than a human hair - the prototype solar cells were developed by Azur Space Solar Power in Germany and tf2 in the Netherlands; the cell seen above here is from tf2. The project was backed through ESA's Technology Development Element, investigating novel technologies for space. For further information see the IDTechEx report on Energy Harvesting Microwatt to Megawatt 2019-2029.
Possessing up to 32% 'end of life' efficiency, the solar cells were produced using a technique called 'epitaxial lift-off', meaning they were peeled off the Germanium substrate layer they were initially laid down on, so the costly material can be reused.
Both triple- and quadruple-junction solar cells were manufactured. This means they consist of three or four different layers of material, optimised to make use of different wavelengths of light making up the solar spectrum.
These thinner-than-paper solar cells could be harnessed for future ESA satellites or else high-altitude pseudo satellites (HAPS) - uncrewed aircraft or balloons to perform satellite-like tasks from the upper atmosphere.
Source and top image: European Space Agency