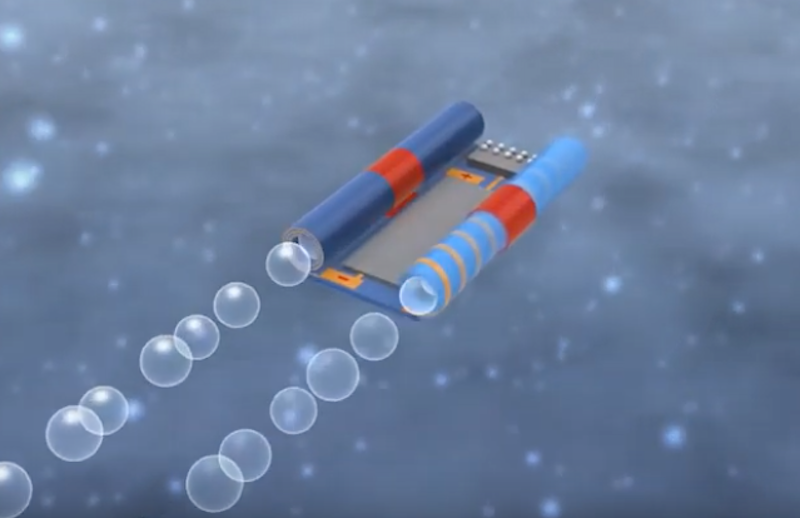 An international research team, led by Prof. Dr. Oliver G. Schmidt, Chair of the Professorship of Material Systems for Nanoelectronics at Chemnitz University of Technology, Initiator of the Center for Materials, Architectures and Integration of Nanomembranes (MAIN) at Chemnitz University of Technology and Director at the Leibniz Institute for Solid State and Materials Research (IFW) Dresden, has made a breakthrough. Nature Electronics is reporting on the development of the smallest microelectronic robot in the world, which is driven and controlled by a twin-jet-engine. The microelectronic robot is 0.8 mm long, 0.8 mm wide and 0.14 mm tall. To compare: a one cent piece has a diameter of around 16mm. The micro-robot is extremely flexible, motile and equipped with various functionalities. In addition to Chemnitz University of Technology and IFW Dresden, both the Technical University of Dresden and the Chinese Academy of Sciences Changchun are involved in the project.
A special aspect of this project is the availability of an on-board energy system, which enables the highly flexible micro-robot to perform various tasks. The system is also maneuverable in a water solution and can be controlled remotely. In addition, the robot has a light source and a micro-arm, which is able to be powered wirelessly. The use of this system in the areas of micro-robotics and medical technology could be envisioned for targeted administration of medication or directly diagnosing diseases within an organism. The results of this research are crucial to the development of microrobotic systems and are therefore selected as cover story of the current issue of Nature Electronics. For further information see the IDTechEx report on Mobile Robots, Autonomous Vehicles, and Drones in Logistics, Warehousing, and Delivery 2020-2040.
Control and steerability implemented for the first time in wireless microelectronic robots
For over ten years, micro-robot and micromotor research has generated increasing global interest among scientists from various disciplines. In particular, the concept of using a medical mini submarine with its own controllable drive has repeatedly spurred both fundamental and applied research. The goal of this is to develop a fully controllable and steerable microelectronic robot - long considered science fiction, until now. Although there are chemically-powered micromotors that are being tested in medical studies in the US for the curing of certain illnesses, they are very simple systems that have no electrical energy or microelectronic units on board. A targeted control and steering of the microrobots is therefore not possible. This has changed with the system developed by Oliver G. Schmidt and his team, which is based on a nine-year-old idea.
A fully remote controllable micro-drive - a nine-year-old idea becomes reality
"Almost ten years ago, my team and I came up with the idea to combine tiny chemical nozzle drives with microelectronic components, in order to bring together two disciplines that until then had little in common. It is wonderful to see that this idea has come to fruition due to the technologically innovative strength of my Ph.D. student Vineeth Kumar Bandari, as well as the extraordinary scientific engagement of Dr. Feng Zhu, and it can now be experimentally realized in a first, simplified form," says Schmidt.
The propulsion unit of the system as it is now presented consists of rolled-up microtubes that generate thrust through the pressurized ejection of oxygen bubbles. The researchers were able to thermally control this process in one of the two microtubes, and thus steer the microrobot in various directions.
The researchers produced the complete microelectronic system from a combination of polymer-based nanomembranes, which represents a significant and key element in the development. The construction is mechanically highly flexible, and it enables the inclusion of electronic components and controllable actuators.
At the final stages, the team made a thin layer of a thermoresponsive polymer and introduced it as an actuator at one end of the micro-robotic system. Due to the adjustable localized increase or decrease in temperature, it is possible to open and close this thermoresponsive micro-arm in order to grab and release tiny objects.
Electrical energy in a microrobot - groundbreaking findings
Since the micro-robot needs energy, but cannot simply be charged at a socket, a system for wireless energy transmission is used, which consists of integrating an external transmitter and an on-board receiver coil into the microsystem. The energy is transmitted by induction - this principle is similar to how a cell phone is able to be wirelessly charged. This is the first time that the wireless transmission of electrical energy can be used in such a small microrobot.
With their pioneering work in manufacturing the smallest microelectronic robot that features wireless energy, remote controls, full maneuverability and actuators, the research team led by Prof. Dr. Oliver G. Schmidt has achieved a key milestone for the future use of autonomously working microrobots in the biomedical sector.
Since hydrogen peroxide is currently also a required part of the propulsion fuel, the system in its current configuration cannot be directly used in the human body. This will require further development, which represents the next steps taken by the research team.
Source and top image: Chemnitz University of Technology