In research that gives literal meaning to the term "power suit," University of California, Berkeley, engineers have created energy-scavenging nanofibers that could one day be woven into clothing and textiles. These nano-sized generators have "piezoelectric" properties that allow them to convert into electricity the energy created through mechanical stress, stretches and twists.
"This technology could eventually lead to wearable 'smart clothes' that can power hand-held electronics through ordinary body movements," said Liwei Lin, UC Berkeley professor of mechanical engineering and head of the international research team that developed the fiber nanogenerators.
Because the nanofibers are made from organic polyvinylidene fluoride, or PVDF, they are flexible and relatively easy and cheap to manufacture.
Although they are still working out the exact calculations, the researchers noted that more vigorous movements should theoretically generate more power. "And because the nanofibers are so small, we could weave them right into clothes with no perceptible change in comfort for the user," said Lin, who is also co-director of the Berkeley Sensor and Actuator Center at UC Berkeley. 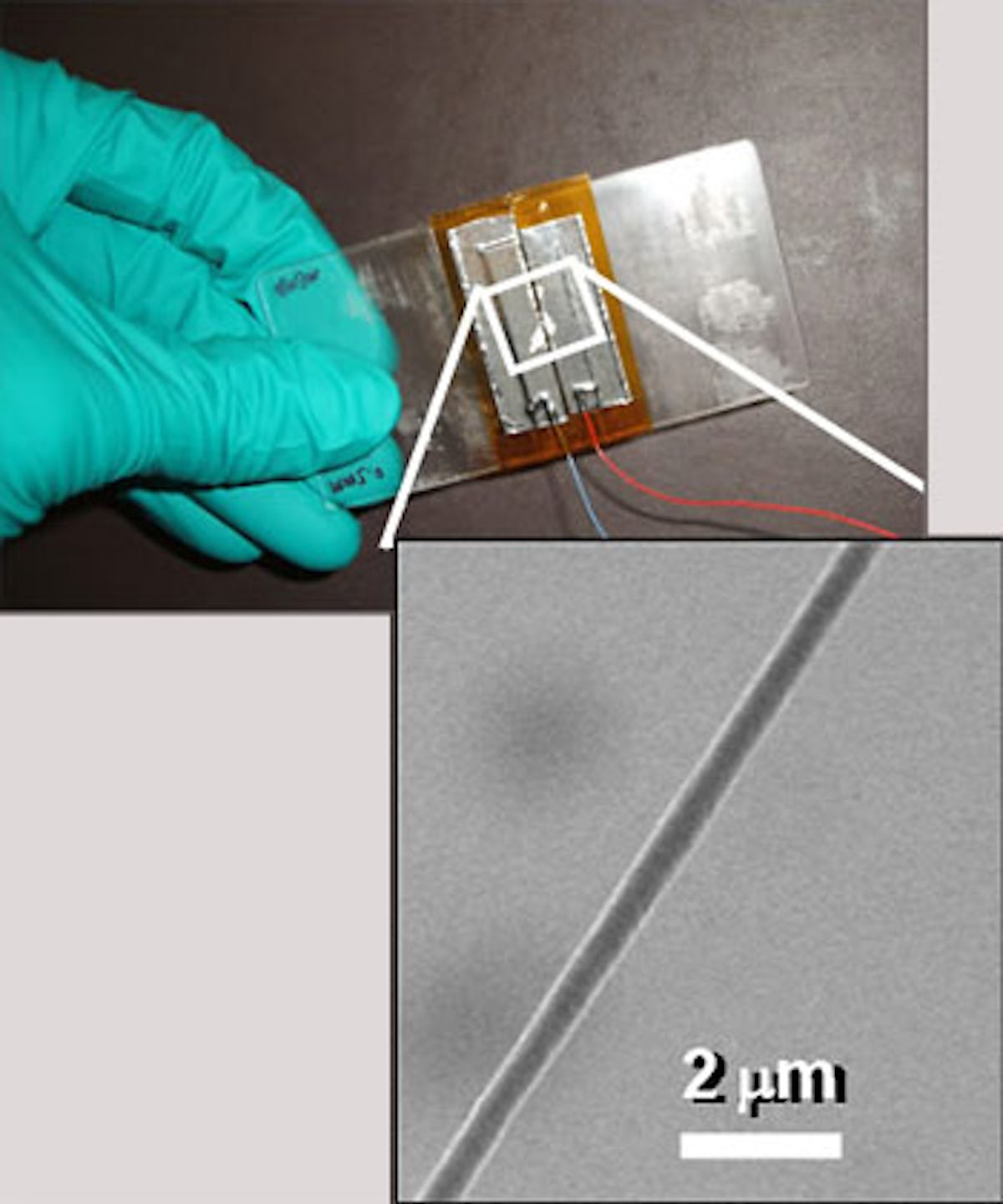 Fiber nanogenerator on a plastic substrate. Source UC Berkeley
The goal of harvesting energy from mechanical movements through wearable nanogenerators is not new. Other research teams have previously made nanogenerators out of inorganic semiconducting materials, such as zinc oxide or barium titanate. "Inorganic nanogenerators — in contrast to the organic nanogenerators we created — are more brittle and harder to grow in significant quantities," Lin said.
The tiny nanogenerators have diameters as small as 500 nanometers, or about 100 times thinner than a human hair and one-tenth the width of common cloth fibers. The researchers repeatedly tugged and tweaked the nanofibers, generating electrical outputs ranging from 5 to 30 millivolts and 0.5 to 3 nanoamps. Furthermore, the researchers report no noticeable degradation after stretching and releasing the nanofibers for 100 minutes at a frequency of 0.5 hertz (cycles per second).
Lin's team at UC Berkeley pioneered the near-field electrospinning technique used to create and position the polymeric nanogenerators 50 micrometers apart in a grid pattern. The technology enables greater control of the placement of the nanofibers onto a surface, allowing researchers to properly align the fiber nanogenerators so that positive and negative poles are on opposite ends, similar to the poles on a battery. Without this control, the researchers explained, the negative and positive poles might cancel each other out and reduce energy efficiency.
The researchers demonstrated energy conversion efficiencies as high as 21.8 percent, with an average of 12.5 percent. "Surprisingly, the energy efficiency ratings of the nanofibers are much greater than the 0.5 to 4 percent achieved in typical power generators made from experimental piezoelectric PVDF thin films, and the 6.8 percent in nanogenerators made from zinc oxide fine wires," said the study's lead author, Chieh Chang, who conducted the experiments while he was a graduate student in mechanical engineering at UC Berkeley.
"We think the efficiency likely could be raised further," Lin said. "For our preliminary results, we see a trend that the smaller the fiber we have, the better the energy efficiency. We don't know what the limit is."
Other co-authors of the study are Yiin-Kuen Fuh, a UC Berkeley graduate student in mechanical engineering; Van H. Tran, a graduate student at the Technische Universität München (Technical University of Munich) in Germany; and Junbo Wang, a researcher at the Institute of Electronics at the Chinese Academy of Sciences in Beijing, China. The National Science Foundation and the Defense Advanced Research Projects Agency helped support this research.
Source: UC Berkeley
Top image source: Fractal Road
For more read : Energy Harvesting and Storage for Electronic Devices 2009-2019
and attend Energy Harvesting & Storage Europe and Wireless Sensor Networks & RTLS Summit 2010