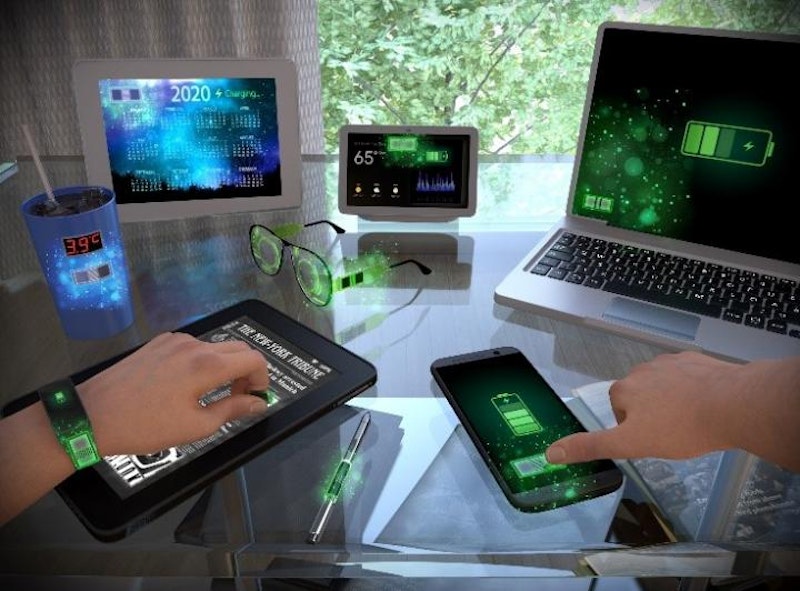 Researchers at the Energy Conversion & Storage Materials Laboratory of Korea Institute of Energy Research (KIER) have jointly developed 're-attachable micro-supercapacitors (MSCs) using highly swollen laser-induced-graphene electrodes' and their research findings were listed in Chemical Engineering Journal*, one of the world-renowned in the field.
As demands for lighter and smaller wearable devices and high functional IoT gadgets rise, there is a growing need for new technologies for power collection, storage, management. Wearable devices and IoT products are increasingly applied to various sectors of the society these days. Hence, researchers are actively carrying out R&D activities to develop energy storage devices with additional functions besides power supply. For further information see the IDTechEx report on Supercapacitors: Applications, Players, Markets 2020-2040.
Preconditions of wearable energy storage devices are that they should be able to change their forms along with changing shapes of human body and movements while being flexible, safe to use, and providing excellent durability. The conventional batteries were not flexible as they were developed to have a cylindrical, prismatic, or pouch type base structure and had limited energy densities. So, they had some limitations to be applied to next-generation products such as wearable devices or micro devices that require high flexibility, portability and areal or volumetric energy densities.
In the past, R&D efforts to develop energy storage devices for wearable devices were mostly put on Li thin-film batteries. Li thin-film microbatteries, which are widely and commercially available power sources for microelectronics, suffer from short life cycles, abrupt failures, unstable low-temperature kinetics, and pose safety concerns when associated with lithium.
Recently, MSCs are gaining high attention as next-generation energy storage devices to replace Li thin-film batteries. In principle, the supercapacitors were semi permanent to use and had many benefits such as high power densities (10 times more compared with lithium ion batteries), stability, efficiency and fast charge/discharge rates. However, their scope of use was somewhat limited to certain areas due to a low energy density per load (which was estimated as 1/10 of Li batteries). Compared to supercapacitors, MSCs have a significantly higher power density than lithium batteries and energy densities are similar or even higher than their rivals. Hence, they are considered as an alternative for ultra-thin high-performance energy storage devices.
The research team successfully developed sticker-type flexible MSCs that had a flexible structure and can be attached everywhere on objects or surfaces by using ultrashort-pulse-lasers.
Ultrashort-pulse laser can instantly generate strong intensity to make highly swollen graphene electrodes. By impregnating adhesive polymer composites to the inside of highly swollen graphene, researchers were able to develop sticker-type MSCs with excellent electrodes performance and durability while maintaining adhesiveness.
Dopamine, a functional mimic of the adhesive protein of mussel, was introduced as a coating material for the sticker-type flexible MSCs to improve electrochemical performance. The catechol groups in dopamine provide redox-active moieties for pseudocapacitive electrodes. By doing so, they were able to develop sticker-type flexible energy storage devices that had high volumetric energy densities similar to that of lithium thin-film batteries with excellent volumetric power density, 13 times greater than that of their counterparts.
Dr Hana Yoon of KIER, the principle investigator of this study, said "Our sticker-type flexible MSCs are easily re-attached to next-generation wearable devices and IoT gadgets and eco-friendly. They are expected to solve many obstacles of lithium based energy storage technologies."
Also, KAIST professor, Young-jin Kim, a co-researcher of this study, said, "The patterning technology developed from this study generated unique swollen graphene with ultrashort-pulse-laser in a relatively short period time, while minimizing loss of materials. This technology has a potential to promote industrial applications of laser-induced-graphene to various sectors."
Source and top image: National Research Council of Science & Technology