RFID sensors are commonly used to track a wide variety of items, from products in a supply chain to baggage at an airport.
GE is developing sensors that combine RFID tracking with an acute gas sensing capability, which can detect the presence of potentially harmful chemical agents in the air. Because these sensors can be made at a size smaller than a penny, they can be part of a typical identification badge and serve as a pre-emptive or early warning sign for people regarding the presence of chemical agents in the air.
Detecting chemical agents in this way could provide much more information about the relationship between a person's health and the environment in which a person lives.
Radislav Potyrailo, a principal scientist at GE Global Research who is leading the wearable RFID sensor project, said, "We are creating a dynamic sensing platform that will provide real-time information to people about the presence of potentially harmful chemical agents in the air."
Potyrailo added, "GE's sensing platform could be readily adapted to many other interesting applications. For example, it could be used to analyze a person's breath. Simply breathing on the sensor could potentially pick up biomarkers that serve as an early signal to the presence of certain diseases such as diabetes or cancer and metabolic disorders. "
Breath analysis is an area being extensively studied by many in both the sensing and medical communities. Breath sensors could be implemented for a variety of applications ranging from disease diagnosis, to occupational health monitoring, and physiological, metabolic, and therapeutic studies.
GE's sensor could serve as an early warning sign for diseases by identifying volatile biomarkers associated with different types of diseases such as diabetes, lung diseases and metabolic disorders.
The demand for new sensors to detect volatile organic compounds (VOCs) and chemical agents in air is driven by the need for self-contained, simple approaches for simultaneous, highly selective measurements of multiple vapors. Several key requirements for the new wearable sensors include:
The sensor system, being developed and funded is part of the National Institute of Environmental Health Sciences (NIEHS project), will employ a novel sensing approach that utilizes resonant antenna structures of RFID sensors that are coated with various sensing films. This new sensing approach will provide selective quantitation of VOCs and chemical agents with part-per-billion detection limits in the presence of uncontrolled variations of ambient humidity.
This response selectivity will be achieved by the combination of recognition of vapors by the sensing film, new design of sensor transducer to fully probe the vapor-film interactions, and multivariate analysis of the complex impedance response of the resonant RFID antenna structure.
GE has tested the sensors in a variety of applications so far. One of those is the detection of food spoilage, as shown below. The RFID sensor is placed on the outside of the milk carton and allows for non invasive detection - it can detect the spoilage through the carton wall. 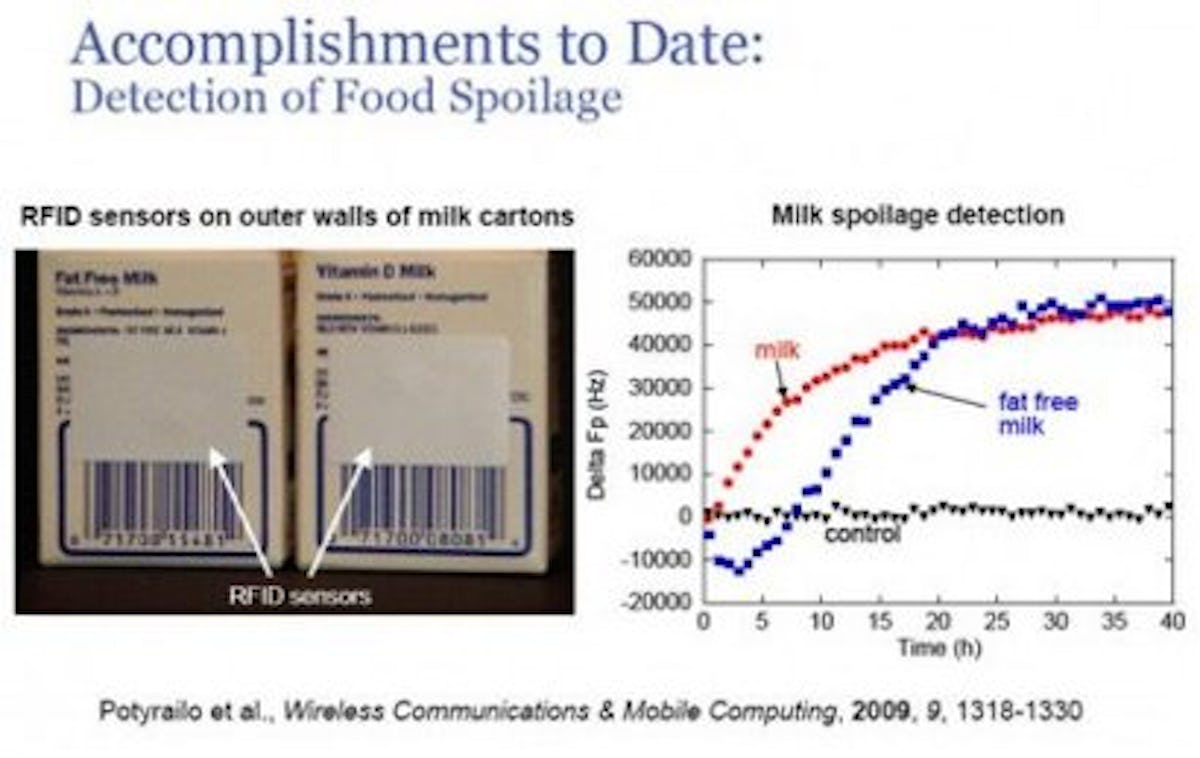 Dear Printed Electronics World, I am a high schooler in colorado, and I am doing this science fair project that uses these scent detectors while you are hunting, say elk for example. With modifications, this sensor will be able to vibrate your rifle when the elk are detcted. Is there any possible way to purchase this sensor for a reasonable price?