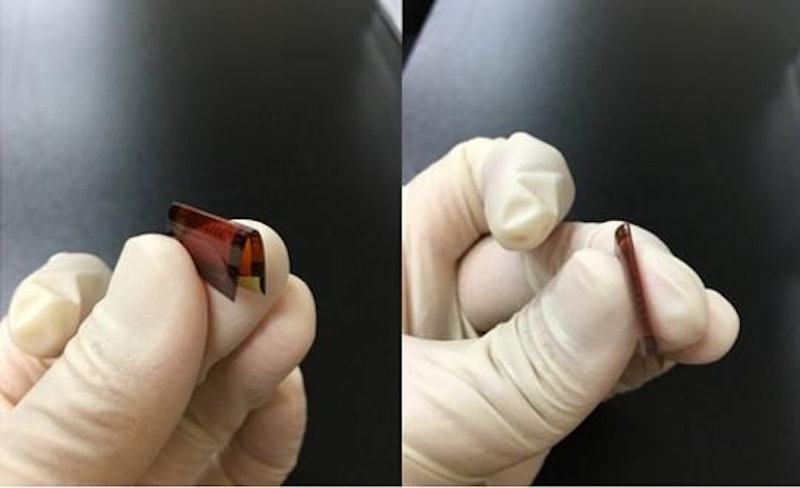 The prospect of the widespread commercialization and application of flexible electronics has kept researchers worldwide searching for ingenious ways to enhance their performance and durability. From wearable smart devices to solar cells and health sensors, flexible electronics holds much promise in many engineering fields. Unfortunately, flexible devices are usually as fragile as they look; mechanical deformations, such as bending, can induce the formation and propagation of microscopic cracks that ultimately cause devices to fail.
In a recent study, a research team led by Professor Jae Eun Jang from Daegu Gyeongbuk Institute of Science and Technology found a method to greatly improve the durability of thin-film flexible electrodes and transistors, key components in electronics. The method is simple: take your standard flexible conducting film and fill it with micrometer-sized holes in a zigzag pattern. For further information see the IDTechEx report on Printed, Organic and Flexible Electronics 2020-2030: Forecasts, Technologies, Markets.
The researchers actually drew inspiration from civil engineering, as Prof Jang explains. "We happened to be passing by a construction site, when we saw steel plates with holes, often used in construction. We knew that these steel plates with holes are used to reduce stress. We thought that this method could also be a solution in the micrometer world and, based on this idea, we began conducting experiments." In the field of mechanics, the word "stress" refers to the forces that the particles of a material exert on each other. External forces increase the stress of a material and can induce the formation of cracks.
In regular thin-film flexible conductors, cracks form in random locations when bent. However, if the flexible conductor bears the array of micrometer-sized holes, the stress distribution of the material changes so that cracks only form at specific points near the edges of the holes and propagate over a short distance. This, as proved through simulations and experiments, allowed their flexible metal electrodes to endure thousands of bending motions. Professor Jang states: "Our devices were able to maintain conductivity up to 300,000 bending cycles, which means that they can be bent over 80 times a day for 10 years."
What's more, compared with other methods for improving the durability of flexible electronic devices, the proposed approach is inexpensive and easy to adopt using equipment already employed in the display industry.
Source and top image: DGIST (Daegu Gyeongbuk Institute of Science and Technology)