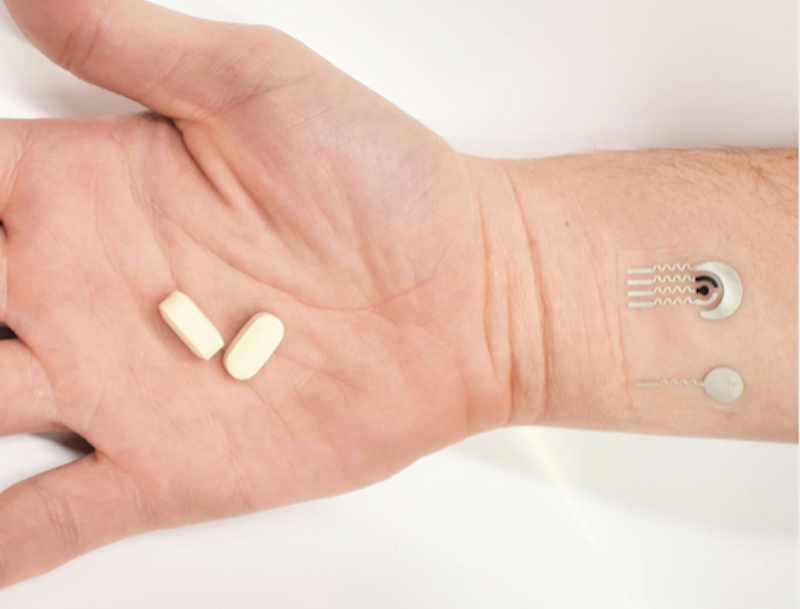 A team at the University of California San Diego has developed a wearable, non invasive Vitamin C sensor that could provide a new, highly personalized option for users to track their daily nutritional intake and dietary adherence.
"Wearable sensors have traditionally been focused on their use in tracking physical activity, or for monitoring disease pathologies, like in diabetes," said first-author Juliane Sempionatto, a PhD Candidate in nanoengineering in Joseph Wang's lab at the UC San Diego Jacobs School of Engineering. "This is the first demonstration of using an enzyme-based approach to track changes in the level of a necessary vitamin, and opens a new frontier in the wearable device arena." For further information see the IDTechEx report on Electronic Skin Patches 2020-2030.
"Wearable sensors have rarely been considered for precision nutrition," said Joseph Wang, a professor of nanoengineering and director of the Center of Wearable Sensors at UC San Diego.
Why vitamin C is important
Vitamin C is an essential dietary component, as it cannot be synthesized by the human body and must be obtained through our food or via vitamin supplements. The vitamin is important for supporting immune health and collagen production, a vital player in wound healing, as well as improving iron absorption from plant-based foods. Ongoing research is examining whether or not the vitamin's role as an antioxidant might support its use in treating diseases like cancer and heart disease.
Most pressingly, the vitamin is being studied in several clinical trials for its potential in supporting recovery from COVID-19, the disease caused by the novel SARS-CoV-2 virus. A handful of past studies have linked high doses of vitamin C, alongside other treatments, to reduced mortality rates in patients with sepsis and, in one study, acute respiratory distress syndrome (ARDS) - both common conditions seen in serious cases where patients with COVID-19 require intensive care and intubation.
If vitamin C does help patients recover from the disease, such a wearable sensor might aid doctors and recovering patients in tracking their vitamin C levels during treatment and recovery, providing an opportunity for healthcare providers to precisely tune vitamin supplementation to match a patient's needs.
The wearable device
The new wearable device consists of an adhesive patch that can be applied to a user's skin, containing a system to stimulate sweating and an electrode sensor designed to quickly detect vitamin C levels in sweat. To do so, the device includes flexible electrodes containing the enzyme ascorbate oxidase. When vitamin C is present, the enzyme converts it to dehydroascrobic acid and the resulting consumption of oxygen generates a current that is measured by the device.
In vitro testing and testing in four human subjects who had consumed vitamin C supplements and vitamin C-containing fruit juices showed that the device was highly sensitive to detecting changes in the levels and dynamics of the vitamin when tracked across two hours. The researchers also tested the electrode detector's ability to detect temporal vitamin C changes in tears and saliva, demonstrating its cross-functionality. Differences observed in the vitamin C dynamics across different human subjects indicates that the device has promise for personal nutrition applications.
"Ultimately, this sort of device would be valuable for supporting behavioral changes around diet and nutrition," said Sempionatto. "A user could track not just vitamin C, but other nutrients - a multivitamin patch, if you will. This is a field that will keep growing fast." The UC San Diego team is closely collaborating with a major global nutrition company DSM towards the use of wearable sensors for personal nutrition.
"Despite the rapid development of wearable biosensors, the potential of these devices to guide personalized nutrition has not yet been reported," said Wang. "I hope that the new epidermal patch will facilitate the use of wearable sensors for non-invasive nutrition status assessments and tracking of nutrient uptake toward detecting and correcting nutritional deficiencies, assessing adherence to vitamin intake, and supporting dietary behavior change."
With the pressing need to develop new treatments for COVID-19, the team is also looking for ways to quickly get this technology into a clinical setting, in the event that vitamin C does prove to be a helpful treatment for the disease.
Source and top image: University of California San Diego