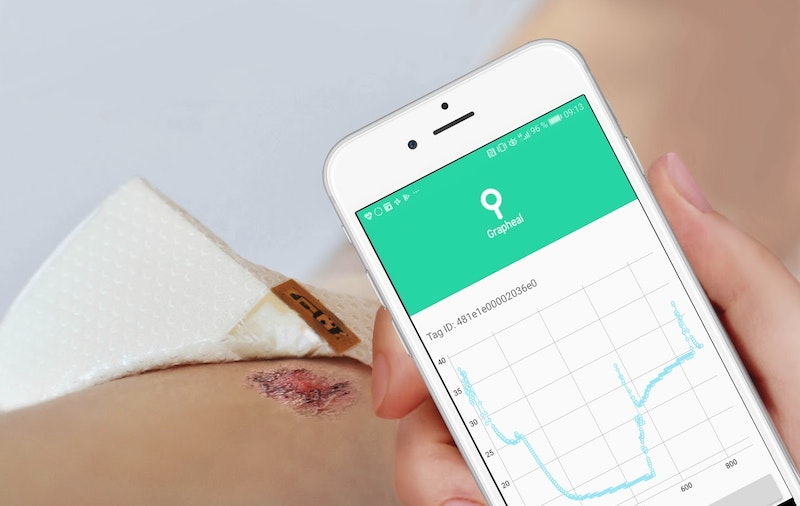 Graphene is hailed as the first two-dimensional material and was first isolated in 2004. Since then, initiatives like the EU-funded Graphene Flagship project have enabled the discovery of thousands of other two-dimensional and layered materials. Here, Kari Hjelt, the Graphene Flagship Head of Innovation, explains the potential of these materials in healthcare applications.
Graphene has already attracted huge amounts of interest in industry. Due to its excellent properties such as high mobility, conductivity and mechanical strength, it is proving favourable for a range of applications - and healthcare is no exception.
This single-layered material, which is only one atom thick, is a preferential choice in many biomedical applications. With its honeycomb-like planar structure, graphene provides higher surface area which increases its suitability to healthcare applications in drug delivery, gene vector and sensing applications. For further information see the IDTechEx report on Advanced Wound Care Technologies 2020-2030.
Before jumping into its potential in healthcare, it's worth examining why graphene trumps other material options. The properties of graphene are extraordinary; it is a million times thinner than paper, stronger than diamond and more conductive than copper. It is no surprise then, that the European Commission funded the Graphene Flagship, an ambitious, long-term €1 billion project to support its development and industrialisation.
Investment in research and development has allowed graphene to emerge as an innovative material in healthcare. In fact, the potential of graphene in this realm ranges from treating some serious diseases, to helping athletes manage biophysical stress.
The Graphene Flagship is conducting several ventures to bring this potential to the market, including the CHEMsens Spearhead Project — a project to develop a graphene-enabled plaster sensor for human skin.
The multifunctional plaster, which is currently in development and set to reach the market by April 2020, is based on functionalised graphene to detect and analyse biological data on human skin. By tracking key stress markers present in the sweat of athletes through sodium, potassium, lactic acid and glucose, the sensor can measure biophysical stress to help athletes train optimally.
"CHEMsens has been focussed on the development of a novel generation of biochemical sensor to monitor the biophysical stress, in a portable device that can be used while doing sports," explained Professor Paolo Samori, the work package leader for the CHEMsens project. "This spearhead project, which gathered new partners, was aimed at the development of a prototype of sensor. Such prototype has been developed. Yet, due to the current circumstances and various labs being still closed, the last optimisation steps still need to be accomplished."
As well as athletic applications, graphene could be used for major medical breakthroughs. Research has suggested that graphene could be used as a drug carrier for the delivery of anticancer chemotherapy drugs. While tests are ongoing for nano-oncology - that's the application of nanotechnology for cancer - early research is incredibly promising and could revolutionise cancer treatments.
Furthermore, Graphene Flagship's Associate Member Grapheal, has developed a pioneering wearable patch for the remote monitoring of chronic wounds. The flexible and transparent graphene-based biosensor allows doctors and nurses to provide hyper-responsive treatment of chronic wounds.
The wearable patch is connected to a smart phone, which enables the monitoring of wounds to empower wound sufferers with an accurate assessment tool. The wound patch measures and stores the bio parameters of the wound and communicates this data to the cloud via a smartphone app. This connectivity ensures nurses and doctors can be alerted to early stages of infection and other complications.
In healthcare, graphene technologies are being developed to create anticancer agents, surgical and dental implants, therapeutic remedies, wound healing, water purification and DNA sequencing - just to name a few. Graphene is not only being the first modern two-dimensional material, but is set to be the material of the future too.
For more information about graphene and the projects funded by the Graphene Flagship, please visit: graphene-flagship.eu

.
The Graphene Flagship is one of the largest research projects funded by the European Commission. With a budget of €1 billion over 10 years, it represents a new form of joint, coordinated research, forming Europe's biggest ever research initiative. The Flagship is tasked with bringing together academic and industrial researchers to take graphene from academic laboratories into European society, thus generating economic growth, new jobs and new opportunities.
Source and top image: Graphene Flagship