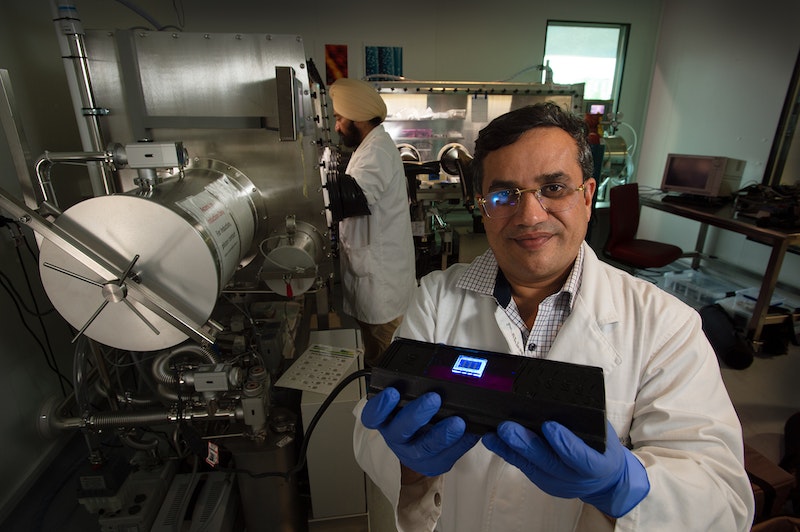 Associate Professor Prashant Sonar, Professor Ken (Kostya) Ostrikov and the research team, including PhD student Amandeep Singh Pannu, and in collaboration with Professor Qin Li of Griffith University, have developed a method of turning the small hair strands into carbon nanodots, which are tiny, uniform dots that are one-millionth of a millimetre. The researchers sourced the hair scraps from the Ben Scissorhands barbershop at Kelvin Grove, with barber Benjamin Mir happy to support the research project. For further information see the IDTechEx report on Flexible, Printed OLED Displays 2020-2030: Forecasts, Markets, Technologies.
To produce the carbon nanodots, the researchers developed a two-step process that involved breaking down the hairs and then burning them at 240 degrees Celcius. Professor Sonar and Professor Ostrikov, who are chief investigators with the QUT Centre for Materials Science, said the research published in the journal Advanced Materials was the first example of human hair waste being turned into highly luminescent carbon nanomaterial from which flexible light-emitting devices were fabricated.
The processed nanodots were uniformly dispersed in a polymer and then allowed to self-assemble to form "nano-islands", or small groupings of the nanodots. The formation of islands preserves the emission from a material in the solid state which is essentially needed for incorporating any nanomaterial into a device. These nano-islands were used as an active layer in organic light-emitting diode (OLED) devices. The device lit up with a blue colour when a modest voltage, approximately equal to two or three pencil batteries, was applied to the device.
"Waste is a big problem," Professor Sonar said. "Human hair derived carbon dot-based organic light-emitting devices could be used for some indoor applications such as smart packaging. They could also be used where a small light source is required such as in signs or in smart bands and could be used in medical devices because of the non-toxicity of the material."
Mr Singh said from the start of his doctoral research he had been very keen to use waste and turn it into a valuable material. Professor Sonar said there could be many uses for small and cheap flexible OLED displays on Internet of Things (IoT) devices. One hypothetical example is a smart milk bottle, with a sensor built inside to give a real-time update of the milk's expiry, with that information displayed on a screen on the outside.
Professor Sonar said the reason the researchers chose hair to extract carbon dots, rather than something else, was that hairs were a natural source of carbon and nitrogen, which are key elements to obtain light-emitting particles. Another factor was that finding a practical use for waste hair could keep it from ending up in landfill. Human hair is made up of proteins (polymers of amino acids) including keratin, which breaks down upon controlled heating. The material remaining after heating has both carbon and nitrogen embedded in its molecular structure, which gives it favourable electronic properties.
Professor Sonar said the carbon nanodots produced from human hair did not glow bright enough to be able to be used in television screens but could be used in a range of flexible screens from wearable devices to smart packaging. "We have proven it works for human hair. We're now interested if we could get the same results from animal hair," Professor Sonar said "Perhaps we could produce flexible OLEDs using small strands of wool from sheep or leftover dog hair from pet grooming salons."
Amandeep will continue his research work on this direction under Professor Ostrikov and Associate Professor Prashant Sonar to explore more opportunities about using these carbon nanostructures for future electronics and underlying nanoscience.
Professor Sonar, Professor Ostrikov, and the team of researchers, including Mr Singh, and in collaboration with Professor Li of Griffith University, have also published further research in the journal Sustainable Materials and Technologies on how carbon dots made from human hair could also be used to develop a sensor that can perform real-time monitoring of chloroform levels in water treatment systems.
Chloroform is one of the by-products when chlorine is used for water disinfection. The World Health Organization (WHO) has set a safe limit of chloroform of less than 300 parts per billion in drinking water. Professor Sonar said the research had found the carbon dots made from human hair responded to the presence of chloroform with high sensitivity and selectivity.
"The creation of valuable material from human hair waste that has potential uses in both display and sensing opens up an opportunity towards a circular economy and sustainable material technology," he said.
Source and top image: Queensland University of Technology