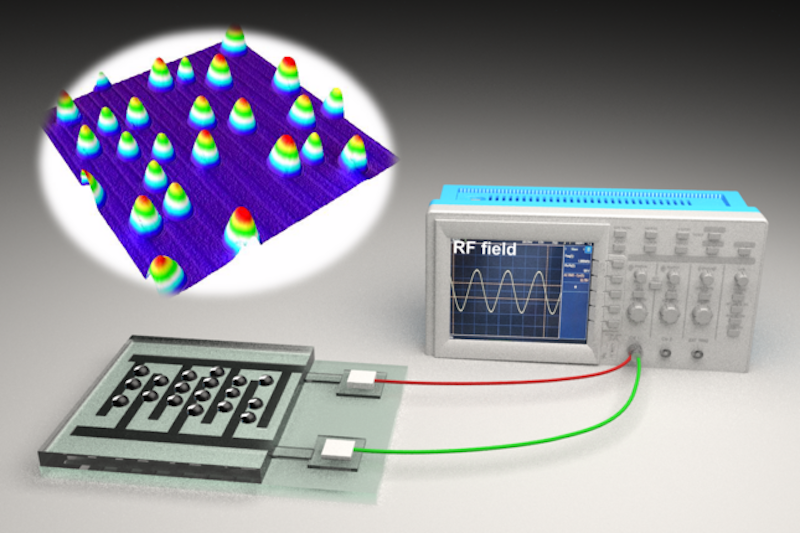 Imagine a dressing that releases antibiotics on demand and absorbs excessive wound exudate at the same time. Researchers at Eindhoven University of Technology hope to achieve just that, by developing a smart coating that actively releases and absorbs multiple fluids, triggered by a radio signal. This material is not only beneficial for the health care industry, it is also very promising in the field of robotics or even virtual reality.
TU/e-researcher Danqing Liu, the lead author of this paper, and her PhD student Yuanyuan Zhan are inspired by the skins of living creatures. Human skin secretes oil to defend against bacteria and sweats to regulate the body temperature. A fish secretes mucus from its skin to reduce friction from the water to swim faster. Liu now presents an artificial skin: a smart surface that can actively and repeatedly release and reabsorb substances under environmental stimuli, in this case radio waves. And that is special, as in the field of smart materials, most approaches are limited to passive release. For further information see the IDTechEx report on Advanced Wound Care Technologies 2020-2030.
The potential applications are numerous. Dressings using this type of material could regulate drug delivery, to administer a drug on demand over a longer time and then 're-load' with a different drug. Robots could use the layer of skin to 'sweat' for cooling themselves, which reduces the need for heavy ventilators inside their bodies. Machines could release lubricant to mechanical parts when needed. Or advanced controllers for virtual reality gaming could be made, that get wet or dry to enhance the human perception.
The basis of the material, the coating, is made of liquid-crystal molecules, well-known from LCD screens. These molecules have so-called responsive properties. Liu: "You could imagine this as a communication material. It communicates with its environment and reacts to stimuli." With her team she discovered that the liquid-crystal molecules react to radio waves. When the waves are turned on, the molecules twist to orient with the waves' direction of travel. By knowing this, Liu and her team decided to insert numerous micrometer-sized pores in the coating. Once filled with the desired liquid, the system acts like a sponge. "When the radio waves are turned on, the liquid-crystal molecules move direction and therefore wring the liquid out of the pores," explains Liu. She continues: "The coating even sweats more as the radio signal becomes stronger."
The reabsorption properties make this material even more special. An integrated capillary function can reabsorb the droplets on the surface within several seconds. Liu: "With this feature, we can make surfaces that on command can be 'wet' or 'dry', for example to vary the level of lubrication or surface adhesion."
Liu worked with triggers like heat, light and electricity before, to switch her material on and off. But radio signals are a first: "In my field of material sciences, we often use the same electricity as in houses (50-60 Hz), but this frequency is deadly to touch. As we want to apply the material to robots and dressings, we needed to develop a material that is safe to handle." That's why Liu uses radio frequency alternating electric fields (20 kHz to 300 GHz), similar to a Wi-Fi signal, which is low-energy and non-ionizing radiation.
"The high frequency we use was invented for the electrical car. It cannot penetrate the body, and therefore it is completely safe to touch. It is already a common frequency in the health care industry, for example in electrical therapies." Safety, however, is not the only advantage of using radio signals. This type of trigger can also be integrated directly in robotic devices as they are powered by high frequency electricity already.
The next step for Liu and her team will be to load the pores with liquids like antibiotics, lubricant or alcohol. Liu: "We hope to make big steps for that phase this summer." When that succeeds, re-loading will be the next phase, which will probably take three years to complete. Liu estimates to have a first model of a dressing by 2025. "Developing a robot with an artificial skin will probably take much longer. This is because next to our own field of materials science, we also need engineers to help us build the robot."
As a parallel project, Liu tries to combine different triggers. "If we can combine UV light and radio waves, it would be possible to choose the best fitting stimulant on the go. For example, when exposed to sunlight the secretion takes place, but when sunlight is not accessible, we switch to radio waves."
Source and top image: Eindhoven University of Technology