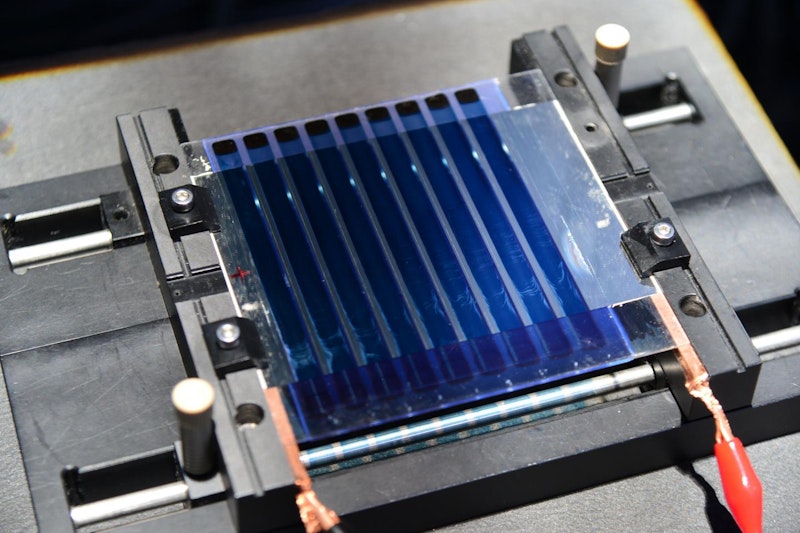 Researchers in Korea have successfully developed a high-efficiency large-area organic solution processable solar cell by controlling the speed at which the solution of raw materials for solar cells became solidified after being coated. The team led by Dr Hae Jung Son from the Photo-electronic Hybrids Research Center of the Korea Institute of Science and Technology (KIST) announced that they have identified the difference in the mechanism of film formation between a small area and a large area of organic solar cells in a solution process and, by resolving the issue concerning the related process technology, developed a high-efficiency large-area organic photovoltaics.
If a photovoltaic material is made in the form of paint that can be applied to any surface, such as the exterior of a building or a car, it will be possible to achieve energy self-sufficiency and provide low-cost eco-friendly energy to those suffering from energy poverty. Not only that, it will be easy to utilize space for installation of photovoltaics even on urban buildings, and ideally, the photovoltaic panels will be maintained by re-applying the "paint." For further information see the IDTechEx report on Materials Opportunities in Emerging Photovoltaics 2020-2040.
When it comes to solution processable solar cells, which work by coating the surface with the solar cell solution, the photoactive area that generates electricity still remain on a laboratory scale (less than 0.1?). When applied to a large area to produce sufficient electric power for it to be practical, there are issues related reduced performance and reproducibility due to material- and process-related limitations, and this has been an obstacle to commercialization.
Dr. Son's team at KIST revealed that commercially available organic materials become easily crystallized, which makes them unsuitable for large-area solution processes. In the case of the large-area solution process for industrial uses, the process through which the solvent in which the solar cell material is dissolved evaporates to form a film occurs slowly, thereby resulting in agglomeration and other phenomena, and this in turn lowers the efficiency of the solar cell. As for the spin coating method, which is a small-area process employed in laboratory research, the substrated is rapidly rotated during the film formation process in order to speed up the solvent evaporation, and this makes it possible to form a film without the aforementioned problem concerning reduced efficiency.
Based on this information, KIST researchers developed high-performance large-area organic photovoltaics by controlling the solvent evaporation rate following the coating step in a large-area solution process as a way to form a film optimized for solar cell performance. As a result, high-efficiency large-area organic photovoltaics with 30% higher power conversion efficiency than existing photovoltaics were attained.
Dr. Son said, "The core design principles of solar cell materials capable of high-quality large-area using the solution will accelerate the development of solution processable solar cells in the future. (This study) has contributed to not only raising the efficiency of next-generation solution processable solar cells but also the development of core technology for manufacturing large-area solar cell materials required for commercialization."
Source and top image: National Research Council of Science and Technology