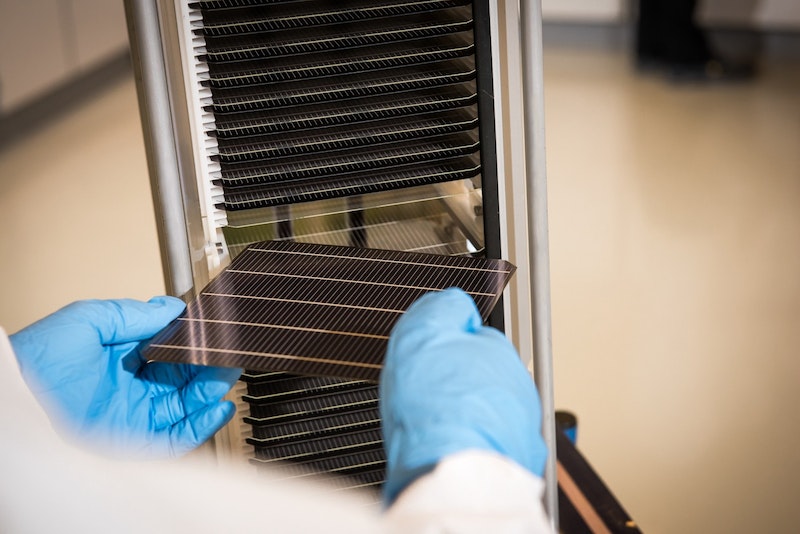 Revolutionary perovskite solar technology has set a new world record for the amount of the sun's energy that can be converted into electricity by a single solar cell.
The ground-breaking cell produced by Oxford PV has been independently proven to convert 29.52% of solar energy into electricity. In contrast, standard silicon cells used on millions of homes globally have an average conversion rate of just 15-20% and a practical maximum conversion rate of around 26%.
Solar is crucial in decarbonising the world's energy supply and is predicted to provide 50% of global electricity generation by 2050. For further information see the IDTechEx report on Perovskite Photovoltaics 2018-2028.
The technology used in Oxford PV's record-breaking cell involves coating ordinary silicon solar cells with a thin film of the material perovskite to better utilise photons across the solar spectrum. The synthetic perovskite material is affordable, sustainable and eventually could replace silicon entirely - 35 kg of perovskite generates the same amount of power as seven tons of silicon.
In 2022, Oxford PV will be the first company to sell these next-generation solar cells to the public. Initial products, designed for residential roofs, will generate 20% more power from the same number of cells. With further development, Oxford PV believes future solar cells be improved significantly.
Frank P. Averdung, Chief Executive Officer at Oxford PV, said: "Achieving another world record is a fantastic milestone for our perovskite based solar cell, as it demonstrates that we are one step closer to the provision of highly powerful and lower cost solar energy. We are thrilled to be at the heart of the solar revolution and play a vital role in decarbonising the world's energy supply. We are currently at a global tipping point - climate change is dramatically worsening and the need to use alternative forms of energy has never been greater. Our solar cells are critical in accelerating the adoption rate of solar and tackling the ever-worsening issue of climate change. We have a clear roadmap to take this technology beyond 30%."
Dr Chris Case, Chief Technology Officer at Oxford PV, commented: "This perovskite on silicon solar has at 29.52%, certified by the National Renewable Energy Laboratory (Golden, Colorado, USA), not only breaking our Company record but breaking the performance record of 29.2% for any solar cell material (GaAs). Our solar cells and modules not only demonstrate record efficiency but have passed externally measured industry standard reliability tests from the International Electrotechnical Commission. The considerable progress we have made is thanks to our dedicated and skilled scientists and engineers in the UK and a validation of the entire global perovskite research community who have been contributing to making perovskite successful. Our innovative approach is a breakthrough for solar power efficiency and will be instrumental in paving the way for an all-electric future."
Source and top image: Oxford PV