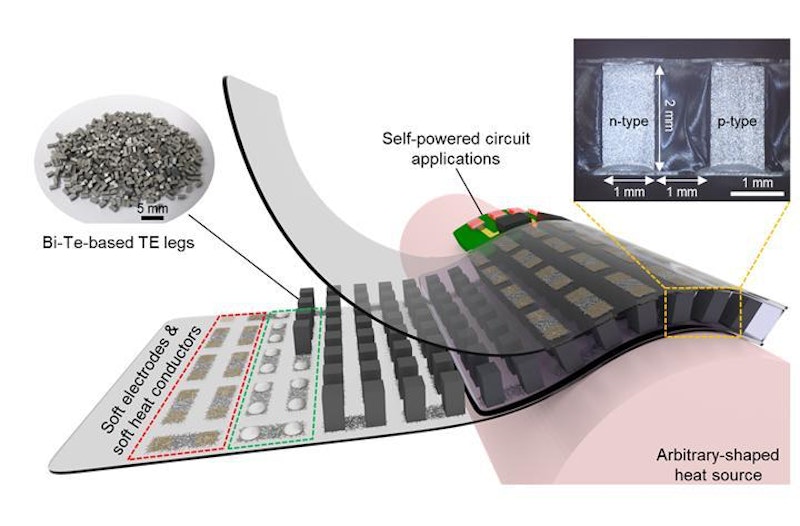 A thermoelectric device is an energy conversion device that utilizes the voltage generated by the temperature difference between both ends of a material; it is capable of converting heat energy, such as waste heat from industrial sites, into electricity that can be used in daily life. Existing thermoelectric devices are rigid because they are composed of hard metal-based electrodes and semiconductors, hindering the full absorption of heat sources from uneven surfaces. Therefore, recent studies were actively conducted on the development of flexible thermoelectric devices capable of generating energy in close contact with various heat sources such as human skins and hot water pipes.
The Korea Institute of Science and Technology (KIST) announced that a collaborative research team led by Dr. Seungjun Chung from the Soft Hybrid Materials Research Center and Professor Yongtaek Hong from the Department of Electrical and Computer Engineering at Seoul National University (SNU) developed flexible thermoelectric devices with high power generation performance by maximizing flexibility and heat transfer efficiency. The research team also presented a mass-production plan through an automated process including a printing process. For further information see the IDTechEx report on Energy Harvesting for Electronic Devices 2020-2040.
Concerning existing substrates used for research on flexible thermoelectric devices, their heat energy transfer efficiency is low as a result of very low thermal conductivity. Their heat absorption efficiency is also low due to lack of flexibility, forming a heat shield layer, e.g., air, when in contact with a heat source. To address this issue, organic-material-based thermoelectric devices with high flexibility have been under development, but their application on wearables is not easy because of its significantly lower performance compared to existing inorganic-material-based rigid thermoelectric devices.
The aforementioned research team improved the flexibility while lowering the resistance of the thermoelectric device by connecting an inorganic-material-based high-performance thermoelectric device to a stretchable substrate composed of silver nanowires. The developed thermoelectric device showed excellent flexibility, thereby allowing stable operation even when it is bent or stretched. In addition, metal particles with high thermal conductivity were inserted inside the stretchable substrate to increase the heat transfer capacity by 800% (1.4 W/mK) and power generation by a factor higher than three. (When the temperature difference was 40 or more between both ends of the developed thermoelectric device, 7 mW/cm2 of electricity was generated. When attached to human skin, 7 μW/cm2 of electricity was generated from the body temperature only.) Simultaneously, the researchers automated the entire complex process, from the soft-platform process to the development of the thermoelectric device, thus enabling mass-production of the device.
The developed device can be used as a high-temperature sensor in industrial sites or as a battery-free distance detection sensor for autonomous driving by using the temperature difference inside and outside of a car. Consequently, the device is expected to be able to solve the power-source issue for a battery-based sensor system, which has a risk of explosion in high-temperature environments.
Dr. Seungjun Chung, with KIST, said: "This research showed that it is possible to operate actual wearables such as high-temperature sensor gloves using external heat sources. Going forward, we will develop a flexible thermoelectric platform that can operate wearables with only body temperature." He went on to say: "Our research findings are significant in that the functional composite material, thermoelectric device platform, and high-yield automated process developed in this study will be able to contribute to the commercialization of battery-free wearables in the future."
Source and top image: National Research Council of Science and Technology

Hi Whether A thermoelectric device has been commercialized.