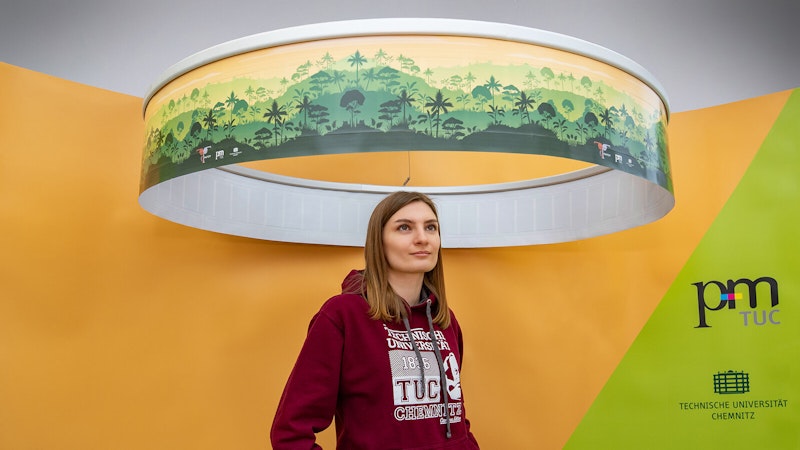 If the Institute for Print and Media Technology at Chemnitz University of Technology has its way, many loudspeakers of the future will not only be as thin as paper, but will also sound impressive. This is a reality in the laboratories of the Chemnitz researchers, who back in 2015 developed the multiple award-winning T-Book - a large-format illustrated book equipped with printed electronics. If you turn a page, it begins to sound through a speaker invisibly located inside the sheet of paper. "The T-Book was and is a milestone in the development of printed electronics, but development is continuing all the time," says Prof. Dr. Arved C. Hübler, under whose leadership this technology trend, which is becoming increasingly important worldwide, has been driven forward for more than 20 years.
From single-sheet production to roll-to-roll printing
Five years ago, the sonorous paper loudspeakers from Chemnitz were still manufactured in a semi-automatic single-sheet production process. In this process, ordinary paper or foils are printed with two layers of a conductive organic polymer as electrodes. A piezoelectric layer is sandwiched between them as the active element, which causes the paper or film to vibrate. Loud and clear sound is produced by air displacement. The two sides of the speaker paper can be printed in color. Since this was only possible in individual sheets in limited formats, the efficiency of this relatively slow manufacturing process is very low. That's why researchers at the Institute of Print and Media Technology have been looking for a new way towards cost-effective mass production since May 2017. For further information see the IDTechEx report on Electronics Reshaped 2020-2040.
The aim of their latest project, roll-to-roll printed speaker paper (T-Paper for short), was therefore to convert sheet production into roll production. "Researchers from the fields of print media technology, chemistry, physics, acoustics, electrical engineering, and economics from six nations developed a continuous, highly productive, and reliable roll production of loudspeaker webs," reports project manager Georg C. Schmidt. Not only did they use the roll-to-roll (R2R) printing process for this, but they also developed inline technologies for other process steps, such as the lamination of functional layers. "This allows electronics to be embedded in the paper - invisibly and protected," says Hübler. In addition, he says, inline polarization of piezoelectric polymer layers has been achieved for the first time and complete inline process monitoring of the printed functional layers is possible. The final project results were published in the renowned journal Advanced Materials in January 2021.
Long and lightweight paper loudspeaker webs for museums, the advertising industry, and Industry 4.0
The potential of loudspeaker paper was extended to other areas of application in the T-Paper project. For example, meter-long loudspeaker installations can now be manufactured in web form or as a circle (T-RING). "In our T-RING prototype, an almost four-meter-long track with 56 individual loudspeakers was connected to form seven segments and shaped into a circle, making a 360° surround sound installation possible," says Schmidt. The speaker track, including printed circuitry, weighs just 150 grams and consists of 90 percent conventional paper that can be printed in color on both sides. "This means that low-cost infotainment solutions are now possible in museums, at trade shows and in the advertising industry, for example. In public buildings, for example, very homogeneous sound reinforcement of long stretches such as corridors is possible. But the process technology itself could also become interesting for other areas, such as the production of inline measurement systems for Industry 4.0," says the project manager, looking to the future.
Source and top image: Chemnitz University of Technology