Wearable Device Turns the Body into a Battery 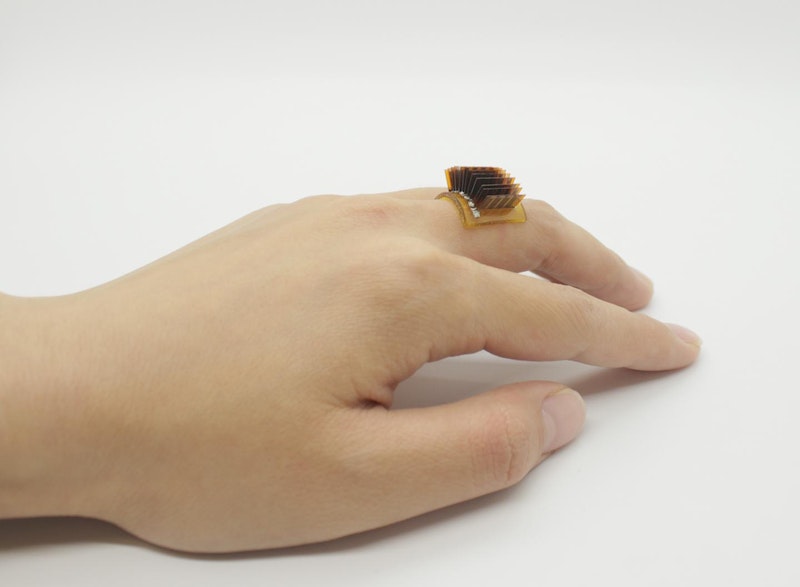 Researchers at the University of Colorado Boulder have developed a new, low-cost wearable device that transforms the human body into a biological battery.
The device, described in the journal Science Advances, is stretchy enough that you can wear it like a ring, a bracelet or any other accessory that touches your skin. It also taps into a person's natural heat--employing thermoelectric generators to convert the body's internal temperature into electricity.
"In the future, we want to be able to power your wearable electronics without having to include a battery," said Jianliang Xiao, senior author of the new paper and an associate professor in the Paul M. Rady Department of Mechanical Engineering at CU Boulder. For further information see the IDTechEx report on Energy Harvesting Microwatt to Gigawatt: Opportunities 2020-2040.
The concept may sound like something out of The Matrix film series, in which a race of robots have enslaved humans to harvest their precious organic energy. Xiao and his colleagues aren't that ambitious: Their devices can generate about 1 volt of energy for every square centimeter of skin space--less voltage per area than what most existing batteries provide but still enough to power electronics like watches or fitness trackers. Scientists have previously experimented with similar thermoelectric wearable devices, but Xiao's is stretchy, can heal itself when damaged and is fully recyclable--making it a cleaner alternative to traditional electronics.
"Whenever you use a battery, you're depleting that battery and will, eventually, need to replace it," Xiao said. "The nice thing about our thermoelectric device is that you can wear it, and it provides you with constant power."
High-tech bling
The project isn't Xiao's first attempt to meld human with robot. He and his colleagues previously experimented with designing "electronic skin," wearable devices that look, and behave, much like real human skin. That android epidermis, however, has to be connected to an external power source to work. Until now. The group's latest innovation begins with a base made out of a stretchy material called polyimine. The scientists then stick a series of thin thermoelectric chips into that base, connecting them all with liquid metal wires. The final product looks like a cross between a plastic bracelet and a miniature computer motherboard or maybe a techy diamond ring.
"Our design makes the whole system stretchable without introducing much strain to the thermoelectric material, which can be really brittle," Xiao said.
Just pretend that you're out for a jog. As you exercise, your body heats up, and that heat will radiate out to the cool air around you. Xiao's device captures that flow of energy rather than letting it go to waste.
"The thermoelectric generators are in close contact with the human body, and they can use the heat that would normally be dissipated into the environment," he said.
Lego blocks
He added that you can easily boost that power by adding in more blocks of generators. In that sense, he compares his design to a popular children's toy.
"What I can do is combine these smaller units to get a bigger unit," he said. "It's like putting together a bunch of small Lego pieces to make a large structure. It gives you a lot of options for customization."
Xiao and his colleagues calculated, for example, that a person taking a brisk walk could use a device the size of a typical sports wristband to generate about 5 volts of electricity--which is more than what many watch batteries can muster.
Like Xiao's electronic skin, the new devices are as resilient as biological tissue. If your device tears, for example, you can pinch together the broken ends, and they'll seal back up in just a few minutes. And when you're done with the device, you can dunk it into a special solution that will separate out the electronic components and dissolve the polyimine base--each and every one of those ingredients can then be reused.
"We're trying to make our devices as cheap and reliable as possible, while also having as close to zero impact on the environment as possible," Xiao said.
While there are still kinks to work out in the design, he thinks that his group's devices could appear on the market in five to 10 years.
Source and top image: University of Colorado at Boulder