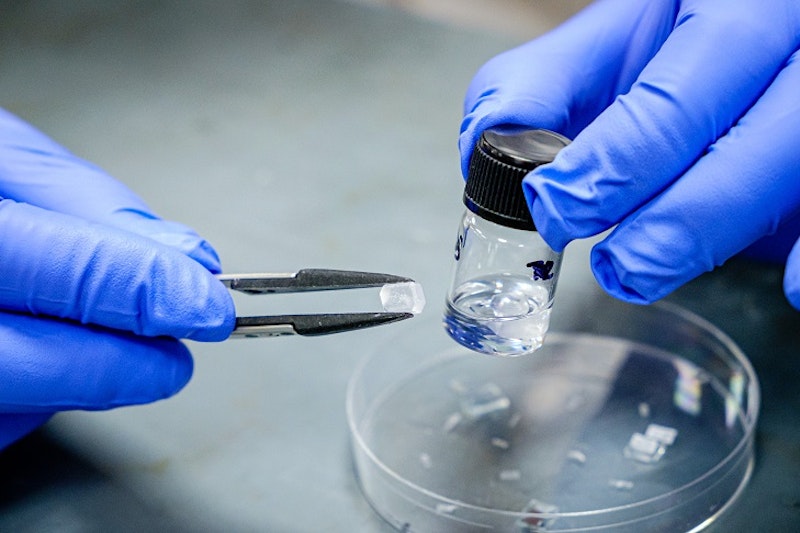 A team of researchers led by Nanyang Technological University, Singapore (NTU Singapore) has developed a new material, that when electricity is applied to it, can flex and bend forty times more than its competitors, opening the way to better micro machines. Conversely, when it is bent, it generates electricity very effectively and could be used for better "energy harvesting" - potentially recharging batteries in gadgets just from everyday movements.
The novel material is both electrostrictive and piezoelectric. Its electrostrictive properties means it can change shape when an electric current is applied, while piezoelectric means the material can convert pressure into electric charges. When an electric field is applied, the atoms that make up electrostrictive materials shift, causing the material to deform and flex. When piezoelectrics are compressed, the pressure is converted to electric charges which accumulate in the material. For further information see the IDTechEx report on Energy Harvesting Microwatt to Gigawatt: Opportunities 2020-2040.
The scientists found that when an electric field is applied, the new hybrid material could be strained up to 22 per cent, the highest strain reported in a piezoelectric material so far. This far surpasses conventional piezoelectric materials that only deform up to 0.5 per cent when a current is passed through it. The new material is also more energy-efficient than other piezoelectric and electrostrictive materials.
Piezoelectric materials are commonly used in guitars, loudspeakers, sensors and electric motors. For instance, a piezoelectric pick-up is a device used in an electric guitar to convert the vibrations from the strings into an electric signal, which is then processed for music recording or to be amplified through loudspeakers. Ferroelectric crystals were first discovered in 1920 and have been used to make piezoelectrics for over 70 years, as they are easily integrated into electrical devices. However, they are brittle and inflexible, bending only 0.5 per cent, which largely limits their application in electronic devices such as actuators (parts that convert an electric control signal into mechanical motion, for example, a valve that opens and closes).
Some ferroelectrics also contain lead, which is toxic, and its presence in piezoelectric devices is one of the reasons why electronic waste is challenging to recycle. Traditional ferroelectrics such as perovskite oxides are also unsuitable for flexible electrical devices that are in contact with the skin, such as wearable biomedical devices that track heart rate.
Published in the scientific journal Nature Materials last month, the new material was created at NTU by Professor Fan Hong Jin from the School of Physical & Mathematical Sciences and his team, including his PhD student Mr Hu Yuzhong who is the first author of this paper. Also part of the team is Professor Junling Wang from the Southern University of Science and Technology, China, a former NTU professor at the School of Materials Science and Engineering.
Prof Fan said, "Being more than 40 times more flexible than similar electrostrictive materials, the new ferroelectric material may be used in highly efficient devices such as actuators and sensors that flex when an electric field is applied. With its superior piezoelectric properties, the material can also be used in mechanical devices that harvest energy when bent, which will be useful to recharge wearable devices. We think we can substantially improve on this performance in future by further optimising the chemical composition, and we believe this type of material could play a key role in the development of wearable devices for the Internet of Things (IOT), one of the key technologies enabling the 4th Industrial Revolution."
Developing a flexible ferroelectric material
To develop a flexible ferroelectric material, the researchers modified the chemical structure of a hybrid ferroelectric compound C6H5N(CH3)3CdCl3, or PCCF in short, which can potentially bend up to a hundred times more than traditional ferroelectrics. To increase the material's range of movement further, the scientists modified the chemical makeup of the compound by substituting some of its chlorine (Cl) atoms for bromine (Br), which has a similar size to chlorine, to weaken the chemical bonds at specific points in the structure. This made the material more flexible without affecting its piezoelectric qualities.
The new material is easy to manufacture, requiring only solution-based processing in which the crystal forms as the liquid evaporates, unlike typical ferroelectric crystals that require the use of high-powered lasers and energy to form. When an electric field was applied to the new PCCF compound, the atoms in it shifted substantially more than the atoms in most conventional ferroelectrics, straining up to 22 per cent far more than conventional piezoelectric materials.
Source and top image Nanyang Technological University