A Magnetic Twist to Graphene 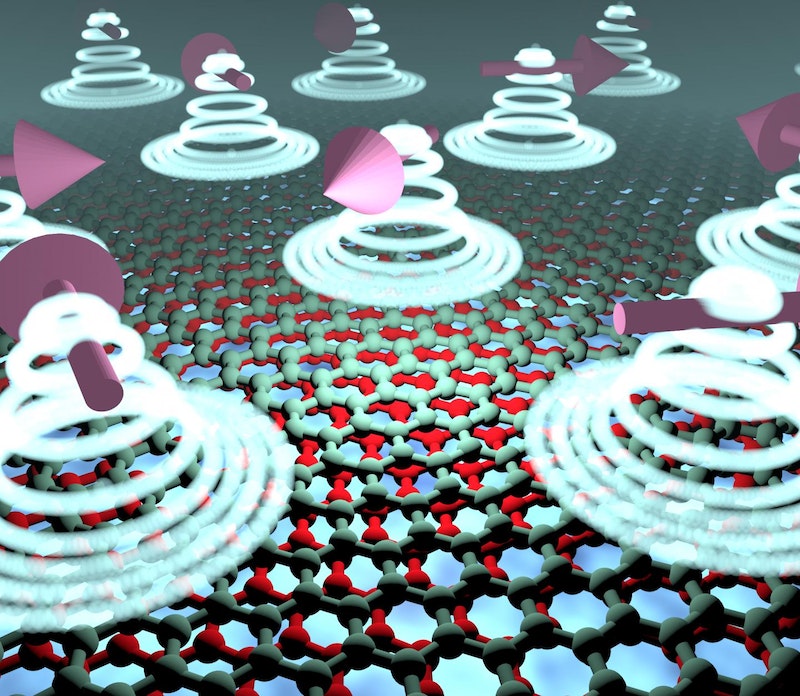 Electrons in materials have a property known as 'spin', which is responsible for a variety of properties, the most well-known of which is magnetism. Permanent magnets, like the ones used for refrigerator doors, have all the spins in their electrons aligned in the same direction. Scientists refer to this behaviour as ferromagnetism, and the research field of trying to manipulate spin as spintronics.
Down in the quantum world, spins can arrange in more exotic ways, giving rise to frustrated states and entangled magnets. Interestingly, a property similar to spin, known as "the valley," appears in graphene materials. This unique feature has given rise to the field of valleytronics, which aims to exploit the valley property for emergent physics and information processing, very much like spintronics relies on pure spin physics. For further information see the IDTechEx report on Graphene Market & 2D Materials Assessment 2021-2031.
'Valleytronics would potentially allow encoding information in the quantum valley degree of freedom, similar to how electronics do it with charge and spintronics with the spin.' Explains Professor Jose Lado, from Aalto's Department of applied physics, and one of the authors of the work. 'What's more, valleytronic devices would offer a dramatic increase in the processing speeds in comparison with electronics, and with much higher stability towards magnetic field noise in comparison with spintronic devices.'
Structures made of rotated, ultra-thin materials provide a rich solid-state platform for designing novel devices. In particular, slightly twisted graphene layers have recently been shown to have exciting unconventional properties, that can ultimately lead to a new family of materials for quantum technologies. These unconventional states which are already being explored depend on electrical charge or spin. The open question is if the valley can also lead to its own family of exciting states.
Making materials for valleytronics
For this goal, it turns out that conventional ferromagnets play a vital role, pushing graphene to the realms of valley physics. In a recent work, Ph.D. student Tobias Wolf, together with Profs. Oded Zilberberg and Gianni Blatter at ETH Zurich, and Prof. Jose Lado at Aalto University, showed a new direction for correlated physics in magnetic van der Waals materials.
The team showed that sandwiching two slightly rotated layers of graphene between a ferromagnetic insulator provides a unique setting for new electronic states. The combination of ferromagnets, graphene's twist engineering, and relativistic effects force the "valley" property to dominate the electrons behaviour in the material. In particular, the researchers showed how these valley-only states can be tuned electrically, providing a materials platform in which valley-only states can be generated. Building on top of the recent breakthrough in spintronics and van der Waals materials, valley physics in magnetic twisted van der Waals multilayers opens the door to the new realm of correlated twisted valleytronics.
'Demonstrating these states represents the starting point towards new exotic entangled valley states.' Said Professor Lado, 'Ultimately, engineering these valley states can allow realizing quantum entangled valley liquids and fractional quantum valley Hall states. These two exotic states of matter have not been found in nature yet, and would open exciting possibilities towards a potentially new graphene-based platform for topological quantum computing.'
Source and top image: Aalto University

Please keep me on your online team if any collaboration needed on valley electronic states of graphene layers sandwiched between magnetic insulators. Kudos to Aalato and ETH team!