The Future of Electronics is Stretchy 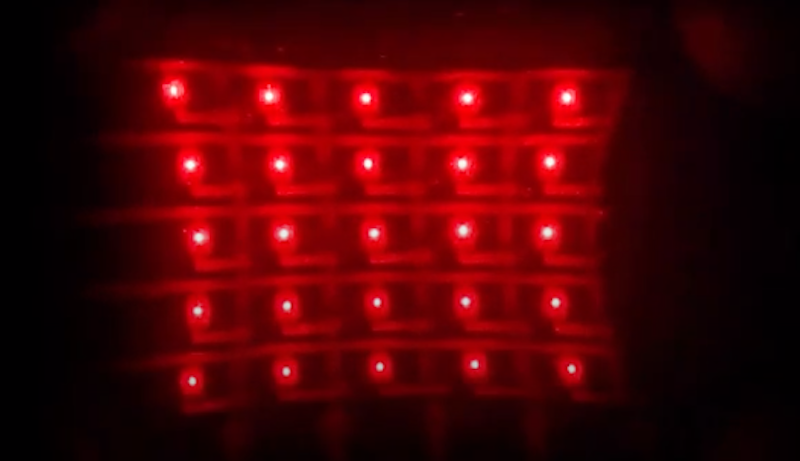 Stretchable electronic circuits are critical for soft robotics, wearable technologies, and biomedical applications. The current ways of making them, though, have limited their potential.
A team of researchers in the Yale lab of Rebecca Kramer-Bottiglio, the John J. Lee Assistant Professor of Mechanical Engineering & Materials Science, has developed a material and fabrication process that can rapidly make these devices stretchier, more durable, and closer to being ready for mass manufacturing. The results are published in the journal Nature Materials. For further information see the IDTechEx report on Flexible, Printed and Organic Electronics 2020-2030: Forecasts, Technologies, Markets.
One of the biggest challenges for this area of electronics is to reliably connect stretchable conductors with the rigid materials used in commercially available electronics components, such as resistors, capacitors, and light-emitting diodes (LEDs).
"The problem is that it's difficult to connect something soft with something rigid," said Shanliangzi Liu, lead author of the paper and a former Ph.D. student in Kramer-Bottiiglio's lab. When the stretchable materials bend and elongate, a large shear force develops at the interface and often rips apart the connection to make the circuit unusable.
A material known as eutectic gallium-indium (eGaIn), which maintains a liquid form at room temperature, has been used for connections in stretchable electronics, but its high surface tension keeps it from connecting properly to rigid components. Various strategies have been used to get around this problem, but at the cost of limiting the stretchability and durability of the resulting circuits.
Kramer-Bottiglio's lab took a different approach by using eGaIn nanoparticles to develop a new material — biphasic Ga-In (bGaIn) — which has both solid and liquid elements. When heated to 900 degrees C, a nanoparticle film of eGaIn changes form, developing a thin, solid oxide layer on top with a thick layer of solid particles embedded in liquid eGaIn. When peeled off, the material is transferred to stretchable substrates, similar to how temporary tattoos work.
With a robust interface between bGaIn and rigid electronic components, the result is a stretchable circuit board assembly that performs as well as a conventional one, even under high levels of strain. The approach opens up opportunities to create stretchable circuits for a wide range of industrial applications, including soft displays and smart garments.
To demonstrate the process, the team used it to build a number of devices, including an amplifier circuit that could be stretched to at least five times its original length, a stretchable "Yale" LED array, and a multilayer signal conditioning circuit board integrated with a stretchable sensor attached to the surface of a user's shirt sleeve. The circuits were also applied to a latex balloon and "hand-written" onto a very porous foam.
"The key here is that the whole circuit is stretchable," said co-author Dylan Shah, a Ph.D. student in Kramer-Bottiglio's lab. "Previous circuits used in soft robots had a combination of small areas that didn't stretch, and then stretchable areas. Since our circuits have a conductor and interface that are both stretchable, they are much more elastic and flexible."
For this study, the researchers used transfer printing, which requires a manual step. Liu, who is now a postdoctoral associate at Northwestern University, said that one of the next steps with the research is to modify the bGaIn ink for printability, so that it can be seamlessly integrated into automated circuit manufacturing lines.
Source and top image: Yale University