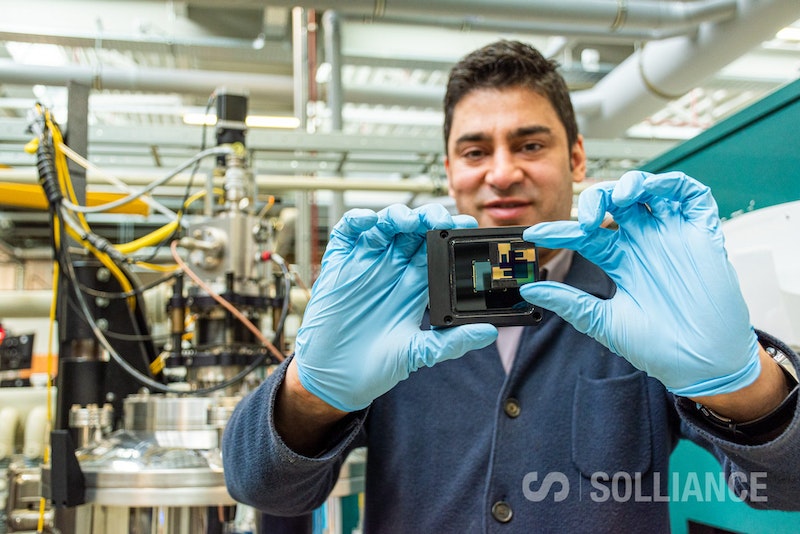 Solliance partners TNO, imec/EnergyVille and the Eindhoven University of Technology, realized a 18.6% efficient highly near infrared transparent perovskite solar cell. When combined in a four terminal tandem configuration with an efficient Panasonic crystalline silicon (c-Si) cell or with a Miasolé flexible CIGS cell, delivers new record power conversion efficiencies of 28.7% and 27.0%, respectively.
Tandem technology offers a viable and attractive route to increase the efficiency of commercial solar cells and modules. Four terminal tandems allow to build on experience and practices already available in the industry. In addition, four terminal perovskite/c-Si tandems can be applied broadly and are, for example, very beneficial in combination with bifacial c-Si solar cells which, depending on the actual albedo, can readily achieve a total power generation density as high as 320 W/m². For further information see the IDTechEx report on Energy Harvesting Microwatt to Gigawatt: Opportunities 2020-2040.
For this breakthrough, the expertises in perovskite solar cell processing and performance optimization of Solliance partners TNO, imec/EnergyVille and TU/e were combined to develop an efficient and highly near infrared transparent perovskite solar cell with an efficiency of 18.6%.
This perovskite solar cell was combined with different architectures of bottom solar cells and even with different cell technologies, which demonstrates the wide applicability of the 4-terminal tandem approach:
All of these results are more than 1.5% absolute efficiency improvements of earlier records obtained within the Solliance collaboration.
The lab scale perovskite solar cell has a size of 9 mm2. The performance measurement of the four terminal tandem was carried out according to a generally accepted procedure (J. Werner et al. ACS Energy Letters, vol. 1, pp. 474, 2016).
"This performance was achieved by tuning the opto-electrical properties of the perovskite solar cell to better match the optical properties of the bottom cell." says Dr. Dong Zhang of TNO/Solliance. "Next, we determined the loss factors in the four terminal configuration and minimized these step by step" Dr. Zhang continues. "Finally, we optimized the light management of the complete tandem device, in other words, we maximized light absorption in the tandem solar cell."
"These excellent results form the basis for the next phase in the development, which includes upscaling of the area and the processes." says Dr Mehrdad Najafi of TNO/Solliance. "Currently, low-cost upscaling processes for large area modules and maintaining the same performance are being developed by the Solliance partners TNO and imec/EnergyVille." concludes Dr. Najafi.
Source and top image: Sollliance