Organic, Printable Device Could Restore Sight to the Blind 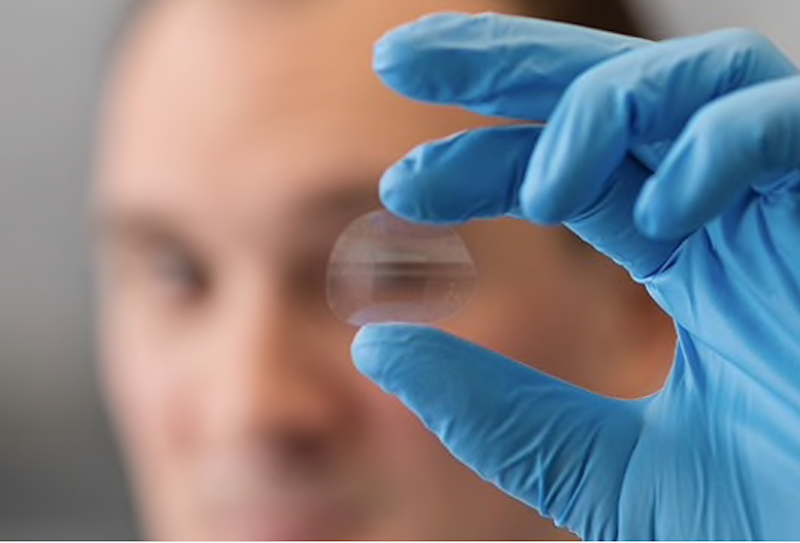 A researcher at the University of Sydney is developing a printable device that acts like a retina and could one day restore sight to blind people. Dr Matthew Griffith, from the Australian Centre for Microscopy & Microanalysis and the School of Aerospace, Mechanical and Mechatronic Engineering, has created an electrical device from multi-coloured carbon-based semiconductors -that uses absorbed light to fire the neurons that transmit signals from the eyes to the brain, acting as an artificial retina for those who have lost this capacity.
The retina is the thin layer of tissue that lines the back of the eye which functions to receive light, convert it into neural signals, and send these signals to the brain for processing. For further reading see the IDTechEx report on Flexible Electronics in Healthcare 2020-2030.
"Worldwide, the number of people living with vision impairment is at least 2.2 billion. Our research aims to provide a biomedical solution to those experiencing blindness from retinitis pigmentosa and age-related macular degeneration (AMD), the second being one of the leading causes of blindness in the world," said Dr Griffith.
Dr Griffith hopes to ultimately apply this technology, a type of neural interface, to restore sensory function to those with spinal cord injuries, and to treat people with neurodegenerative diseases. A neural interface is a device that interacts with an individual's nervous system to record or stimulate activity.
"Among other functions, neurons are the body's signal conductors. A missing neuron link, which can be caused by, for example, a spinal cord injury, can cause severe problems. It can also be debilitating if neurons misfire - this can cause blindness and deafness, as well as diseases like Parkinson's and epilepsy, for which there is no cure," he said. "Neural interfaces can bridge this neuronal divide, or, in the case of misfiring, re-program the neurons."
Dr Griffith's device can be printed using the same, low-cost method as newspaper printing, with a high-speed roll to roll press.
"Similar technologies are being intensively developed, though our device differs in that it is made of carbon - the same building block as human cells," Dr Griffith said. "Other devices tend to be rigid and usually made of silicon or metal, which can present problems integrating with the human body that is soft and flexible. Our organic device is designed with this issue in mind." Dr Griffith has been awarded an NHMRC Ideas grant to continue work on the project together with colleagues from the University of Sydney and neurobiologists from the University of Newcastle.
It is intended that the device will be printed onto soft and flexible surfaces from water-based inks that contain nerve growth factors and then inserted into a patient's retina by a surgeon. Once the relevant neurons reconnect to it, the retina will regain lost functionality when stimulated with light. At this stage, Dr Griffith and his team have conducted experiments using neurons from the spinal cord and eyes of mice. Early experiments examined the growth of mice neuronal cells onto the semiconductors in a petri dish, after which the electrical activity of the neurons was tested.
"Not only did these cells survive - they grew and maintained neural functionality," Dr Griffith said. "The next step is to control where they grow by printing nanopatterns. This is so in future, we can direct them to grow into specific bodily locations, like a spinal cord or retina."
Comparable technologies are attempting to replicate both the eye and the brain in an effort to restore sight. Yet, this method requires a more sophisticated approach.
"Patients do get some vision back, which is definitely life-changing for those without sight. However, it's not what you or I would think of as high-fidelity vision. Current state-of-the-art produces large blurry shapes in black and white," Dr Griffith said. Another key difference is that Dr Griffith's device does not require any electricity - it is powered internally by light from the outside world. "If successful, our device will help us progress towards solving one of the great scientific challenges of the 21st century; communicating with the human body's sensory network. We hope to achieve this using nothing but light, which opens up some really exciting prospects for the future of bioelectronic technology."
Source and top image: University of Sydney