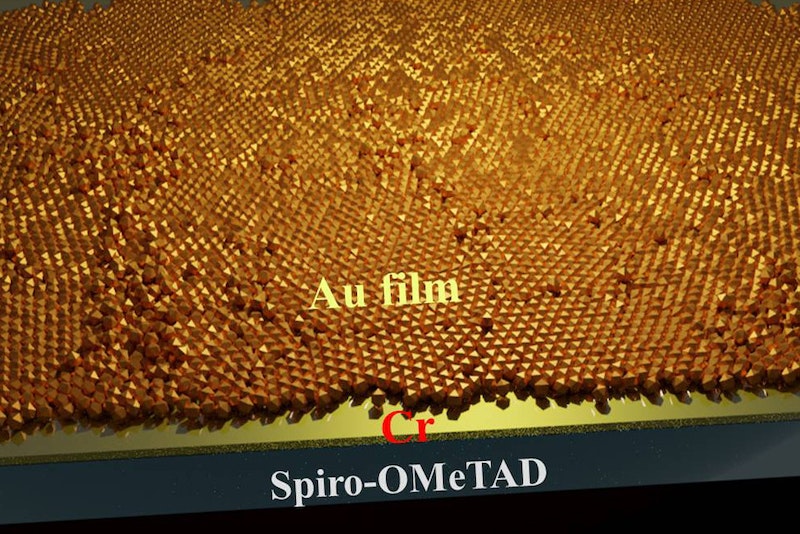 Developing new ultrathin metal electrodes has allowed researchers to create semitransparent perovskite solar cells that are highly efficient and can be coupled with traditional silicon cells to greatly boost the performance of both devices, said an international team of scientists. The research represents a step toward developing completely transparent solar cells.
"Transparent solar cells could someday find a place on windows in homes and office buildings, generating electricity from sunlight that would otherwise be wasted," said Kai Wang, assistant research professor of materials science and engineering at Penn State and co-author on the study. "This is a big step — we finally succeeded in making efficient, semitransparent solar cells."
Traditional solar cells are made from silicon, but scientists believe they are approaching the limits of the technology in the march to create ever more efficient solar cells. Perovskite cells offer a promising alternative and stacking them on top of the traditional cells can create more efficient tandem devices, the scientists said. For further information see the IDTechEx report on Transparent Electronics Materials, Markets 2021-2041.
"We've shown we can make electrodes from a very thin, almost few atomic layers of gold," said Shashank Priya, associate vice president for research and professor of materials science and engineering at Penn State. "The thin gold layer has high electrical conductivity and at the same time it doesn't interfere with the cell's ability to absorb sunlight."
The perovskite solar cell that the team developed achieved 19.8% efficiency, a record for a semitransparent cell. And when combined with a traditional silicon solar cell, the tandem device achieved 28.3% efficiency, up from 23.3% from the silicon cell alone. The scientists reported their findings in the journal Nano Energy.
"A 5% improvement in efficiency is giant," Priya said. "This basically means you are converting about 50 watts more sunlight for every square meter of solar cell material. Solar farms can consist of thousands of modules, so that adds up to a lot of electricity, and that's a big breakthrough."
In previous research, ultrathin gold film showed promise as a transparent electrode in perovskite solar cells, but issues in creating a uniform layer resulted in poor conductivity, the scientists said. The team found that chromium used as a seed layer allowed the gold to form on top in a continuous ultrathin layer with good conductive properties.
"Normally, if you grow a thin layer of something like gold, the nanoparticles will couple together and gather like small islands," said Dong Yang, assistant research professor of materials science and engineering at Penn State. "Chromium has a large surface energy that provides a good place for the gold to grow on top of, and it actually allows the gold to form a continuous thin film."
Perovskite solar cells are composed of five layers and other materials tested as transparent electrodes damaged or degraded layers of the cells. The scientists said solar cells made with the gold electrodes are stable and maintain high efficiencies over time in laboratory tests.
"This breakthrough in the design of tandem cell architecture based on a transparent electrode offers an efficient route toward the transition to perovskite and tandem solar cells," said Yang.
Source and top image: Penn State University